A new 338Canada/Maclean's projection: Why the Liberals are gaining ground

Philippe J. Fournier: After a disastrous winter and spring, the Liberals may be creeping back into contention 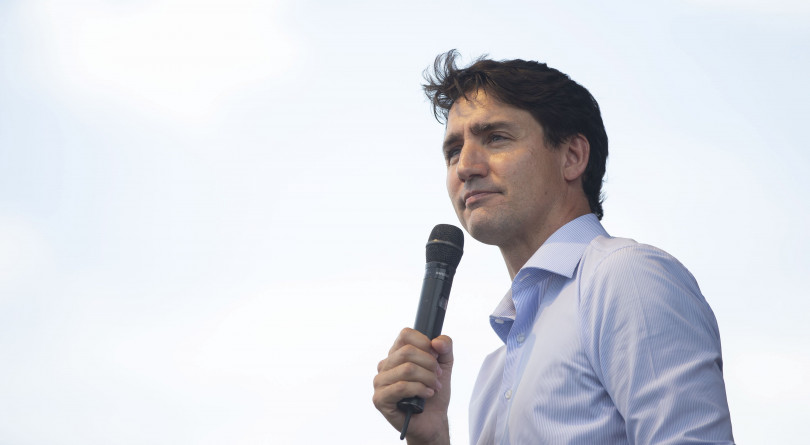 It’s July in Canada—time for BBQs, pool parties, Festival d’Été de Québec, Festival de Jazz de Montréal and the Calgary Stampede (and so much else). Who cares about politics, really?

But four months before a general election, politics do not take a summer break.

Three new polls were added to the federal projection this week and appear to confirm trends detected throughout June: after a disastrous winter and spring, the Liberals may be creeping back into contention.

First, a DART/Sun Media poll early last week gave a four-point lead to the Conservatives nationally, but had the Liberals in front in Ontario. Second, the Nanos weekly tracker placed the Liberals on top—a first since late February—by three points overall, and gaining ground in Ontario and the Atlantic provinces. Finally, Abacus Data released its latest numbers and, for the second consecutive month, has the Liberals and Conservatives in a statistical tie. (The complete list of federal polls is available here.)

These new polls were added to the 338Canada federal model and bring about significant movement in the seat projection. Let’s take a look.

The Conservative Party of Canada still holds the lead with an average of 34.6 per cent support. The good news for Andrew Scheer is that his support has been growing in Quebec and is now steadily above the 20 per cent mark (something Stephen Harper could not do in 2008, 2011, nor in 2015).

The bad news? His party has been slipping in Ontario. Some observers suggest this might partially be caused by Doug Ford’s growing unpopularity. Although we advise caution on cause-and-effect with polls, this hypothesis seems to have some merit: Abacus Data’s latest survey finds that 62 per cent of Ontarians have a negative impression of the Ontario premier, and only 20 per cent hold a positive impression. 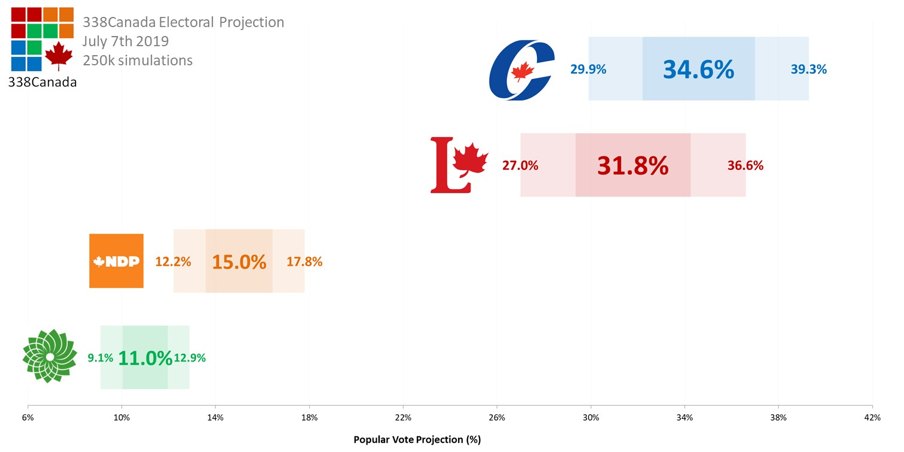 As mentioned above, the Liberal Party of Canada appears to be rebounding from its winter/spring slump. Its average support goes up to 31.8 per cent this week. And as you can see from the graph above, the confidence intervals of the LPC and CPC overlap significantly.

Let’s compare this popular vote projection with the polls that were published in the past week: 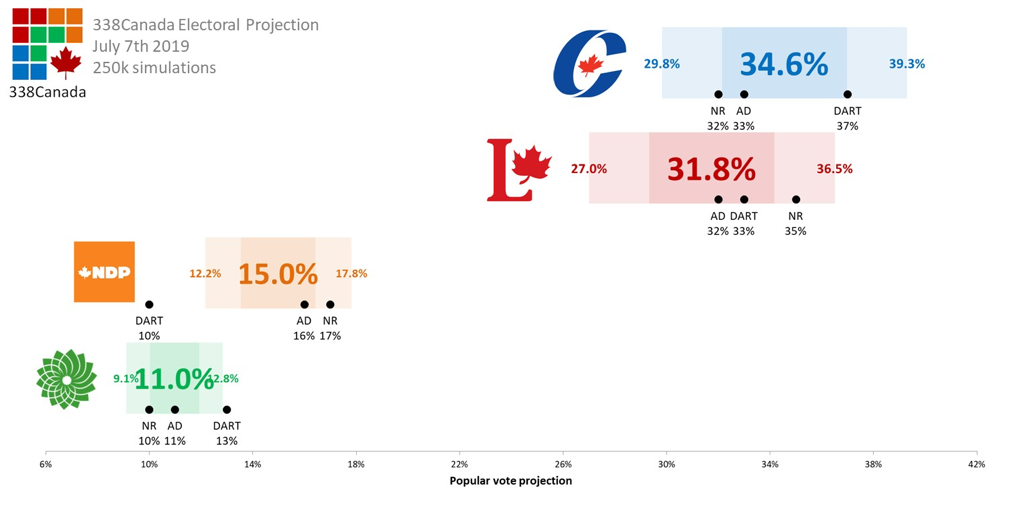 As you can see, all three polls from DART, Abacus Data (AD) and Nanos Research (NR) are pulling the LPC upwards. 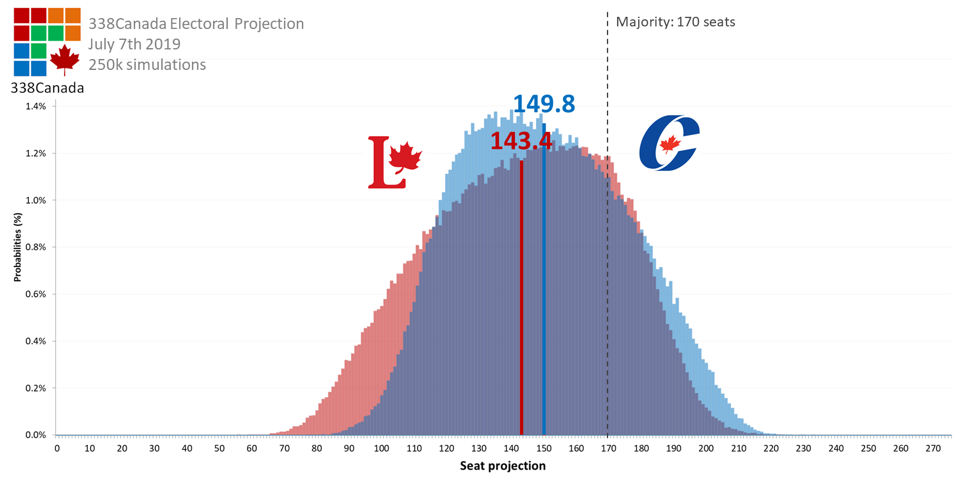 The curves overlap almost perfectly, although the overall average remains slightly higher for the Conservatives.

The NDP’s average remains roughly stable with 26 seats, significantly lower than its 2015 total: 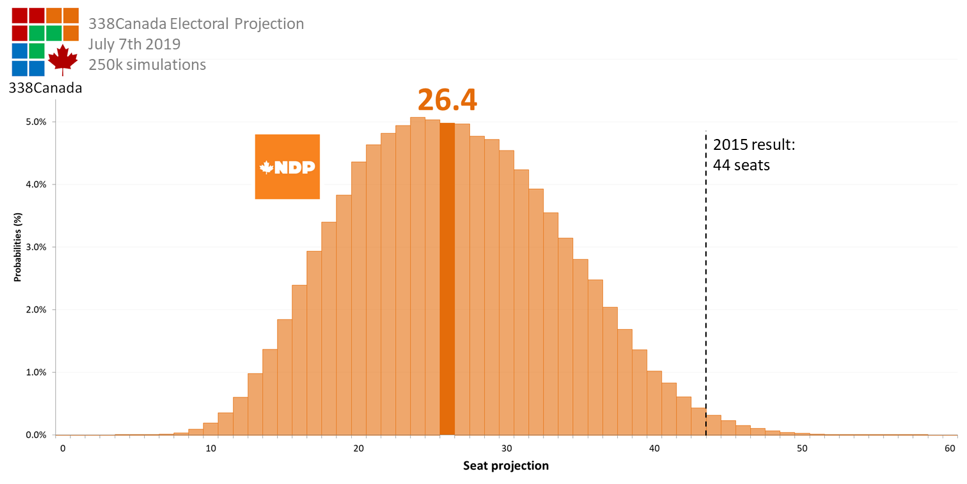 In Quebec, the Bloc Québécois’ average stands at 12 seats. It appears the Bloc has not (yet) been able to fully take advantage of the NDP’s collapse in the province. Nevertheless, it is undeniable that the Bloc is in better shape since Yves-François Blanchet was named BQ leader this winter.

Finally, the Greens win an average of 5 seats and are poised for net gains next fall should these numbers hold, or improve. However, winning seats outside Vancouver Island will be quite a challenge for Elizabeth May and her candidates. 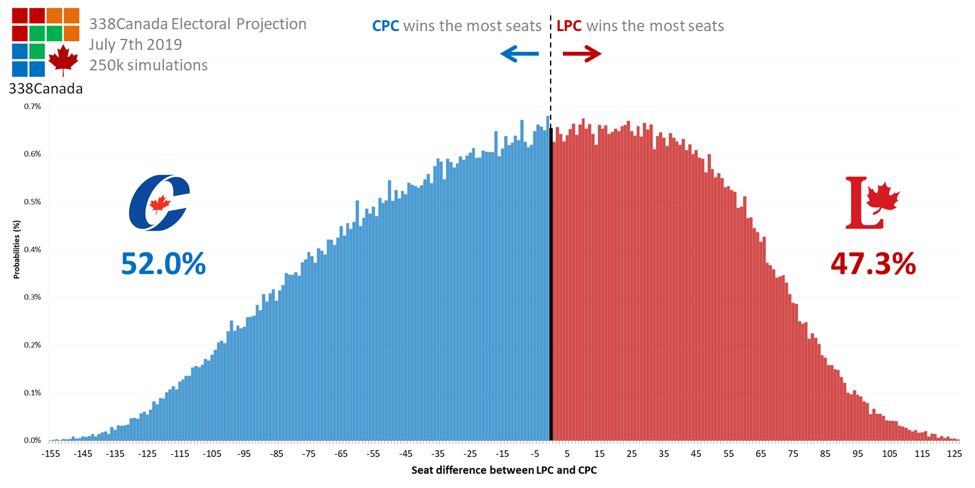 The Liberals win the most seats in 47.3 per cent of simulation. The remaining 0.7 per cent is for the unlikely scenario of a tie between the LPC and CPC.

Conservatives have led—and at times, dominated—the seat projection all spring, but in hindsight it appears that it was more a case of the Liberals shedding support than the Conservatives surging. While the CPC still polls well in the Western provinces and has recently gained moderate ground in Quebec, its latest slide in Ontario could be costly. The numbers above show Andrew Scheer will certainly have to tour Southwestern Ontario, the Hamilton-Niagara region and the 905 several times before the October 21 vote—without losing sight of the numerous three-way races in B.C. and Quebec.

For the Liberals, the stagnating NDP numbers have certainly been a blessing, but with the Greens now in double digits in every region except Alberta, Justin Trudeau has to show Green-leaning voters that he is the only alternative to the Conservatives’ much criticized environmental plan. It sure appears to be a daunting task.