Paul Wells on the result of Election 2021

A new vote projection points to a historic Green win in P.E.I.

Philippe J. Fournier: Uncertainty remains high but a simplified 338 electoral model puts the Green Party just above the threshold for a majority win 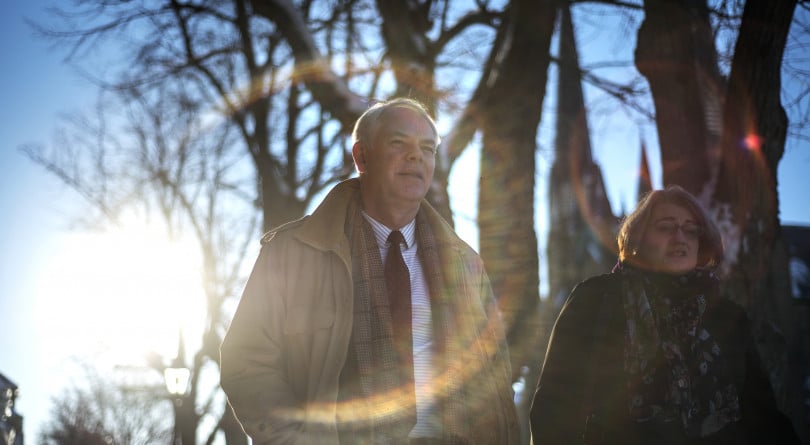 The 66th Prince Edward Island general election will be held this Tuesday. Rarely does P.E.I. politics get centre stage in the national Canadian media, but opinion polls conducted in the past months indicate that P.E.I. could soon be led by the very first Green Party government in Canadian history.

However, three main factors make the result of this election highly uncertain: 1) the low population per district (less than 100,000 voters for 27 electoral districts); 2) the scarcity of scientific polls available (only four polls in the past month, all of which have sample sizes smaller than 800 people); and 3) the novelty of a surging Green Party, to a level which we have never seen before in Canada.

Nevertheless, using a simplified version of the 338 electoral model adapted to P.E.I., here is the electoral projection for April 22.

The Green Party of Prince Edward Island is projected as the favourite to win the popular vote in Tuesday’s election with average support of 36.4 per cent. Should this projected support translate into actual votes on Tuesday, this would be the highest vote share for a Green party in Canadian history. 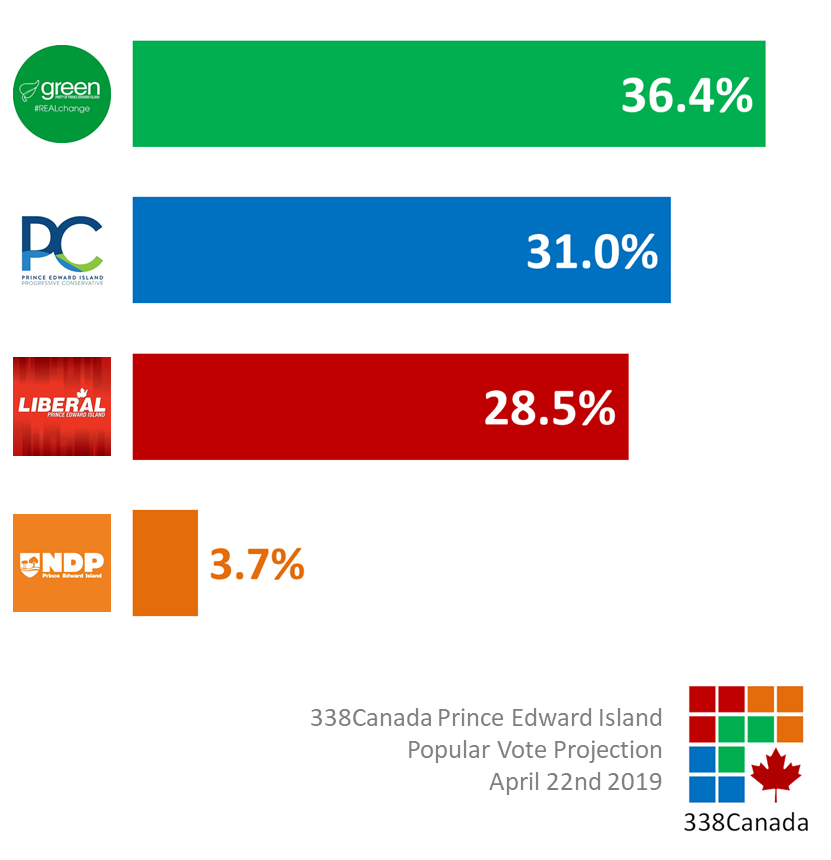 The P.E.I. Progressive Conservative Party is currently projected at an average of 31 per cent. The PCs have not won an election since 2003 in P.E.I. and, as we will see below, it could still win the most seats even by losing the popular vote.

The P.E.I. Liberal party, in power since 2007, is in danger of finishing third with average of 28.5 per cent. Many of its strongholds in Charlottetown and in the western part of the island are either leaning green or are projected as toss-ups.

The low population per district and little data available widen considerably the confidence intervals, meaning that the brackets for all three main parties overlap significantly. Even with the Greens projected in first place and the Grits in third, Liberal Premier Wade MacLauchlan could still win the most votes should polls be slightly off the mark.

With such levels of support, the Greens are projected to win an average of 15.7 seats, just above the threshold of 14 seats for a majority. See the seat projection probability density below:

We notice that the curve is wide and asymmetrical, meaning the Greens could win as many as 19 or 20 seats, or come short of the majority mark. With these numbers, the Greens win the most seats in a little over 85 per cent of all simulations (or about 5 of every 6 simulations).

The PC seat projection is also wide, and thus uncertain, with an average of 6.7 seats per simulation. While the PCs win the most seats in about 10 per cent of simulations, the odds of a PC majority are slim. For this scenario to unfold, the Green vote would have to prove highly inefficient and the PCs would have to win every close race on the Island.

Finally, the Liberals are projected at 4.6 seats, well below their 2015 result of 18 seats. If the data is accurate, it doesn’t look as though the Liberals will win the most seats (odds of about 1 per cent), although the odds of a minority government remain substantial. And as we saw in New Brunswick last fall, every seat won can matter when the time comes to win the confidence of the legislature.

Even though the uncertainty remains high, we can project the Greens as the favourites to win the most seats in Charlottetown and in the districts at the centre of P.E.I. using past election results and the latest polls. The Conservatives should hold on to their seats on the eastern half of the island. The Liberals are projected ahead in the western districts. 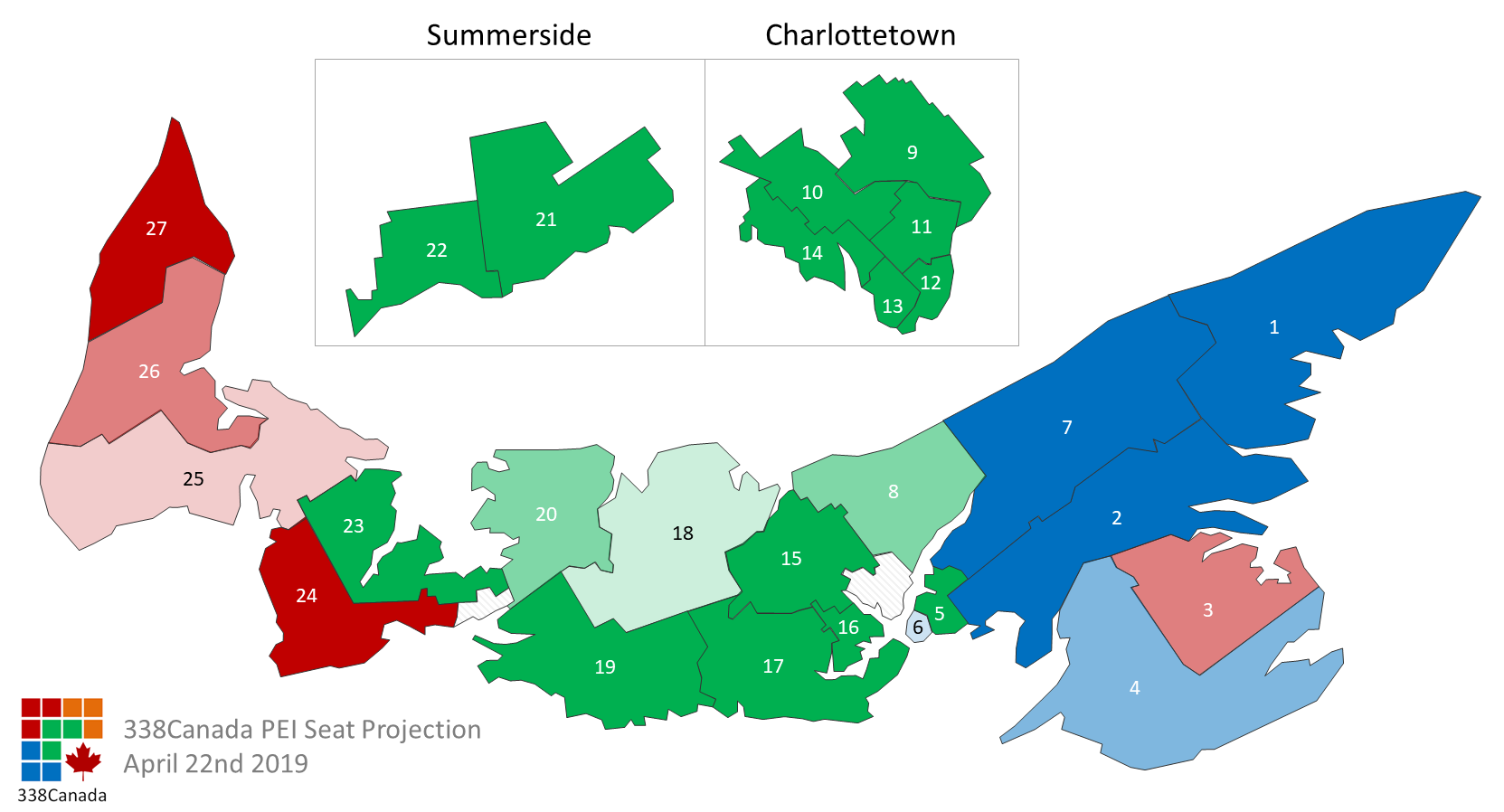 (In the figure above, districts of regular colours are projected as “likely.” Paler districts are “leaning” or “toss-ups.”)

Unlike the latest general elections in Alberta and Ontario, where poll after poll showed a clear frontrunner leading up to election day, the upcoming P.E.I. election is not set in stone. The Greens are projected as the favourite, but their lead in the polls has not been overwhelming. Moreover, whether the Greens have the “get out the vote” machine to compete against traditional parties is still up in the air.

As was mentioned in the final Alberta projection last week, polls do not vote. High support in polls is only theoretical support. To win a seat in the Legislative Assembly, every candidate needs thousands of cross marks next to his/her name in ballot boxes, and not good ratings in telephone interviews.

Sadly, we should note that a terrible tragedy struck P.E.I. politics this weekend, as Green candidate Josh Underhay and his son died in a canoeing accident last Friday (Underhay was running in the ninth district, Charlottetown-Hillsborough Park). As per election law, the election in Charlottetown-Hillsborough Park will be postponed to a later date.