Opinion: The Ontario election has become abuzz about how booze is sold. So why is every party leader ignoring the plan that wine and beer producers actually want? 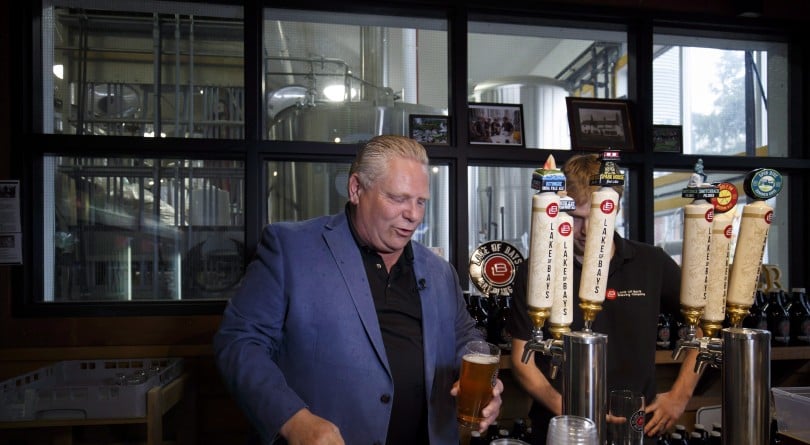 Doug Ford’s opponents frequently chide Ontario’s Progressive Conservative leader for running a campaign filled with vague promises. His platform is ill-formed and without costing, they say. But it’s become clear that the party’s proposals are tailored not just to a demographic but an individual person.

Sadly for Ford, Mr. Peterson is not registered to vote in Ontario, owing to his status as a fictional character on the sitcom Cheers. But if there is someone who would truly love the Conservatives’ single-minded focus on booze reform, it’s a barfly who considered weighty issues with one question: “Is this going to raise the price of beer?”

Ontario is a province of Norm Petersons, if one believes the PC campaign. An explanation-free commitment of “More Access to Wine and Beer” dominates the platform section of their website. They made two separate suds-specific promises—expanding distribution to convenience stores and bringing back “buck-a-beer” pricing—within an eight-day period. The party isn’t focused so much on voters’ pocketbooks as their bar fridges. So it’s disappointing their plans are unlikely to change anything. Meanwhile, all three major parties have ignored a straightforward idea that would bolster the provincial economy while improving life for long-suffering drinkers. The answer, say beer and wine producers, isn’t new distribution points—it’s making better use of the ones we have.

Ford dropped his first proposal—sale of beer and wine through corner stores—at the start of the Victoria Day long weekend. It’s a notion with history against it. David Peterson, the Liberal premier, first promised the idea in 1985 but couldn’t get it passed by his minority government. A decade later, Mike Harris, a Conservative, promised to study expansion. Kathleen Wynne, the current Liberal leader, rejected the notion, choosing instead to expand beer sales to 450 grocery stores. Wynne now describes Ford’s plan as “reckless,” while NDP leader Andrea Horwath said she’s already “not happy my cheese department sells beer.” But the strongest argument against this expansion isn’t social responsibility; Quebec, Newfoundland and wide swaths of the United States sell beer and wine at convenience stores without suffering societal collapse. The real issue is the mammoth bureaucracy that would be required for regulation. It took the Wynne government nearly three years to expand into fewer than 300 grocery stores. The sheer logistics of extending the regulatory regime into 7,500 convenience stores would take decades with a cost left uncalculated by the Ford team.

Meanwhile, Ford’s promise to reduce the minimum sale price for beer to a dollar is doomed by economics. The Liberal government hiked the threshold in 2008 at the urging of beer companies themselves. As beer writer Jordan St. John recently noted: “All of the inputs for making that beer have gone up over the past decade. Any profit the large brewers would be able to realize would be vanishingly small if even extant.” Simply put, just because Ford would allow cheaper beer to be sold doesn’t mean anyone would actually produce it.

MORE: Beer, wine and pot next to candy bars: Does Kathleen Wynne know how great that sounds?

Both of the Conservatives’ proposals would also disproportionately benefit multi-national producers over Ontario’s burgeoning industry of brewers and wineries. Companies like Molson-Coors and Anheuser-Busch InBev (which owns Labatt) are better positioned to produce cheap beer at high volume, compared with local brewers who tend to distinguish themselves with higher-quality, higher-priced product. Similarly, selling beer through a convenience store bodes better for the makers of Bud Light than a local IPA (just as many of us turn to a corner store for potato chips but few would shop there for, say, a charcuterie platter).

All is not hopeless for Ontario drinkers. Three years ago, the Ontario Craft Brewers (OCB), a trade group, suggested a simple change to alcohol regulations that would revolutionize their industry. There are more than 250* physical craft breweries operating in the province along with more than 150 wineries. Both industries are growing at an exponential pace, with sales of Ontario craft beer growing by 54 per cent between 2015 and 2017 alone—in spite of a severely throttled distribution system. Products can be sold through the government-controlled LCBO or the Beer Store, which is now owned by Molson-Coors, AB InBev and Sapporo. There are also a limited number of privately owned wine shops. But generally, Ontario-made products must fight for—and pay for—shelf space at one of the increasingly stuffed behemoths.

Brewers and vintners are allowed to operate stores attached to their production facilities, but they can only sell their own products. So the OCB suggested changing that rule to allow for “cross selling”—the allowing of craft brewers to stock other producers’ products. Taken a step further, breweries and wineries could be allowed to operate independent stores not attached to their production facilities. Suddenly, the province would have an outlet for producers that wasn’t controlled by large competitors or government bureaucracy. New companies too small to garner space in the LCBO would have the option of striking a deal with one or two similarly sized producers. For consumers, it would mean increased choice, both in terms of where to shop and what’s available to them. It would also likely mean relief from the draconian hours of the existing players; anybody who’s ever tried to buy beer on a Sunday after 6 p.m. or on a holiday Monday knows that craft breweries are now often open when the LCBO is not. Further, the plan largely thwarts concerns about social responsibility raised by Horwath—these companies, after all, are already selling alcohol. All that would change is the variety available on their shelves.

When craft brewers first proposed the idea in 2015, Wynne said she was “not closing the door” on the idea. But the proposal was quickly shelved in favour of selling through grocery stores. For local firms, this has been a welcome improvement, with Ontario products now representing 20 per cent of the beer* sold through that channel. But producers also complain they’ve traded one domineering partner for another, with big grocery chains being just as frustrating as their previous options. The current Liberal platform only contains a commitment to “work with wine, cider, spirits and beer producers to develop a new strategy to grow the beverage alcohol sector.” But creating a way for Ontario’s breweries and wineries to expand on their own is just the kind of sticking-up-for-the-little-guy promise that Ford seems to relish. And while the NDP platform says nothing on the subject, it would also be what Horwath has touted on the campaign trail: change for the better.

James Cowan is the managing editor (special projects) at Maclean’s. He also writes Beer Money, a newsletter on craft beer and business strategy.

* Clarification: This story has been updated with current statistics on the number of breweries and grocery sales throughout the province.