After flip-flopping, Ottawa says truckers need to get vaccinated

Politics Insider for Jan. 14: Francois Legault says he will table Quebec's unvaxxed tax in February; Erin O'Toole speaks out against the tax; and Harper asks Tories to bail out Peter MacKay 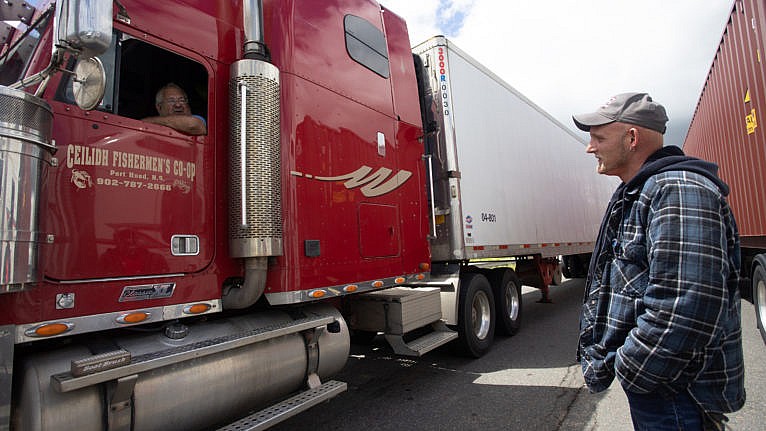 Truckers stuck at the border due to a demonstration over COVID-19 travel restrictions on highway 104 in Nova Scotia, June 23, 2021. (Riley Smith/The Canadian Press)

Truckers need jabs: Ottawa reversed itself twice in 24 hours on the question of whether truckers crossing into Canada will need to be vaccinated, Global reports. Drivers will need to be jabbed, which contradicts a statement yesterday from the Canada Border Services Agency. The industry had been seeking an extension because 10 to 15 per cent of drivers are unvaccinated, which means thousands of truckers would be off the job, jeopardizing supply chains.

The situation only became hazier on Wednesday evening, when a CBSA spokesperson told media in a statement that Canadian truckers would be exempt from the vaccination requirements to return to the country.

Instead, almost 24 hours later, the government reversed itself, standing by the mandate. Industry groups in Canada and the United States warn that mandates imposed by the two governments will cause trouble in already stressed supply chains.

Proceeding: Francois Legault said Thursday that he will table a bill in February to tax the unvaccinated, CTV reports. He did not reveal more details, but emphasized that he sees it as necessary: “What we’re saying is those people who choose to not get vaccinated, well, there will be a price to pay … because there is an impact on society as a whole, there’s an impact on the costs of our healthcare network.”

On the other hand: Bioethicists do not think Legault is doing the right thing, reports Patria Treble in Maclean’s.

“In Canada, people are allowed to make any kind of medical decision they choose, as long as it’s informed,” says U of T’s [Kerry] Bowman. “The line we are crossing is, ‘We don’t like the decisions you’re making.’” To him, such fees are essentially punitive, putting pressure on people to do something that curtails basic human autonomy: “It’s an ethical horror show that will do tremendous damage to our society.”

Trouble brewing: For the first time the popularity of Legault and his CAQ party is slipping in Quebec. 338Canada’s Philippe J. Fournier, writing in Maclean’s, looks at the surprising results of a new Mainstreet Research poll (conducted before the announcement of the unvax tax). “According to Mainstreet, if an election had been held this week in Quebec, the CAQ would have received 38 per cent of support, a drop of 10 points since Mainstreet’s previous Quebec poll last winter.”

O’Toole against: Erin O’Toole said Thursday that he opposes Quebec’s plan “to tax and target” those who are unvaccinated against COVID-19: “Vaccinated people get frustrated with what they perceive as a small group of people holding back the country,” but he thinks it’s a bad idea to tax them.

Unregimental: Three Canadian regiments have been left without a patron after the Queen stripped Prince Andrew of his military titles on Thursday, CP reports. Andrew was honorary colonel-in-chief of: the Royal Highland Fusiliers of Canada, the Princess Louise Fusiliers,  and the Queen’s York Rangers. On Wednesday, a U.S. judge refused to dismiss a civil case against Prince Andrew by Virginia Giuffre, who sued him in August, saying she was coerced into sexual encounters with him when she was 17.
Harper helps MacKay: Stephen Harper has written to Tories seeking money for Peter MacKay’s debt from the 2020 CPC leadership race, the Star reports. MacKay still owes about $500,000: “I understand that times are tight, but I do not want to see Peter and his family’s future weighed down by debt incurred in the service of our country and our Conservative party.”

Vax grievance: The RCMP’s union said Thursday that it is representing  Mounties who are fighting the federal government’s vaccine mandate, CBC reports. President Brian Sauvé says the union is supporting members but not against mandates:  “We’re neither here nor there on vaccine mandates. We don’t support it. We’re not against it.” Treasury Board statistics say more than 97 per cent of federal public servants are fully vaccinated.

Auto skirmish: Canada is joining Mexico’s official complaint alleging the U.S. is violating the new NAFTA on auto parts, CBC reports. Canada argues the Biden administration’s view of the rules is “inconsistent” with the trade deal the three countries agreed to in 2019. The dispute centres on how the three countries define a North American vehicle.

Cottage repairs: Justin Trudeau and family are not living at the decrepit official residence at 24 Sussex, but the government has spent millions for work on Rideau Cottage, where they live, the Star reports.

Now, papers obtained under access-to-information legislation show the details of the work, ranging from the roof (all new) to the pavement (equally new) and everything in between. There was $16,000 for painting; a $4,200 JennAir range; piano tuning at $780 a pop; and $3,000 for dusting those high, hard-to-reach places. Then: $305,000 in paving and landscaping; $189,000 for a roof; and $343,000 in heritage interior renovations. (Figures rounded to the nearest thousand.)

Whose problem? Campbell Clark, in the Globe, has a useful column explaining that although premiers like to blame Ottawa for funding shortfalls, it’s really up to them.

Only provinces can answer the kinds of questions they face in a pandemic: Why are hospitals in Quebec, a province of nine million, in crisis when there are 2,500 patients with COVID in hospitals, only half of whom are being treating primarily for the virus? Why does Canada’s richest province, Alberta, have so many fewer ICU beds than one of the poorest U.S. states, Alabama? The real questions will always be about provincial choices. There’s a need for accountability.

That doesn’t take Trudeau off the hook, because he did promise to spend more, Clark writes, because lines of accountability are blurred in Canadian politics on this question.
Already taken: The People’s Party of Canada has been blocked from registering its name for a provincial party in Ontario by a Toronto man who has been running “Peoples Political Party” since 2011, the Star reports. Kevin Clarke has fielded as many as six candidates in a provincial election campaign, but none have even one per cent of the vote.
— Stephen Maher
FILED UNDER: COVID-19 Editor's Picks Legault Ottawa Politics Insider Vaccines