Jason Markusoff: With Kenney holding a commanding lead, Notley's NDP is plotting a bare-knuckle campaign. No one's coming out on top. 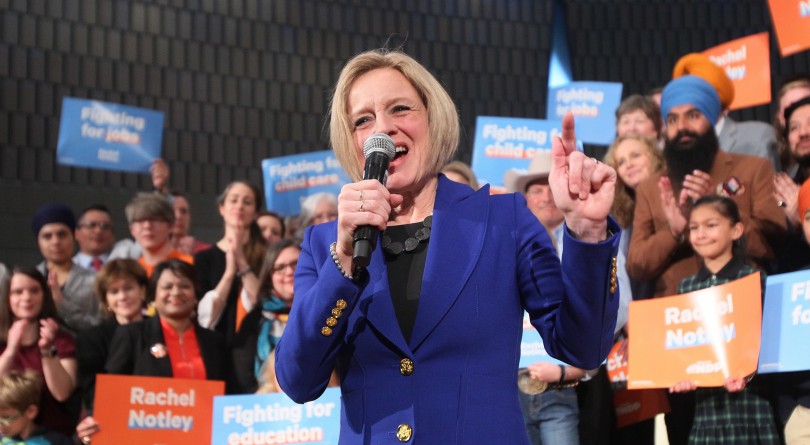 “Let me just say this: I personally do not believe that Jason Kenney is racist,” NDP Leader Rachel Notley told reporters on the morning she launched Alberta’s election campaign. The premier did not feel the need to also state that as far as she understands, Jason Kenney does not hate children like the ones who stood awkwardly but patiently behind her during this campaign kickoff.

Here’s how she did continue that thought: “But I do believe the UCP, as a party, has a problem with racism.”

It’s going to be that kind of bare-knuckle campaign, Alberta’s NDP have concluded, if they want a serious shot at survival.

Well behind in the polls—as they have been almost since the dawn of their first-ever term ruling Alberta—the New Democrats want to keep voters focused on something other than the province’s tepid economy and resurgent unemployment, which the election had long seemed destined to be fought over. The NDP’s preferred ballot question is: Sheesh, do you guys really want Alberta to be governed by a gang teeming with extremists, rogues and racists and led by a conniving, duplicitous neanderthal?

Notley got some timely bits of help in the days leading up to the election call as she tries to frame the political battle to best suit her. With fresh evidence that Kenney and organizers plotted to run a dubious “kamikaze” candidate in the United Conservative leadership race in order to bash his key rival, Notley has a quite credible excuse to call her opponent a cheater who lied when caught at it. (Even if rules allow such trickery, surely it tramples upon every principle of fair play and democracy to so brazenly do this.)

And on the eve of the election call, the NDP-aligned, journalism-inspired outfit PressProgress leaked private messages from UCP candidate Caylan Ford that conveyed unnerving amounts of sympathy for white-supremacist causes, forcing her to resign in a competitive riding. That follows other past stories of such unseemly and hateful connections for UCP candidates or hangers-on, many initially promoted by the NDP.

READ MORE: What a ‘kamikaze’ mission reveals about Jason Kenney

And there’s still four weeks to go, election watchers say as sweat beads on their foreheads.

The left will bring out more damage-attempting revelations against Kenney and his cadre, and it seems so will disgruntled conservatives on the sidelines of his United Conservatives—they were the primary sources, after all, who revealed the sham-candidate scandal, and leaked Ford’s private Facebook musings.

After years of steadily trying to chip away at Kenney’s credibility with such attacks, his UCP comfortably lead the NDP in two polls conducted this month: 18 points province-wide according to Ipsos/Global, and 12 points according to Leger—and both polls show that no NDP seats are safe anywhere but Edmonton, the party’s traditional base.

Kenney’s own popularity polls behind that of his party, and Notley is more well-liked than the NDP—so much so that candidate signs prominently say “Rachel Notley’s team” and leave the party logo tiny and tucked into the corner. This fuels New Democrat strategists’ belief that dragging down Kenney is the best way to weaken his party, but the orange side’s own brand liability remains far more dire than any of the other key entities at play in the Alberta election.

Those Ipsos and Leger surveys, and others before them, depict an Alberta populace uniformly obsessed with jobs, the economy and pipelines. And lo, what three words were in block letters on a placard at Jason Kenney’s lectern the day before the election? JOBS ECONOMY PIPELINES. And they were represented in corporeal form at Kenney’s first campaign event Tuesday: workers in coveralls at the site of an oilfield services company that’s shuttered rigs and office branches in the last few years.

Former Saskatchewan premier Brad Wall had a habit of rhyming off good-news economic indicators to start his speeches, like an economic development agency booster. Kenney plays the inverse role: reminding Albertans their average take-home wages are down $6,400 since 2015 and more than 180,000 residents are unemployed. He blames NDP tax increases and regulations much more than any economist would, and then promises a dramatic corporate tax cut and regulation shredding to bring back Alberta’s competitive edge.

Unlike his erstwhile ally Doug Ford, he’s not promising “open for business” highway signs; Kenney’s nameplate in the premier’s office will suffice. “Simply the election of a United Conservative government will itself send a signal to job creators they can invest in this province again.”

It was long obvious to Kenney (and the rest of us) that NDP personal attacks would aim straight at him, just as plain as it was to Notley that her rival would premise nearly all his campaign on grumpiness about Alberta’s carbon tax and oil-sector slump. His side is confident that the sham candidate controversy is too complex for people to understand and at day’s end nothing illegal occurred. (Sound awkwardly like how the Liberals feel about l’affaire SNC-Lavalin?). The UCP is also betting that Albertans will ultimately be more repelled by the NDP’s “fear and smear” campaign than they will be by anything that barrage reveals.

In 2012, Alberta’s Progressive Conservatives escaped near-certain electoral demise when the opposition Wildrose Party was revealed to have a leader who doubted climate change science and a candidate who believed gays should burn in a “lake of fire.” But back then, Alberta was enjoying yet another year of solid, nation-leading economic growth—no job anxieties drove voters away from the governing party, as they do now.

It appears that Rachel Notley and the NDP are headed for a big defeat unless something substantial changes before election day. They have four weeks to do so. If Kenney wins, his opposition will have nonetheless succeeded to persuade much of Alberta their new premier is a terrible human in charge of a caucus of even worse people.