... vows to work with whoever forms government — 'no matter who is the next prime minister' 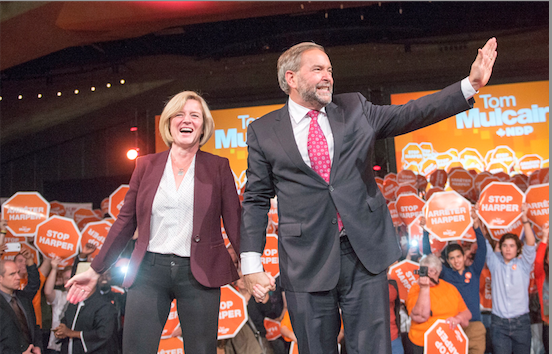 Modern Canadian political rallies are, as a rule, known for anything but their nuance. They’re the realm of carefully selected and daily-theme-conveying audience signs, dignitaries and human backdrops arranged just so, crowd chants pre-choreographed so they sound spontaneous, and speeches where the 10th minute’s statement boldly contradicts the third minute’s. (Hey, didn’t the Liberals just denounce Stephen Harper’s deficits seven minutes ago, and now Trudeau’s promising his own? Oh hey, it’s time again to stand and obscure our faces with our signs!)

But, here in Edmonton, on the NDP rally stage, came a gigantic disclaimer in the middle of Alberta Premier Rachel Notley’s tire-pumper for her federal colleague. “And you may have heard me say this before, but it bears repeating,” she began. “As premier, of course, I have an important responsibility to work with whomever forms government. No matter who is the next prime minister, I will do my job to stand up for the best interests of Albertans, and to engage collaboratively and respectfully with my counterparts from across the country. I’ve made that commitment repeatedly and I will keep that commitment.”

The applause for this began tepid, then grew. She added, to begin her introduction: “But tonight, this evening, with you, as an Albertan, as a mother, and as a proud Canadian, I want to say this: It is time to elect Tom Mulcair as our prime minister!”

The endorsement had been public since August. On the campaign’s final weekend, federal New Democrats finally got the image of Notley raising Mulcair’s arm, to align with a key campaign narrative: If it can happen in Alberta, of all places, why not across Canada? It’s that surprise provincial victory in May that rocketed the poll charts’ orange line up over blue and red throughout the summer, until its steady descent back to third place started in late August.

“They said we’d never win in Alberta, but, with Rachel Notley, you all proved them wrong,” Mulcair said. “They’re saying the same thing now. But this Monday, with your help, New Democrats will prove that Canadians are ready for change.”

Friday’s rally in Notley’s hometown was a bid to restore that spring glow, and help efforts locally, where Mulcair can pick up an extra seat or two: Edmonton–Griesbach and Edmonton Centre, though a three-way battle for the latter seat can help Conservative re-election.

But it’s awfully hard to understand the political upside in this for Notley. Come this Tuesday, she’s still premier for another three-and-a-half years, and has a difficult budget to deliver the following week. The guy whose right arm she raised is headed for a disappointing third-place election finish. Come Tuesday, he could face serious pressure to resign as leader, and perhaps even be pushed out of his seat in a Liberal wave in Montreal.

Other leaders have shared the stage with star surrogates. But Wayne Gretzky, Jean Chrétien, and former Mississauga mayor Hazel McCallion have less to lose with such close affiliation with a potentially unsuccessful candidate—even Rob or Doug Ford; what more esteem could they possibly lose? Notley, like Kathleen Wynne in Ontario, has a whole province’s recently granted support to maintain. It’s proven tricky to do so in some quarters. When Notley spoke a week earlier to 1,600 people at a Calgary Chamber of Commerce luncheon, the reception to her and her Mulcair endorsement (with disclaimer, see above) was so quiet, you could hear an icicle drop.

Maclean’s asked some federal and provincial New Democrats how this rally would politically benefit Notley. The clearest answer from one was that it wouldn’t; that she was supporting the party she personally believed in. Gratitude may also factor in, since many from the federal crew, including campaign manager Anne McGrath, worked on the provincial campaign. Other key Ottawa figures stayed in Edmonton as staff, to nurture this newborn government.

Notley has been careful not to tie herself to Mulcair as much, or as routinely, as Ontario’s Wynne has to Trudeau, but one picture could be all it takes for the memory to stick. Meanwhile, the Edmonton Journal’s Mariam Ibrahim spotted a couple of camera-brandishing Wildrose aides at the NDP rally, doubtless giddy at the prospect of tying Notley’s government to anything sounding remotely anti-oilpatch that has, or will, come from the mouths of federal politicians. Albertans are likely to see photographs from Friday in opposition attacks for months or years to come, their shelf life perhaps long outlasting Mulcair’s.

He was carefully scripted in Edmonton. When time came to attack former Liberal campaign co-chair Dan Gagnier, Mulcair referred to his email “advising a major corporation.” All week, in provinces that don’t rely on bitumen’s flow, Mulcair pointed out the Liberal insider was abetting the TransCanada pipeline company, for the Energy East pipeline. He was showing sensitivity to the province and the Notley government’s golden goose, and how much Albertans would like Energy East to get simple passage—just as he’s aware it can help elsewhere in Canada to tie the Liberals to oil and pipelines.

Mulcair reiterated his arithmetical closing argument in Edmonton: that his party needs only 35 extra riding wins to knock out Harper; that his party, in 2011, won far more seats than the Liberals. Had Albertans followed that sort of advice in May, how could they have possibly catapulted into power a party entering the election with four of 87 legislature seats?

There were a handful of “Notley Crew” T-shirts at the federal rally on Friday, and a couple times in the premier’s speech, she had to pause mid-sentence to let the applause die down. But May’s orange wave is not October’s: A Mainstreet Research poll taken earlier this month suggested that only 28 per cent of Alberta NDP supporters will back the federal party, while 33 per cent will go Liberal and 17 per cent will go Conservative. Several polls put Mulcair in distant third place provincially.

Both Notley and Mulcair made a bold-sounding forecast. “Albertans are going to send more New Democrats to Ottawa than ever before!” It’s actually a modest feat. Electing two MPs in the province would do the trick.