Andrea Horwath and the Ontario New Democratic Party failed to overcome Doug Ford and the Progressive Conservatives’ momentum in the 2018 Ontario Election, but more than doubled their seat count to become the province’s official opposition. Horwath addressed supporters at the party’s election-night headquarters in Hamilton, Ontario a short while ago. Here’s what she said:

My friends, from the very start of this campaign, people wanted change. And I could not be more proud that we offered a positive vision.

Change for the better!

New Democrats rejected the politics of fear and cynicism. We rejected that! And we put hope and a vision for a better future at at the heart of our campaign. And Ontarians have responded like never before.

Today, millions of people voted for change for the better. We have won more seats than we have held in a generation!

And I am deeply humbled that Ontarians have asked us to serve as the new Official Opposition!

New voices, new ideas, and a strong team of New Democrats working for you, the people of Ontario!

You know, I’ve spoken with Premier-designate Ford and I did congratulate him on his achievement. And I’ve told the Premier-designate that New Democrats will work each and every day for the change that families need to make life better for all of us!

We will be positive and constructive in our approach, but the vast majority of Ontarians did not vote for cuts to health care, cuts to our schools, and cuts to the services that our families are counting on. People did not vote for that. And we will be the voice at Queen’s Park for all of those Ontarians.

New Democrats will always stand with families, seniors, working people, and young people to protect what matters for most of the people of Ontario.

To the candidates, campaign teams, and volunteers from every party, thank you. Thank you all for caring so deeply about the future of our province of Ontario. To the people of Hamilton, it is the privilege of my life to represent this great city. And I am deeply humbled that you have placed your faith in me yet again. I appreciate it very, very much. 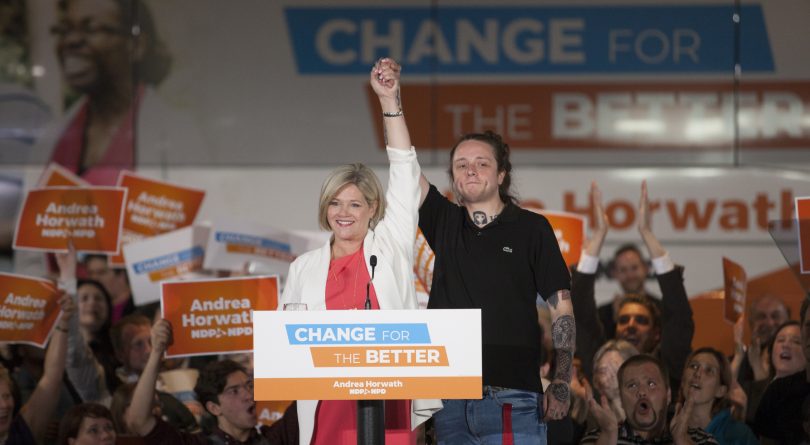 Official opposition leader Andrea Horwath speaks to her supporters after election results are released at the NDP headquarters at the Hamilton Convention Centre. (Photograph by Chloë Ellingson)

And to my family, who are all here, who are cheering us on tonight. To my family, especially my son Julian—you mean the world to me!

And to my incredible, incredible campaign team. Thank you for one of the best campaigns we have ever, ever had in our province as New Democrats.

To our volunteers, you people in this room. To our volunteers and supporters. To our partners in the labour movement, to our MPPs and all of our candidates, whether you won or lost tonight, and to our federal leader Jagmeet Singh, whose tireless work helped us to elect candidates across Ontario.

Thank you for working so hard to give people hope! Hope for a better future in our province!

You know, over the course of this campaign, I’ve met so many people. So many people who want change for the better in our lives. You know, I think of a couple of sisters that I’ve met. And those sisters are farming sisters. They farm together in Lambton County. And they have never voted for the NDP before. But they believe in dental coverage for everyone and they joined us this time.

Official opposition leader Andrea Horwath greets her supporters after election results are released at the NDP headquarters at the Hamilton Convention Centre. (Photograph by Chloë Ellingson)

I think of a young woman I met in Toronto’s west end. She heard of our plan to make housing and child care more affordable, and she joined us in this election. I think of a senior citizen I met in Bowmanville in Durham region who wanted change. And he saw our plan to give more opportunities. And he joined us.

I think of a senior citizen right here in Hamilton who has never volunteered with us before. She heard our plans to ask the richest people to pay a little bit more to make life better for everyone. And she joined us to make that happen. And, you know, I think of the incredible people that I’ve met in Kenora and Grassy Narrows. People who literally have to struggle to have to access health care and who have waited literally decades for action to clean up the mercury in the water. I invited them to join us to to make change happen for the better happen together and I want to thank everyone in Northern Ontario who has placed their trust in us.