Jason Markusoff: The overwhelming majority of voices on this issue largely dismiss this as an inconsequential kerfuffle, but 'tis the season to wail about how hypocritical every politician has become. 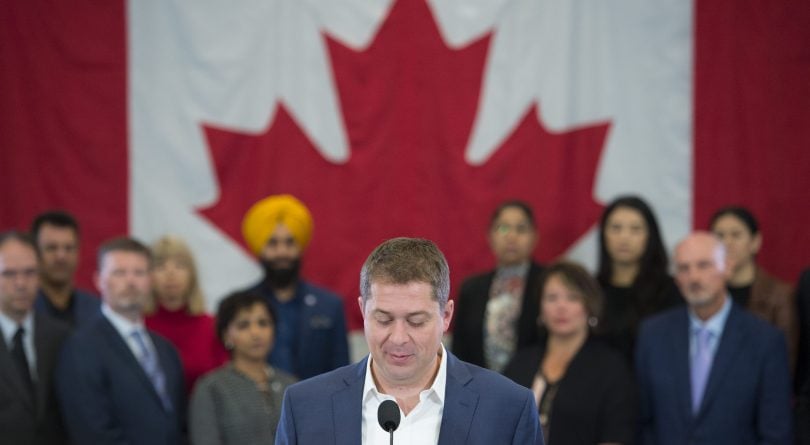 Canadian enough? Scheer at a campaign stop in Toronto on Friday (Jonathan Hayward/CP)

Boris Johnson was bidding to shed his United States citizenship back in 2015, when he was mayor of London and long before he ascended to the prime ministership of Britain. The New York-born moptop said then that he planned talk to the American ambassador, but wasn’t confident of finding any fast lane. “It is a laborious business. They don’t make it easy for you,” he said at the time.

It took more than a year for Johnson to formally shed the dual status—the final quarter of 2016, to be precise. By then, Johnson was foreign secretary, and in the wings to become PM once a few more shambolic Brexit-era dominoes fell.

The clock apparently began ticking on Andrew Scheer’s citizenship renunciation this August, shortly before the federal election call. Which means, barring some sort of special treatment, a Conservative victory would give our country its first Canadian-American head of government, and first dual citizen Prime Minister since 1984’s short-lived leader, the U.K.-born John Turner.

For Canadians, voluntarily dropping one’s U.S. citizenship generally takes about a year to complete. Dual citizens must apply for a renunciation appointment at an embassy or consulate, and the wait for those appointments tends to be around eight months, says Vancouver immigration lawyer Mark Boulanger. “That’s a period they consider a cool-off period, so somebody can think through this very serious decision they’re about to make,” he says. “Kind of like when someone gets divorced, you have to separate for a year, and then and only then will the court grant a divorce because the parties will have some time to reflect on their situation.” In the person-country breakup scenario, one must be okay with losing rights like voting, a passport and status for children—though it’s not a way to get out of taxes owing. U.S. embassy websites call renouncing “a very serious and irrevocable exercise.” (Scheer seems fine with all this, and has said he’s routinely filed U.S. tax forms with the IRS, as required of citizens.)

After that waiting period, one renounces by swearing an oath and signing a series of documents in front of a consular officer. Up to three months after a review in Washington, Boulanger says, the applicant will get their certificate of loss of nationality. Tie up loose ends with American tax authorities, and done—as simple/laborious as that. More pertinent for optics for Scheer, as time-consuming as that as well.

A VIP fast track lane? Boulanger says he isn’t aware of one. “I don’t think there is, because how do you fast track the cooling-off period,” he says. “It doesn’t really matter who you are.”

At least this is a country with solid diplomatic relations with its southern neighbour. Somalian President Mohamed Abdullahi Mohamed renounced his U.S. citizenship in August, after 2 ½ years on the job. The Somali constitution didn’t require him to do so, but Mohamed had reportedly begun a process after becoming president. It was an arduous bilateral process; the embassy in Mogadishu was closed for 28 years in the wartorn country, only reopening this week.

Ashwin Sharma, a Florida-based immigration lawyer, suspects there may be a State Department lever to pull somewhere for a high-level Canadian on the verge of leading the country. “They can easily cherry-pick a case like this if they want to have it adjudicated quicker,” says Sharma, himself a dual citizen of United States and Canada.

In Johnson’s Britain, as in Canada, there are no rules requiring top-level politicians to be citizens of only the particular country they govern. Johnson insisted he wanted to renounce for tax purposes. But they’re so often aware of those nattering murmurs and questions of divided loyalties—questions Scheer and his Conservative party have variously raised about former Governor-General Michaëlle Jean, and fellow Opposition leaders Stéphane Dion and Thomas Mulcair, all current or then-holders of French citizenship. (A funny thing about politics and grumblings about loyalty: in recent years, one of the few Official Opposition Leaders that Canada’s had with only Canadian citizenship was Michael Ignatieff, the longtime expatriate Conservatives claimed “didn’t come back to you.”)

The overwhelming majority of voices on this issue (uh, me included) largely dismiss this as an inconsequential kerfuffle, but ‘tis the season to wail about how hypocritical every politician has become. Hypocrisy is the new gotcha. The only time we ever hear a Conservative raise alarm about the massive carbon footprint of air travel is when a Liberal or celebrity happens to be causing those emissions. The Liberal leader who said last election “a Canadian is a Canadian is a Canadian” about a different dual citizenship issue could have brushed off this issue, but who can resist when there’s ripe campaign fodder there for the plucking?

[UPDATE: Maclean’s spoke with John Richardson, a Toronto lawyer specializing in U.S. expatriate issues, who agrees it’s impossible that Scheer can wriggle out of his U.S. citizenship before the election (or a subsequent swearing in as Prime Minister, if he wins), unless the embassy arranges a special appointment and speedy authorization. He believes Canada’s leader shouldn’t be a dual citizen on principle, and argues there’s a particular reason American status is more problematic. That’s because unlike other countries, United States extends its laws, tax requirements and threats of penalties to citizens living abroad. “We can’t have him living subject to sanction by another country,” Richardson says.]

Had Scheer requested to shed his second citizenship two years ago when becoming Conservative leader, we wouldn’t be on the potential—and largely inconsequential (but boy, will it get the folks talking)—verge of electing a part-American as Prime Minister.

RELATED: Why Trudeau and Scheer are out-promising each other on affordability