Andrew Scheer glowers at the Man Who Wasn't There

It should be easy to look prime ministerial when the Prime Minister isn't at the debate. But Scheer couldn't quite pull it off. 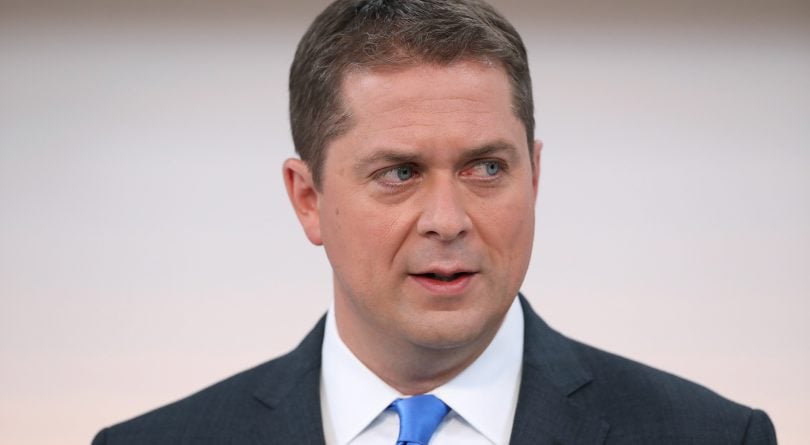 More than two years after Andrew Scheer became leader of Canada’s Official Opposition, polling suggests nearly one-third of Canadians still don’t know the man—or at least, don’t know enough to get a measure of him. This campaign serves as a pivotal, 40-day introduction to the Conservative leader for Canadians unsure whether he should be the next Prime Minster, and the Maclean’s/Citytv debate was his chance to make that crucial first impression.

Scheer did some work to dispel the snarky dismissal the Liberals have long cast upon him: that he’s just Stephen Harper with a dimpled smile. Throughout this debate, Scheer seemed at pains to avoid smiling. He waited his turns to speak with eyebrows alternating between arched and furrowed, and a studious earnestness that kept the edges of his lips from curving upward yet did not forestall the occasional glower.

After all, he felt a great disappointment which voters must know he could not hide: at Justin Trudeau for not showing up to the debate; at Trudeau for violating ethics rules, for taxing carbon, for dressing like a fool in India. Scheer’s quarrel is not with NDP Leader Jagmeet Singh or Green Leader Elizabeth May—in fact, his hopes for a Conservative majority rest on the two left-leaning parties carving heavily into the Liberal vote share. So he came in with a mission to turn his sights toward the man who wasn’t there. He’d pause with relish when deploying the seemingly scripted refrain: “something Justin Trudeau… FAILED to do.”

Trudeau’s absence was something Scheer tried to exploit, but the effect of the incumbent punching bag being a couple of time zones away was to turn the Tory leader into the substitute punching bag for the evening. One might have expected Singh and May to focus on one another, since they’re duelling for votes like never before. One would be wrong. The Green and NDP leaders both wanted to show their bases how great they were at battering conservatives—painting Scheer as a Trump puppet and an anti-immigrant demagogue while accusing him (without much evidence) of wanting to slash taxes for the rich. Conservative wisdom coming into the debate held that their leader shouldn’t bother mixing it up with the two rivals competing for third place. But Scheer didn’t hesitate in many cases to shoot back, leaning in on occasion to debunk remarks that weren’t even about him.

He lacked a retort when Singh said he was “appalled” that Scheer wouldn’t commit to not appealing the recent court ruling on compensation for First Nations harmed by the child-welfare system. Or when May and Singh both poked him on his failure to rebuke Donald Trump for cruel policies like separating immigrant children from their families.

Fact is, however, that if Trudeau had been there, Scheer wouldn’t have been the only one falling into awkward silence when invited to whack the U.S. president. The current Prime Minister and his wannabe successor are both acutely aware of the delicate trading relationship they must maintain with Trump, and of the president’s hair-trigger temper.

Moreover, when the Liberal leader joins Scheer on stage, the Conservative won’t be the odd one out in supporting pipelines. (Trudeau’s presence could even help Scheer from a visual perspective; he looked freakishly tall on Thursday compared to his opponents; while the 6-4 Scheer towers over Singh and May, he’s only two inches taller than the Liberal leader.)

READ MORE: Election 2019 primer: Jobs, the economy and the deficit

Clearly, Scheer wanted to look prime ministerial, and the constant jabs from the lecterns on either side of him helped on that score, creating the impression that he is the frontrunner the others are desperate to take down. But Scheer didn’t project resolute confidence, or optimism about his vision. At times, the camera angles showed his right leg shifting or shaking—restless energy he could have better channeled by speaking with firmness.

He’ll be roundly criticized for complaining that Parliament’s embrace of the United Nations Declaration on the Rights of Indigenous Peoples would “hold hostage” major development projects, but it’s worth noting that he stressed it would do so to the detriment of large projects that “employ so many Indigenous Canadians.” He spoke about progress on on-reserve boil-water advisories, infrastructure and staffing capacity on First Nations, and generally about Indigenous relations in ways that would have outshone Stephen Harper of 2015. There was almost a tone of frustration from Scheer on how the Liberal leader has shifted the goalposts on that file: “If there’s one area where Justin Trudeau raised expectation to levels that he has been a complete disappointment on, it is on Indigenous files.”

Scheer’s people may consider this Trudeau-less debate a rehearsal for the ones the Liberal leader plans to show up for. Next time, he’ll face more relentless comparisons to Ontario Premier Doug Ford—he strained to dodge them Thursday—while fact-checkers will go to town, rendering inoperable his dubious claims about asylum seekers gumming up the refugee “queue” and no serious person believing that carbon taxes work.

It’s fairly easy to look like the most prime ministerial debater when the actual PM doesn’t show. This debate signals Scheer could use a few more sparring rounds before his main opponent gets into the ring.