Andrew Scheer’s resignation speech in the House of Commons

"I’ve made this decision because it’s the best thing for our party. Our party needs someone who can give everything they’ve got." 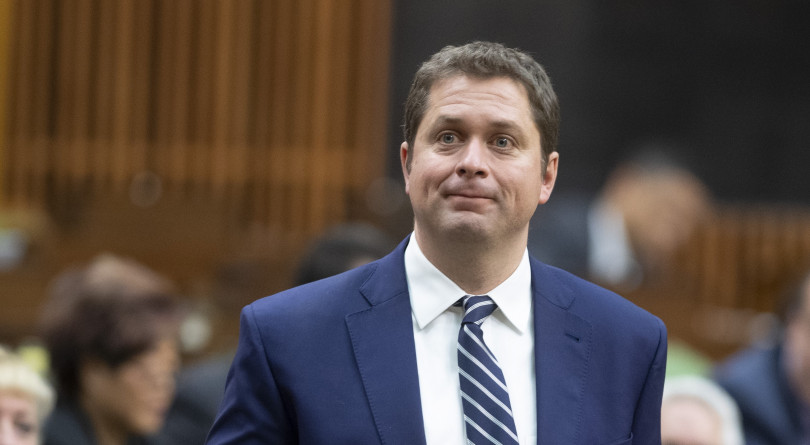 Leader of the Opposition Andrew Scheer rises to announce he will step down as leader of the Conservatives, Thursday December 12, 2019 in the House of Commons in Ottawa. (Adrian Wyld/CP)

Mr. Speaker, I was elected to this House in 2004 at the ripe old age of 25. In many ways I grew up in this chamber. Some may say I haven’t yet grown up. I was barely out of university. Newly married with our first child on the way. Since then I’ve had five beautiful children and my first born is now 14—he’s all arms and legs and I think he’s going to be taller than me very soon, Mr. Speaker.

I’ve logged many hours flying back and forth from Regina and Ottawa and all across this wonderful country. And along side my friends in the Conservative caucus we’ve accomplished a lot on both the government and opposition side of the benches. And most importantly we’ve kept our party united and strong. Which is why today I felt it was appropriate to speak to any friends and colleagues in the House of Commons about one of the most difficult decisions I have ever made. I just informed my colleagues in the Conservative caucus that I will be resigning as the leader of the Conservative party of Canada. And I will be asking the Conservative Party National Council to immediately begin the process of organizing a leadership election.
As our party embarks on this exciting opportunity of electing a new Conservative leader and Canada’s next prime minister I intend to stay on as leader of the party and the official opposition. Serving as leader of the party that I love so much has been the opportunity and challenge of a lifetime.

READ: Andrew Scheer is stepping down as Conservative Party leader

This was not a decision I came to lightly. This was a decision I came to after many long, hard conversations with friends and family over the past two months since the election campaign. This has been an incredible challenge for our family to keep up with the pace that is required to lead a caucus and a party into a general election. My wife Jill has been absolutely heroic. But in order to chart the course ahead, this party, this movement needs someone who can give 100 per cent to the efforts. And after some conversations with my kids, my loved ones, I felt it was time to put my family first.

The party that we have all built together is far too important for one individual. Our party is not a cult of personality. It’s not shaped by whoever’s name is on the masthead, but by the hundreds of thousands of Conservatives who pound in lawn signs, sit on their riding associations and donate a few dollars every month.

And as our party beings to embark on this exciting opportunity, electing a new leader, my only ask to my fellow Conservatives is this: let’s stay united. Let’s stay focused on our one shared goal and our one shared priority, to deliver a strong Conservative government who can unite our country and make life better for all Canadians. For the oil worker out of a job, for the senior choosing between heating and eating and for Canada’s position on the world stage.

I believe in this party, I believe in our movement, I believe that we will be a government after the next election. I got involved as a teen because I love this party. I ran because I love this party and I ran for leader because I wanted to help this party. I will continue to serve my Conservative caucus. I will continue to serve the great people in the fantastic riding of Regina-Qu’Appelle. I’m proud of what we’ve accomplished in my time as leader. We knocked the Liberals down to a minority, we increased seats all over this country.

Whoever the hundreds of thousands of Conservatives across the country choose to lead our party into the next election, that person will have my 100 per cent support. And my message to the Prime Minister and the Liberals in the House is this: during this leadership election there will be no free rides in the House of Commons. We’ve already hit the ground running. We had a 1000 per cent batting average for a brief period of time on Tuesday evening, we might see if we can increase that batting average. But we are going to continue to be here every single day. To represent our constituents, perform our duties as parliamentarians to put Canadians and Canada first. I want to thank you Mr. Speaker for indulging me in this statement. I want to thank my colleagues in the Conservative Party.

I’ve made this decision because it’s the best thing for our party. Our party needs someone who can give everything they’ve got. I’ve always been honest with my colleagues, I’ve always been honest with everybody. I know that the road ahead, the stress that would put on my family. I can’t give them that 100 per cent assurance. I know the next person will and I know I can speak on behalf of my team that the next leader of this party will have support required from these benches to make sure we’re successful in the next election.