Andrew Weaver on why he's stepping down as B.C. Green leader

A transcript of remarks, in which Weaver invited 'another generation take the lead' 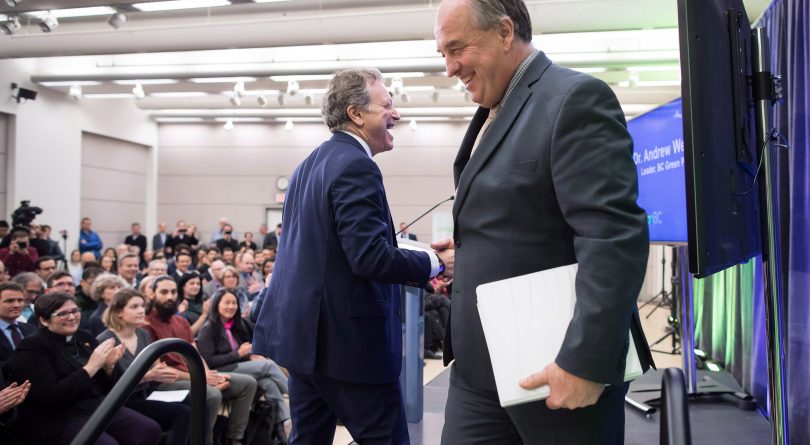 On Monday, Andrew Weaver announced at a press conference that he planned to step down as leader of the B.C. Greens and that he will not run for re-election in his riding of Oak Bay-Gordon Head.

The decision reverberated through B.C. and national politics, as Weaver and his two Green caucus-mates are linchpins of the current governing arrangement in B.C., propping up Premier John Horgan’s NDP minority under a confidence and supply agreement. That arrangement won’t change, stressed Weaver, a climate scientist, as the Greens elect a new leader to take them into an expected election. He also said he won’t leave his seat before the end of the current mandate.

But Weaver recently suffered a health scare he has acknowledged profoundly affected him. He began his address with a quotation from the former U.S. president Theodore Roosevelt. Here’s a transcript:

“The credit belongs to the man who is actually in the arena, whose face is marred by sweat and dust and blood.”

I would echo that sentiment in my climate-and-society courses at the University of Victoria when my students came to me distraught about the consequences of global warming. “Vote for representatives who are willing to do the hard work to address climate change, and support their policies,” I would tell them. “Or if they’re not on the ballot, consider running yourself.”

Watching with dismay as our province slipped from being a climate leader to a climate laggard, I eventually and reluctantly realized I needed to follow my own advice. It’s long been my belief that those who seek public office should do so out of a sense of civic duty rather than choose it as a lifelong career, and you and I both know many examples of that.

In stepping aside from science and academia to enter the political arena in 2013, I hoped to correct our emissions trajectory and hoped that doing so would benefit the economy at the same time. The foundation of this minority government is climate action, best represented by our collective work on CleanBC. That is our economic plan to build a thriving, climate-responsible and climate-resilient community.

I’ve long said it is time we reimagined the climate crisis as not solely an environmental issue, but as an incredible opportunity for innovation, creativity and the advancement of our society. While there is still a long to go with CleanBC, it offers us the best starting place we’ve ever had.

And I want to thank Minister [of Environment George] Heyman and Premier Horgan for their earnest co-operation and collaboration in helping put that roadmap back in place.

I’ve taken significant time this summer to reflect with my family on the reasons why I sought elected office, as well as why I sought leadership of the B.C. Greens in the first place. It is with all of this mind that I announce that I will not be seeking another term as MLA for Oak Bay-Gordon Head, and have asked the chair of the provincial [Green Party] council to start the process of electing a new leader for the B.C. Greens in preparation for the 2021 provincial election.

This is not an easy decision for me. There’s a long way to go. At the same time, I feel a deep responsibility and pride for the role the B.C. Green played in getting the province back on track to meet its climate commitments and to reframe climate change as an economic opportunity instead of purely an environmental issue.

Millions of people, including many thousands on the lawn of the legislature and 100,000 in Vancouver two Fridays ago, are demanding politicians start acting to reduce greenhouse gas emissions. This incredible movement is being led by youth, the ones that must live with the consequences of the decisions that we make. And their momentum is growing. This is also one of the main, if not the main, reasons why I believe it is time for the B.C. Greens to elect a new leader.

It’s time to let another generation take the lead. I’ve given everything I have to this work. Soon it will be time for me to step aside and allow a new leader to take what I have accomplished and make it better. Take it further. And adapt it to the opportunities and challenges that the future will bring. I intend to remain as the leader of the B.C. Greens until a new leader is elected, which I expect will occur in the early summer of next year, sometime after the spring legislative session.

In the months ahead, I will continue to work on a number of key climate policies, including an ambitious Climate Accountability Act, and doing everything I can to ensure that CleanBC is fully implemented. I’ll continue to push the government to prioritize the policies that will allow us to reach out 2030 greenhouse gas reduction target. And I will continue to work with my colleagues in the B.C. NDP to accomplish what was set out in our confidence and supply agreement.

Nothing that I am announcing today changes my commitment to work within this agreement, and to see the delivery of our shared agenda. Stability of this government moving forward is my primary objective.

For the party and for anyone who may seek leadership of this party, this is an incredible opportunity. B.C. Greens have never been as organized, nor seen such widespread support as they do today. Looking more broadly, we can all witness the rise of Green parties across the world, and certainly here in Canada. No point in history has ever had so many Greens elected in our country, and all signs point to even more being elected after the next federal election.

The B.C. Greens have demonstrated that they are not only a positive influence on the legislature, but also an essential component of seeing real change in the policies that govern our province. It was only after Greens were elected that [medical service plan] reform was committed to by all three political parties; that B.C. banned corporate and union donations at all levels of government; that our intention returned to what is in the best interests of British Columbians, rather than the vested interests of just a few; that an overhaul in the integrity and governance of this legislature commenced. And I commit to work to ensure that that sees an end.

Correction: The original version of this transcript noted an interruption by a heckler; in fact, the vocal noise that interrupted Weaver was caused by feedback echo on the sound system