Awarded Canada's top honour in 2009, Gretzky has yet to pick it up 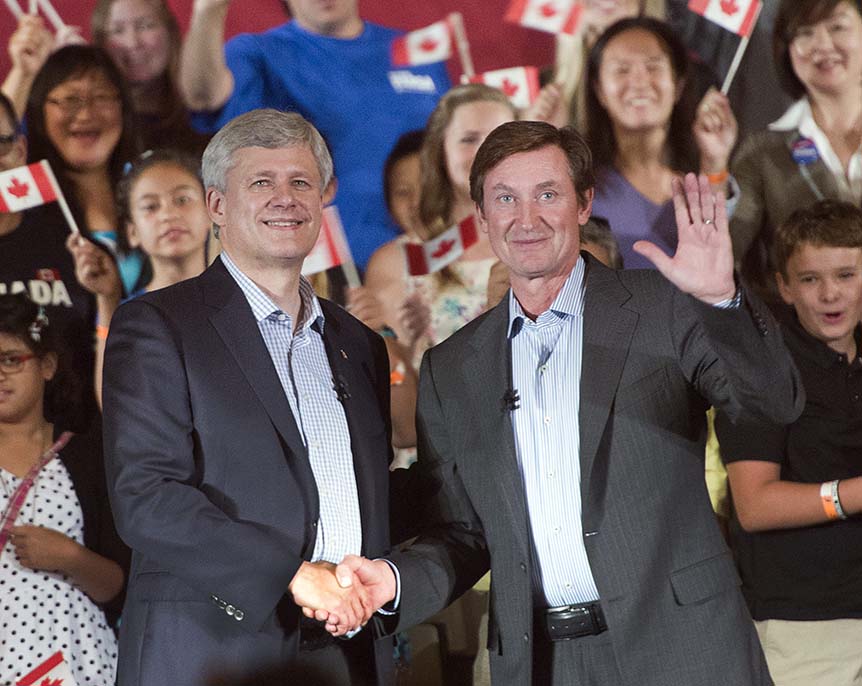 When Wayne Gretzky endorsed Stephen Harper on Sept. 18, calling him an “unreal Prime Minister” who has “been wonderful to the whole country,” many commentators pointed out that the California-based hockey legend was unable to vote in Canada. Yet that may not have been the most unusual aspect of Wayne Gretzky’s relationship with his home country.

Though he’s appeared in Canada numerous times, including at a Conservative political rally last week, as well as to take part in Canadian Tire’s newly launched #WannaPlay campaign—in a video, Gretzky plays street hockey in Edmonton—the wealthy retired hockey player hasn’t picked up Canada’s top honour, six years after it was awarded to him.

On Canada Day, 2009, Rideau Hall announced that Wayne Gretzky had been appointed a companion of the Order of Canada. It is the highest rank of the nation’s system of honours (above the ranks of officer and member). The “Great One” isn’t the only giant of hockey to have been so recognized: The list of companions includes Jean Béliveau and Maurice Richard. The Governor General’s website states that Gretzky was given it “for his continued contributions to the world of hockey, notably, as one of the best players of all time, as well as for his social engagement as a philanthropist, volunteer and role model for countless young people.”

Yet, Gretzky still hasn’t collected the insignia, a six-point white enamel snowflake with a stylized maple leaf at its centre bearing the order’s motto, Desiderantes meliorem patriam (“They desire a better country”), as well as a royal crown. Produced by the Royal Canadian Mint (and stored in an undisclosed, secure vault in Ottawa until the morning of the investiture), the honour’s insignia, which can be hung from a red-and-white ribbon worn around the neck, come with some intricate protocols as to when and how it can be worn. Luckily, there is a handy, picture-laden guide.

On Sunday, Adam Dodek, an associate professor at the University of Ottawa’s faculty of law, noted the irregularity found on the Governor General’s website.

More strange: Gretzky promoted to highest level of Order of Canada 2009 but still has not been invested w the award https://t.co/x8gC83L2Sj

In case the website isn’t up-to-date, Maclean’s asked the Governor General’s residence to double-check. It was correct. “Mr. Gretzky has been invited to attend investiture ceremonies at Rideau Hall. Attendance at these events depends on the recipient’s availability,” said spokeswoman Marie-Pierre Bélanger in an email.

When asked about the situation, Wayne Gretzky’s Canadian agent, Sam Galet, contacted the retired star, currently in Europe. Because the honour had to be picked up in person, and the Governor General’s investitures were held at specific times during the year, Gretzky has had trouble fitting one into his schedule, the agent says.

Yet there have been opportunities. On Sept. 11, 2014, Gretzky appeared on stage in Toronto with Stephen Harper, whom he praised: “It’s really nice to see that our Prime Minister is not only protecting Canadians in Canada, but Canadians around the world. So congratulations for leading our country the way you are.” The next day, Sept 12, Governor General David Johnston presided over an Order of Canada investiture in Ottawa, a one-hour flight away. Indeed, since then, four more events were held in November, February, May and this week, on Sept. 23.

Certainly, Gretzky’s delay in getting the honour is unusual. “Since the Order of Canada’s creation in 1967, 467 individuals have been named Companion of the Order,” Bélanger explained. “Of this number, there are five Companions, including Mr. Gretzky, who have not been invested. Two were appointed within the last six months. Two others are deceased.”

This isn’t the first time Gretzky has been a tad slow to collect an honour. He was first awarded the Order of Canada in 1984, this time in the officer class. It took him 14 years before finally being invested, on Jan. 28, 1998. Galet says it was because he was playing hockey. Regarding the current honour, companion, the agent went on to say they would try to fit the ceremony in Gretzky’s schedule. If it happens during Johnston’s tenure at Rideau Hall, perhaps Gretzky should bring his skates and gear. The Governor General played the game at Harvard and is known to enjoy hitting the ice. 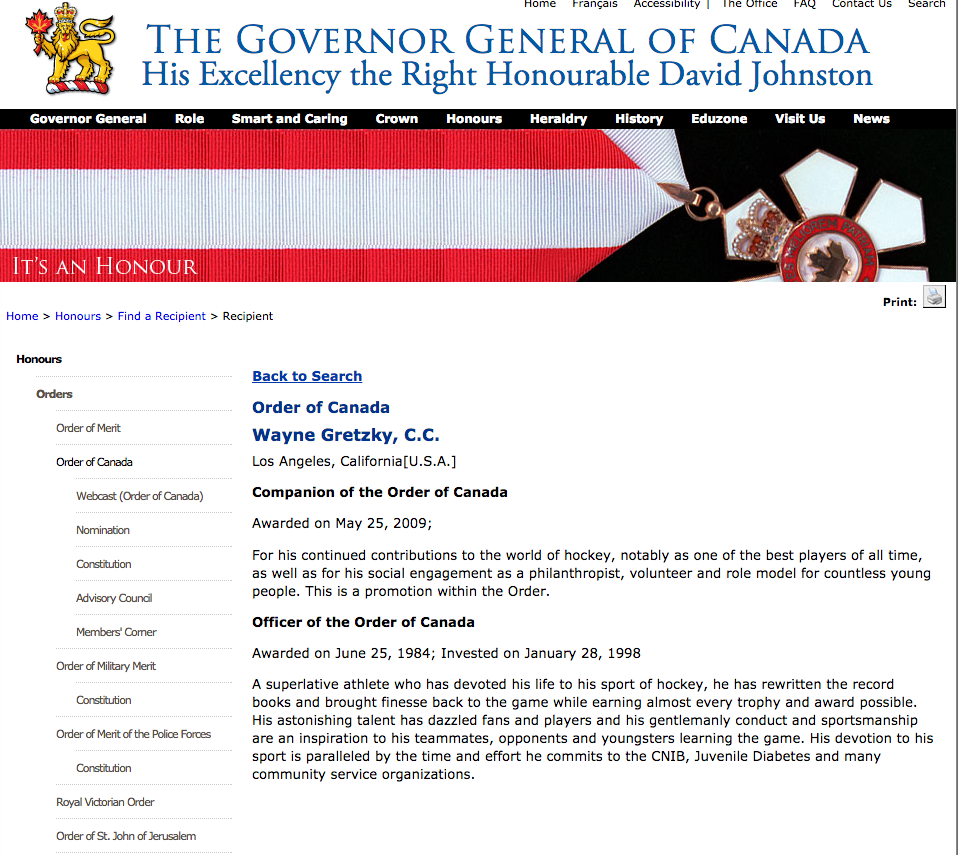