Beer, wine and pot next to candy bars: Does Kathleen Wynne know how great that sounds?

Doug Ford's promise to allow beer in Ontario corner stores induced choreographed outrage among his opponents. Their hypocrisy makes you want a drink. 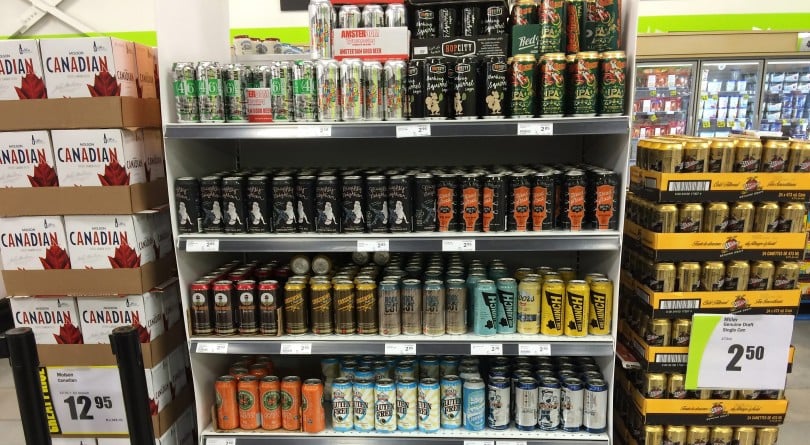 There are many issues on which Ontario PC leader Doug Ford has fairly earned the title “reckless.” Honest to God, I cannot understand why Premier Kathleen Wynne is bothering to append that label to his pot and alcohol policies.

Just as the sad, annual holiday tradition of booze line-ups played out at LCBOs over the long weekend, Ford announced that if elected he would allow the sale of alcohol in corner stores. In the past, he had also mused about private marijuana retail, though later clarified that he was talking about cannabis sale through the LCBO. A total and unnecessary retreat. Under the Liberals, Ontario intends to open dozens of specially branded Ontario Cannabis Store shops once legalization occurs later this year.

Of course, Wynne took the opportunity to wind up ever-present dread about the Safety of Children and how we should Think of Them. “You could have a situation where you have marijuana and beer and wine beside the candy bars,” she told reporters. “That’s the image we have to reconcile.”

Well, God forbid. If I am one day legally permitted—nay, encouraged—to procure both drugs and snacks from the same heavily regulated four-walled commercial outlet, the image that I am left to reconcile is the one in which I am passed out on a couch, covered in Cheezie dust and watching South Park because it’s shiny and colourful.

Not to be outdone in the moral panic department, NDP leader Andrea Horwath added: “I’m not happy that my cheese department now sells beer in my local grocery store…Not because I don’t like beer, but because I like cheese better.”

If I were to give her the benefit of the doubt, I would dismiss this line as an ill-considered off-the-cuff remark. But what fun would that be?

Instead, let’s note that grocery stores aren’t zero-sum operations. The presence of wine does not lead to a diminishment in the cheese selection. Alcohol and cheese wouldn’t even be in the same aisles of most stores, but even if they were, we do not live in Soviet Russia and do not have to resort to a Sophie’s Choice of food selection—meagre ration tickets in hand while queueing outside the GUM.

Canada is still a capitalist economy, nominally, and such markets tend to do logistics pretty damn well. If people want a wide selection of moderately price-gouging wine and cheese, I have a lot of well-placed faith in Loblaws to make that happen. Grocery stores can buy more shelves, if needed. Or they can rearrange the ones they have and artfully fill them with a plethora of overpriced, supply-managed Canadian dairy product.

Ontario progressives seem to maintain a deep puritanical streak that I can neither understand, nor reconcile. But, then I live in Alberta, a land that allows private liquor retail, so it’s possible that I’m both underage and drunk right now.

There is so much bizarre hypocrisy to all of this; first, the casting as “reckless” of an alcohol regime that is already in place in, um, Quebec. And the extreme, child-hating private pot retail about to be put in place in, uh, Alberta. Despite all reports, I can assure you that this province is not a bacchanalian hell hole outside that small stretch of Mordor in its far north.

RELATED: In defence of the LCBO: Ontario’s liquor history holds lessons for pot

Not even Jason Kenney, the leader of the United Conservative Party and default standard bearer of the conservative brand, has said boo on pot. The staunch Alberta Catholic is getting out-Reefer Madnessed by the gay Ontario Liberal.

Wynne deplored booze in corner stores even as she lauded her government’s role in putting wine and beer in grocery stores, a move she called a “balanced approach” on Twitter. Meanwhile, alcohol is already available in some small rural Ontario corner stores. “Agency stores” have been around since 1962. They allow those living outside urban centres the ability to buy alcohol and, presumably, candy bars.

If corner stores are so uniquely dodgy that they risk exposing innocent urban teenagers to the perils of dissipation—then why is the government indifferent to the plight of rural minors?

There are benefits and drawbacks to both private and public retail of alcohol and marijuana. But one of the best cases that can be made for the public option is that it’s less convenient, thus reducing access to alcohol. For those who point out that this is not a very compelling case, well, the more difficult, expensive, and frustrating your alcohol-buying experience, the greater the public health benefit. What other considerations could you possibly have, good citizen?

Ontario’s byzantine pot and alcohol policies won’t add up against the growing Highway 407 scandal —in which a PC candidate was disqualified after data stolen from the toll company were allegedly used to sway nominations. Alcohol probably won’t get much air time in light of another controversy just beginning to emerge; that Ford stands accused of paying for memberships and rigging a race in favour of PC candidate Kinga Surma.

RELATED: Is Doug Ford’s position on cannabis sales an opportunity for the NDP?

Or the fact that the PCs don’t really have a platform, per se.

No, the booze hypocrisy is just one of those bureaucratic rock-in-the-shoe habits that makes life worse for Ontarians in measured and unnecessary ways. It highlights all of the worst Liberal tendencies; the unquestioned faith in the competence of technocrats and unionized workers, in contrast to the broad misgivings of the private sector and the people in it. Progressive and moralistic. Earnest, but hypocritical.

Won’t somebody think of the adults?