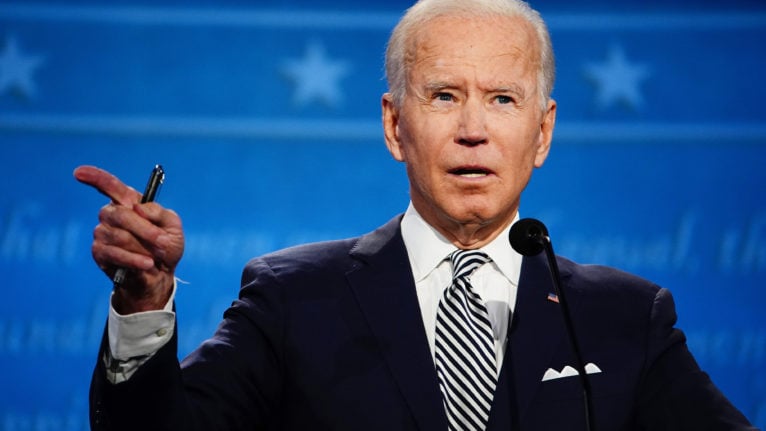 Pre-debate advice for Joe Biden was thick with that old, widely mis-attributed warning not to wrestle with a pig—you both get muddy, and the pig has fun doing it. The former U.S. vice president emerged from those 95 minutes almost indistinguishably caked with mud and excrement, while his Republican opponent, for whom there is no bottom, emerged wearing the same permanent smirk he had when Donald Trump entered the forum.

The most memorable line from the jumble of a debate will be Biden telling Donald Trump to “shut up,” and a few times calling the president “this clown.” These weren’t the soundbites the Democrats wanted out of this debate, but little else splashed out of the muddy arena. We remember from 2000 Al Gore rolling his eyes at George W. Bush, and Trump hovering menacingly behind Hillary Clinton four years ago.

From 2020, we’ll remember the incessant interruptions by Trump and the flashes of angry, dismissive frustration they drew from Biden—barring whatever ugliness comes out of the next two debates should they proceed as planned.

But Americans and viewers elsewhere were, in fact, treated to moments when Biden seemed to actually follow that ubiquitous advice. In a quiet (and fleeting) moment, the Democratic nominee turned away from his interruptor and looked straight into the camera: “How many of you got up this morning and had an empty chair at the kitchen table because someone died of Covid? How many are out of work?” He may have relied a few too many times on this rhetorical technique, which risks veering into cheesiness. But it allowed Biden to dispense with combativeness and convey sincerity by using the second-person address to urge viewers to wield the power of their vote: “He cannot stop you from being able to determine the outcome of the election.”

In a fiery exchange during the presidential debate, Joe Biden called President Trump a liar when the discussion turned to health care.

Given Biden’s consistently wide polling leads, apathy of Democratic and anti-Trump voters might be the biggest impediment to his victory. S0 stating this openly, in direct addresses to voters, cannot hurt. At the very least, it can be packaged into potent advertisements and messages to his base.

In the debate’s second hour, after Biden’s first several crude broadsides, he appeared to heed all that advice about not playing mud-croquet with Trump, and gave sobering, if dull answers about climate change and voter integrity.

If he is to emerge from the future debates as the bigger man that he’s widely expected to be, Biden will have to summon that unflappable character more often than he did in the first debate. The “clown” and “shaddup” retorts may be fantasy wish-fulfilment for avowed U.S. liberals, but they’re not a good look for a candidate trying to secure the centre. There’s a market in America for an alternative to the country’s incumbent pig, not for a mere replacement.