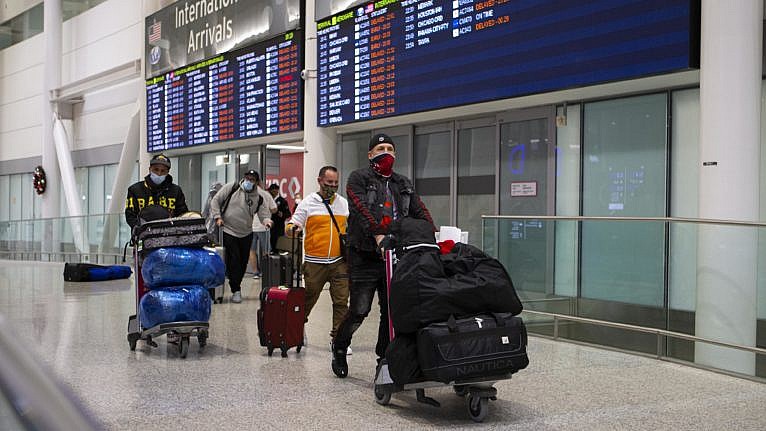 Omicron measures: Canada announced Tuesday that air travellers from all countries except the United States will need to take COVID-19 tests when arriving in Canada, CBC reports, as the world braces for the Omicron variant.

The tests will be required of all travellers, regardless of their vaccination status, Health Minister Jean-Yves Duclos said today. The requirement will also apply to Canadian citizens and permanent residents. Incoming travellers will have to self-isolate until they receive results of the test. Duclos said the new testing requirement will go into effect “as quickly and as much as possible over the next few days.”

The government also added Egypt, Malawi and Nigeria to its restricted list. Travellers from 10 countries will have to quarantine in designated facilities.

The world is waiting for scientists to figure out how effective vaccines are against Omicron. Dr. Isaac Bogoch, an expert at Toronto General Hospital, said we will have to wait to find out, but he thinks available vaccines will still prove useful in the fight against COVID-19: “It would be extremely unusual for a variant to emerge that completely erases the protective immunity of vaccines. It might chip away at some of the effectiveness but it would be extremely unusual that our vaccines, and or vaccine programs, are now rendered useless.”

May do more: Justin Trudeau told reporters the government may have to do more, Global reports.

Patience: In Maclean’s, Patricia Treble lays out what we know so far—not that much—about Omicron.

Omicron entered our lexicon at exactly 12 p.m. Eastern Time on Nov. 26, according to Google Trends, which recorded a massive spike in online searches. Since then, searches have only increased as people scour the web for news on the newest variant of concern. So new is the variant, however, that researchers are scrambling to unravel its secrets—likely for few weeks but possibly more—and pleading for patience.

Bans questioned: Even as Canada tightened travel restrictions, news was breaking that the variant had already spread to Europe before South Africa raised the alarm, raising questions about the fairness and efficacy of restrictions on African nations, the Globe‘s Geoffrey York reports from South Africa.

Over 60s stay home: The World Health Organization has urged those over 60 not to travel because of the increased risk posed by the variant, the New York Post reports.

Vaccines for poor countries: Opposition politicians and medical groups are urging the Liberals to support a global initiative to temporarily waive intellectual property restrictions on COVID-19 vaccines, CTV reports. The government says it will discuss the issue with the World Trade Organization.

Same spiel: The situation reminds Isabelle Hachey, writing in La Presse (translation), of the fight over AIDS drugs for Africa, and points out that Big Pharma can be expected to do whatever it can to prevent losing out on income.

The 168 member states of the WTO should take the opportunity to try to reach a consensus on the temporary lifting of patents protecting vaccines. So far, they have failed to come to an agreement. One can imagine that Big Pharma is doing everything to discourage them. The sums at stake are pharaonic. If we go by the past, it may be a long time before the member states come to an agreement. Millions of Africans died of AIDS before the WTO adopted the Doha agreement in November 2001, after years of intense activism.

Challenging times: In the Star, Susan Delacourt writes that the variant presents a challenge for the political class, because polling shows Canadians are anxious and depressed because of the pandemic.

But all signs are pointing already to a large, looming morale crisis, which politicians are going to have to struggle to contain in the days and weeks ahead. Just when Canadians were starting to plan holiday gatherings and winter trips to sunnier climes—and a long-awaited return to normal — the threat looms again of more lockdowns and renewed travel restrictions. So what does the political class have left in its arsenal — after nearly two years of this pandemic — to head off what could be the biggest wave yet of COVID-19 fatigue?

No jab? No travel: Unvaccinated travellers over the age of 12 can no longer board a plane or passenger train in Canada, CP reports. A grace period ended Tuesday.

Finished fight: In Maclean’s, your correspondent takes the temperature of the anti-carbon tax foes, who once looked like they might win, and concludes that the fight seems to have gone out of the main players, having lost in court and in several elections.

Ontario Premier Doug Ford, who won support from grassroots Ontario Tories by opposing a carbon tax, was happy to fight too. Manitoba’s Brian Pallister, who had a carbon tax plan of his own, joined in after Trudeau stood next to him and used him as an example of a co-operative premier. Behind the scenes, Stephen Harper was cheering the premiers on. “Let the other guys do a carbon tax, because we can all win the next federal and provincial elections on that issue alone,” he said in speeches. It did not seem far-fetched: in 2008, the Liberals lost an election built around Stéphane Dion’s Green Shift (a mix of carbon taxes and tax cuts). Today, Pallister is gone, Kenney is setting new records for unpopularity, Ford is no longer talking much about the carbon tax he once loved to attack and Moe is complaining. “They’re complaining but complying,” says Tim Gray, executive director of Environmental Defence, about the carbon tax.

Make it work: In the Post, Tasha Kheiriddin ponders the pandemic hybrid Parliament and concludes that it might be fine.

Virtual participation might even enhance productivity in certain contexts, such as committees, which could continue sitting even when Parliament is not. The ability to hear witnesses remotely could expand connection between legislators who would otherwise not be able to present themselves in person. The reality is that, with the work-from-home revolution, some form of hybrid Parliament is probably here to stay. We had better make it work.