Canada slaps a 'first round' of sanctions on Russia

Politics Insider for Feb. 23: War in Ukraine looms larger than ever; Jean Charest courts the Conservative leadership; confusion around what Emergencies Act means for donors 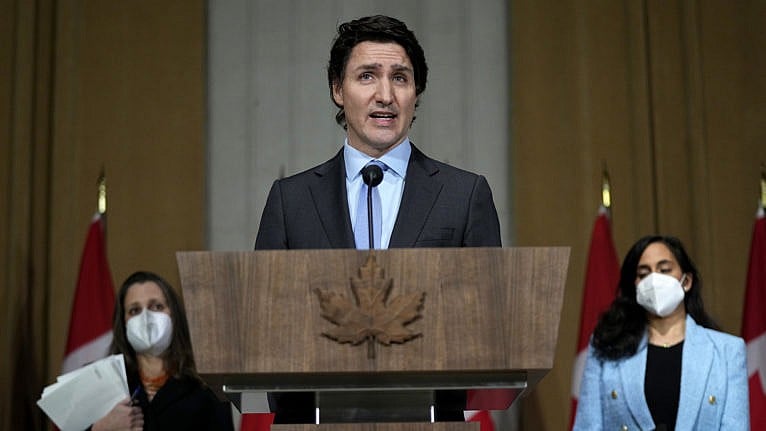 Prime Minister Justin Trudeau is joined by Deputy Prime Minister and Minister of Finance Chrystia Freeland, left, Minister of National Defence Anita Anand, as he speaks during a media availability on the situation in Ukraine, in Ottawa, Feb. 22, 2022. (Justin Tang/The Canadian Press)

Justin Trudeau is sending hundreds more troops to Europe and slapping a “first round” of new economic sanctions on Russia for its decision to send troops to two breakaway regions in Ukraine, the Globe reports.

“Russia’s flagrant disregard for the independence of a sovereign nation is a serious threat to security and stability in the region – and around the world,” Mr. Trudeau said. “We are taking these actions today in a stand against authoritarianism. The people of Ukraine, like all people, must be free to determine their own future.” Canada’s announcement comes one day after Russian President Vladimir Putin recognized Donetsk and Luhansk – two breakaway regions in eastern Ukraine – as independent territories and announced he would send in Russian troops.

Rubber stamped: The Globe’s Mark MacKinnon, reports from Kyiv that the Russian upper house has approved Vladimir Putin’s request to send troops “abroad,” and interviews Kyiv Mayor Vitaly Klitschko, who considers the two countries to already be at war:  “If the aggressor’s army comes to Ukrainian territory, what is it? I don’t have another explanation.”

Why it matters: CP’s Lee Berthiaume has a good explainer on why the prospect of war in distant Ukraine matters to Canada.

“We have support in all the provinces. People will be surprised by the support we receive, even in Western Canada,” a supporter of Charest’s candidacy said. All the sources spoke to Radio-Canada, CBC’s French-language service, on condition they not be named because they were not authorized to confirm candidates’ plans or to speak about internal party matters.

Locked up: Two key convoy organizers remain in an Ottawa jail as Tamara Lich was denied bail Tuesday and Pat King will wait until Friday to learn whether a judge will grant his request to return to Alberta under bail conditions, the Citizen reports.

Ontario Court Justice Julie Bourgeois said she believed there was a substantial likelihood Lich would re-offend if released. “I cannot be reassured that if I release you into the community that you will not re-offend,” Bourgeois said. “Your detention is necessary for the protection and safety of the public.”

King’s Facebook videos, including racist remarks, were shown during his court appearance.

King was cautioned by his lawyer, Cal Rosemond, following an outburst from the prisoner’s box early in the hearing and remained silent, occasionally slouching in his seat or fidgeting with his mask for the rest of the lengthy session. [Assistant Crown Attorney Moiz] Karimjee pointed to the “disturbing evidence” seen and heard in the widely-circulated videos and told the court King, like Lich, presented “a substantial likelihood” of reoffending.

A motion moved by Government House Leader Paul Calandra says the house expresses its disapproval of Randy Hillier’s “continued disreputable conduct.” It calls on him to apologize for what Calandra called racist and discriminatory statements about federal Transport Minister Omar Alghabra, and for social media posts that Calandra says were insinuating a call to violence.

Donors in clear: The RCMP, banking sector and federal government said Monday that the Emergencies Act does not affect donors to the protests, despite unsubstantiated claims by a Conservative MP that a constituent had her bank account frozen over a $50 contribution, the Globe reports.

“At no time, did we provide a list of donors to Financial Institutions,” the RCMP said in a statement Monday. The agency said while it had sent financial institutions a list of accounts to monitor and freeze, those accounts belonged to “individuals and companies suspected of involvement in illegal acts,” such as “influencers in the illegal protest in Ottawa” and vehicle owners and drivers “who did not want to leave the area impacted by the protest.”

Donors not in clear: Confusingly, the Post reports that officials told a Commons committee Wednesday that even small donations could be sufficient for freezing accounts.

“Just to be clear, a financial contribution either through a crowdsourced platform or directly, could result in their bank account being frozen?” Conservative MP Philip Lawrence asked Department of Finance Assistant Deputy Minister Isabelle Jacques. “Yes,” she replied. “They didn’t have to actively be involved in the protest, they didn’t have to be here in Ottawa at one of the blockades?” Lawrence asked. “No, not themselves,” she replied.

Ending: In any case, banks have begun unlocking accounts on Monday , the New York Times reports.

By combing through the nearly 100,000 people who donated to the protest via the crowdfunding website GiveSendGo, Torstar reporters identified 15 police officers who as of 2020 were on the payroll of the province’s three largest police forces: Ontario Provincial Police, Toronto Police Service and Ottawa Police Service. All three services had officers on the ground in Ottawa to police the “Freedom Convoy.”

Not how it works:  The office of Governor General Mary Simon tweeted Wednesday that Canadians can’t dissolve the federal government by contacting her office, CBC reports.

A no confidence vote by a majority of MPs in the House of Commons can lead to the dissolution of the federal government, but no equivalent mechanism exists for ordinary citizens. The clarification does not explicitly mention the Ottawa convoy protest and similar demonstrations across Canada in recent weeks. The organizers of the convoy protest said they hoped to dissolve the federal government through appeals to the governor general.

Troops called: In addition to calling on Simon to topple Trudeau, convoy supporters flooded DND phone lines on the weekend demanding the Canadian Army be used to protect the protesters in downtown Ottawa from police, David Pugliese reports in the Citizen.

Some of the callers claimed the police dispersing the so-called “Freedom Convoy” over the weekend were not real officers, but part of a covert United Nations invasion force. Military officials privately say the incident shows how fast conspiracy theories can spread and how gullible some members of the public can be.

Effective March 13, Ontario will scrap the fee as well as the requirement for drivers to have a licence plate sticker, Ford announced. The government is set to introduce red tape legislation that will also allow the province to refund any licence plate renewal fees that drivers have paid since March 2020. “We know the rising cost of living has made many things more expensive, and can make it harder for families to make ends meet,” Ford said Tuesday.

Good move: The Emergencies Act is not the War Measures Act, writes Ed Broadbent, who voted against the latter and supports the former, on National Newswatch.

Bad move: U of T law prof David Schneiderman, formerly of the Canadian Civil Liberties Association, offers an interesting history lesson in the Globe on the passage of the Emergencies Act in 1987. He does not believe the government has justified the invocation of the act.