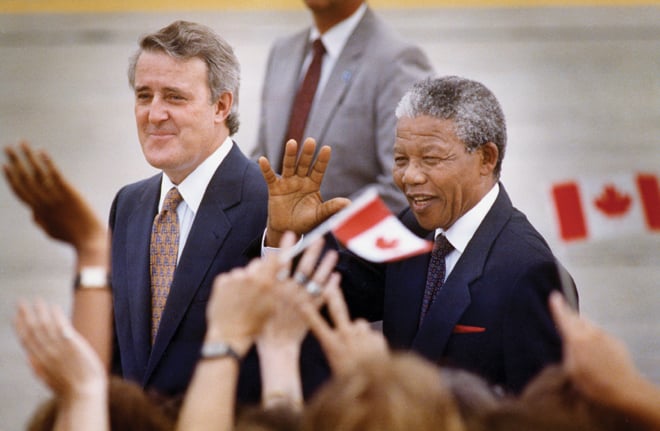 Only four months after Nelson Mandela was released from prison in South Africa on Feb. 11, 1990, he travelled to Ottawa, Montreal and Toronto as a gesture of thanks for Canadian support in the struggle against apartheid. He was 71 years old and had spent 27 years behind bars, so his health was the subject of wide concern. Asked about it at a news conference just off Parliament Hill, Mandela offered, by way of reply, only his enveloping smile and two thumbs up.

At moments like that, he seemed ageless. For many Canadians, who join the world in mourning his passing, memories of that first visit still feel almost definitive. It was when we realized how much his generosity could mean. The fact that he troubled to come here in those heady days—when he was first at liberty to start transforming his country—seems, if anything, more remarkable now than it did at the time. Had Canadians really done enough to be worthy of being praised, as he put it in his stirring address to Parliament on June 18, 1990, as “steadfast friends of our struggling people?”

According to Carleton University political science professor Linda Freeman, who has written extensively on Canada’s relationship with South Africa, “steadfast” was an exaggeration. In fact, through the 1960s and 1970s, while Mandela endured harsh conditions in a concrete cell on Robben Island, Canada did little to put real pressure on the racist South African government. “Pierre Trudeau’s policy was very lame,” Freeman says. “He defended trade and investment with the apartheid regime, and tried to mollify Africans with aid and rhetorical onslaughts.” His biographer, John English, writes that Trudeau thought economic sanctions were “unrealistic,” and expressed “irritation” with those who advocated them.

But Brian Mulroney’s 1984 election victory changed all that. “He did more on South Africa than any other Canadian prime minister,” Freeman says. It was Mulroney’s campaign to ratchet up the diplomatic and economic pressure on the apartheid regime—especially his battles with a recalcitrant Margaret Thatcher on the issue—that ultimately brought Mandela to Canada. “That was a very fine hour for Mulroney,” says Stephen Lewis, the former Ontario NDP leader who was Mulroney’s surprise choice in 1984 to be ambassador to the United Nations. “Because I’ve had contact with Mandela since then, I know that he felt that Canada’s role in his release, and in overcoming apartheid, was singular, very important.”

And Mulroney took on the issue despite reluctance from within the senior ranks of the Canadian foreign-policy bureaucracy.  Lewis tells the story of how, on Oct. 23, 1985, they sat outside the UN General Assembly in New York, looking over the text of a speech Mulroney was about deliver there. He had been prime minister only a bit longer than a year, and confided that External Affairs officials had taken out the part of his speech that would have threatened stern measures if South Africa didn’t show serious signs of reform. “He asked what I thought, and we talked about it,” Lewis says. “Of course, I felt strongly that it should be in. He said that’s exactly what he thought. So he independently reinserted what became the most vivid part of the speech.”

The section Mulroney restored at the last moment included a warning about “total” economic and diplomatic sanctions. “If there is no progress in the dismantling of apartheid, our relations with South African may have to be severed completely,” he said. In hindsight, the moral rightness of Mulroney’s position might seem obvious. At the time, his blunt words startled many UN delegates, who were used to equivocations from Western leaders on the plight of black South Africans, and they rose to their feet.

As a Conservative, Mulroney was then, and remains to this day, a staunch admirer of Thatcher and then-U.S. president Ronald Reagan. But on the South African question, he was at odds with them both. At Commonwealth meetings, he repeatedly pushed for stiffer sanctions against Thatcher’s intransigent opposition. Their clashes were no secret, but Lewis says outsiders didn’t realize how heated things got behind closed doors.

“I witnessed a session at the end of a Commonwealth gathering in 1987 in Vancouver,” Lewis says, “at which Mulroney gave Thatcher a tongue-lashing the likes of which I had not heard in those esteemed settings, in which you are supposed to be diplomatic.”

In recent years, Mulroney’s anti-apartheid policy has emerged a rare unchallenged highlight of his otherwise controversial political career. Carleton’s Freeman says the only serious criticism of Mulroney’s South Africa record is that his close, personal attention to the file lasted only from 1985 to ’87. After that, competing political preoccupations, including his successful push for free trade with the U.S. and failed bids at constitutional reform, dominated his attention.

But why was Mulroney so interested in the first place? In his memoirs, he writes simply that “the very notion of South Africa’s apartheid was anathema to me.” Another reason seems to be that he arrived in office suspicious about the External Affairs department’s desire to “train” newly elected politicians. So, with Lewis egging him on, he was inclined to push back against the department’s ingrained preference for paralyzing caution when it came to contemplating any sanctions that might hamper Canadian companies doing business in South Africa. As well, it’s worth noting that Mulroney had once been a young Tory follower of John Diefenbaker, who, as Conservative prime minister in 1961, briefly took a prominent role in ousting South Africa from the Commonwealth.

Mulroney’s engagement on South Africa reached a climax when Mandela singled him out for praise in his historic 1990 address to the Canadian Parliament. But for Lewis, the connection only deepened in later years. From 1993 to ’96, he coordinated an international study headed by Graça Machel, who later married Mandela, into how armed conflict affects children. Lewis and Machel remained friends. And then, from 2001 to ’06, Lewis was the UN secretary-general’s special envoy for HIV/AIDS in Africa. That role took him to South Africa often, and sometimes he dropped by the Johannesburg home of Machel and Mandela. “We would talk in a familiar way,” Lewis says. “That’s when I became aware of how deeply he felt about Canada’s role in fighting apartheid, and how deeply appreciative he was about Brian Mulroney personally.”

Asked if informal contact changed his perspective on Mandela’s mythic qualities, Lewis says he never detected any gap between the private man and his public image. “The mythologies always rang true. That’s what’s so fascinating about him,” Lewis says. “There was innate decency and dignity in the guy. You felt privileged to be in his presence. There was never a word of malice. He was always thoughtful. He wanted to see the best in human behaviour.”

And when he thought he saw it, a thank-you from Mandela could feel, as Canadians discovered in 1990, like a benediction few leaders have it in their power to bestow.