Canadians to watch at the Olympics: Steve Stamkos

Even a snapped tibia won't stop him from realizing his dream 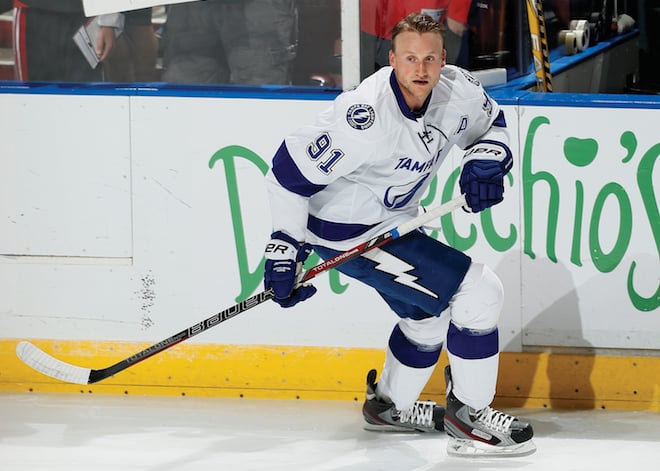 It’s made its mark, this Stanley Cup drought. Steven Stamkos was too young for kindergarten the last time a Canadian team hoisted hockey’s greatest prize and, even then, it was the wrong club. He had been raised a Leafs fan in the Toronto suburb of Markham, so watching Patrick Roy declare his intention to go to Disneyland once the Montreal Canadiens had finished partying with the fabled mug could scarcely have stirred his three-year-old soul.

For that, he would wait nearly a decade, and it came thanks not to the Leafs, but to Canada’s inspirational gold-medal victory over Team U.S.A. at the 2002 Winter Games. “That’s a really ingrained memory for me,” Stamkos told Maclean’s a few weeks ago in Toronto. “I was 12, and it was a bit late for me to be up, but I wanted to see the anthems and medal ceremony. My favourite players were on that team—Joe Sakic, Steve Yzerman, Mario Lemieux. It was a kind of first moment of consciousness for me. I understood what was going on, and the impact it was having on the nation.”

A 20-year-old Stamkos would watch again from his apartment in Florida when Sidney Crosby scored the Golden Goal, and the surge of national pride he felt soothed the sting of being left off the team that went to Vancouver. That season, playing for the then-listless Tampa Bay Lightning, he became the third-youngest player in NHL history to score 50 goals. That he’d be part of the conversation when Hockey Canada assembled a team for Sochi was never in doubt, least of all for Stamkos.

All this by way of explaining why a young man who has just snapped his tibia might cling resolutely to his Olympic dream. With the Games in Sochi just two months away, Stamkos is now recovering from a Nov. 11 injury whose mere description induces a shudder, and that would sideline mortal people for a minimum of six months. Yet there he was two weeks after the injury, standing in Florida without so much as a cast or cane, talking about “smart” recovery and blue-skying about getting back on the ice. “If everything works out, which I’m hoping it does,” he mused, “I’ll get a chance to come back and play a couple of games with Tampa and maybe get an opportunity to play in the Olympics. That would be great. That is a goal for me.”

This speaks, of course, to the kind of drive that carries an athlete to the pinnacle of his sport: Within hours of being gurneyed off the ice at TD Garden in Boston, Stamkos had gone under the knife, emerging from the O.R. with a titanium rod running the length of his tibia. The trade-off for a lifetime of delays at airport security is stability that allowed him almost immediately to put weight on the leg, walking with nothing worse than a limp. There will be bone-healing supplements and gruelling rehab. But, as any physiotherapist will tell you, the most important curative lies between the ears. It is work ethic, and Stamkos has it to burn.

His determination is also testimony, though, to the deep impression of those big Olympic wins. To a generation that has yet to see a Stanley Cup parade on Canadian soil, these memories, not NHL ones, are patriotic touchstones. And if the country hit a fever pitch for previous international tournaments—the Summit Series, Canada Cups—the transformation of the Winter Games into a de facto world cup has raised the stakes to new heights. The night of the gold-medal game in Vancouver, Stamkos was surrounded by Canadian buddies in Tampa, watching on a flat-screen. He’d battled Crosby in two games that season, and there was talk of him possibly, just maybe, supplanting Sid as the presumptive Greatest Player in the World. But when Crosby popped the overtime winner, vanquishing a valiant U.S. team, Stamkos was on his feet alongside his friends, cheering like he’d scored it himself.

From that night until his injury, he has given Crosby a run for his money, scoring 409 points in 390 regular season games, an astonishing 222 of them goals—Lemieux-like totals by the standards of today’s defensive-minded NHL. So it goes without saying that the crack of Stamkos’s right shin against a goalpost in Boston reverberated throughout hockey. Pundits drawing up prospective Olympic rosters put a line through his name, while Vegas downgraded its odds of a Canadian win. In Russia, surely, glasses of vodka were raised to his misfortune.

Now, with the shock worn off, it all seems a bit premature. Dr. Hans Kreder, a professor of orthopaedic surgery at the University of Toronto, is familiar with the procedure doctors performed on the superstar at Massachusetts General Hospital. Three months is enough time for the bone on an ultra-healthy specimen such as Stamkos to “knit,” he says. The biggest challenge may be caused by tiny locking screws that secure the titanium rod at the top and bottom of the tibia: “If you put on a tight skate and do a lot of twisting and torquing, those screws are quite irritating,” he says. “They can’t come out until the bone has healed.” That said, Kreder won’t be surprised if Stamkos is on skates, training hard, well before the start of the men’s hockey round robin on Feb 12.

In other words, it’s going to be close and, if he’s selected, there’s every chance Stamkos would be used sparingly until the latter part of the tournament. Knowing he’s in the press box, or on the bench, would be hard for fans who have admired his blinding speed and scorching shot—harder still for a player accustomed to 20 minutes of playing time a night. But it’s not like a kid whose heroes gained glory on Olympic ice would have it any other way.