Justin Ling: For the past 24 hours governments scrambled to come up with travel measures to address Omicron. Meanwhile, the wait for boosters and tests continues. 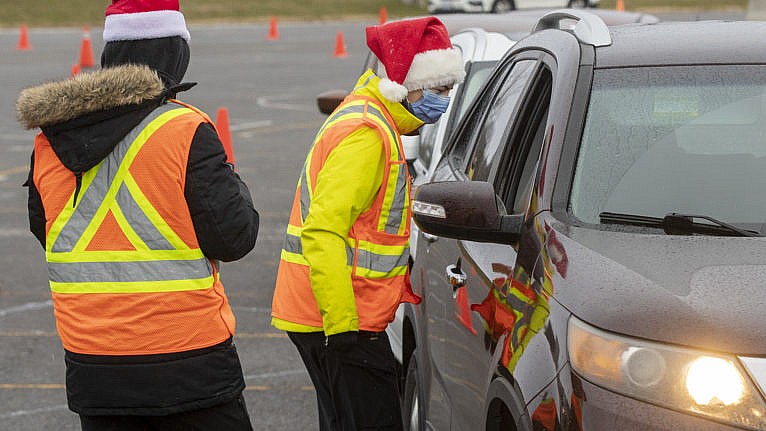 Volunteers speak with a family during a COVID-19 vaccine clinic at St. Lawrence College in Kingston, Ont. on Dec. 4, 2021 (Lars Hagberg/CP)

With just days to go before a massive Christmas travel rush, the Trudeau government is planning on ramping up COVID-19 testing requirements for arrivals in Canada’s soon-to-be-bustling airports.

But with warnings internally that the federal government does not have the testing capacity, and that backlogs could cause unimaginable airport delays, Ottawa seems unsure of how to manage the surge in travellers.

In a press conference Wednesday afternoon, federal ministers implored Canadians to avoid international travel. “It is not the time to travel,” Health Minister Jean-Yves Duclos said.

Beyond a new travel advisory, recommending Canadians avoid all non-essential travel, the government announced no major new travel measures, but suggested they may yet announce new steps.

The last 24 hours has been a scramble to try and put in place a new plan to manage travel, in the shadow of the Omicron variant, ahead of the Christmas holidays.

READ: Omicron versus booster shots: The high-stakes race in Canada is on

How we got here is emblematic of how governments have been caught flat-footed every step of the way during this pandemic.

Sources who spoke to Maclean’s say cabinet was briefed Tuesday by at least two departments on how it might ramp up testing in time for the holiday rush—but both warned the plan to test everyone arriving in Canada’s airports was practically impossible.

Civil servants warned that truncating that timeline from weeks to days, ahead of the busiest time of year for air travel, would cause massive delays and queues at airports across the country, so bad that social distancing inside the airports would be impossible.

Plans were submitted to cabinet in order to allow for some flexibility to go below that 100 per cent target, depending on air traffic volumes. The proposals suggest making more liberal use of take-home rapid testing, and focusing some resources to conduct testing at the land border.

The department proposed issuing a level two global travel advisory, which asks Canadians to “exercise a high degree of caution for non-essential travel.”

By Tuesday afternoon, those plans were passed over. Instead, the Trudeau government turned to the idea of reducing travel volumes instead of reducing their testing target. They opted instead for the stricter level three international travel advisory: “Avoid non-essential travel.”

Ottawa further considered the idea of banning foreign nationals from coming into the country for non-essential purposes; to reimpose the 14-day mandatory quarantine for travellers, regardless of vaccination status; and to end the testing exemption for those making trips of under 72-hours to the United States.

One source with second-hand knowledge of the call said those proposals went over poorly with the premiers. A second source confirmed that there was “not much enthusiasm” from the premiers. On Wednesday afternoon, Alberta Premier Jason Kenney said additional travel measures would be ineffective at this point.

The sources who provided details of the possible measures were not authorized to speak on the record, or spoke on background as the plans had yet to be finalized.

The Trudeau government opted not to enact any of those stricter travel measures, at least not yet. That left ministers sitting before the television cameras on Wednesday without much to announce.

The federal government has already imposed strict travel bans for a list of countries throughout Africa—even as flights from European countries also facing Omicron outbreaks continue. While sources expected those flight bans to be dropped Wednesday, the federal ministers did not even mention those measures.

Duclos said an announcement on new testing requirements for travellers is coming, but provided no details. Whatever Ottawa decides, more resources and capacity being funnelled towards Canada’s airports will do little to stop community spread already happening.

As of Tuesday, Ontario reported hundreds of new Omicron infections per day, and other provinces are seeing instances of community spread and superspreader events. It is likely that the variant is spreading faster than testing is able to measure.

South of the border, the Centres for Disease Control estimates about three per cent of all new COVID-19 infections in the United States can be attributable to Omicron: Roughly 2,000 cases a day.

At present, the data indicates that the Omicron variant is more transmissible than its predecessors and more adept at thwarting the immunity provided by vaccines and past infections. Yet, at the same time, the virus appears to be less severe, and our vaccines seem to be adept at preventing serious illness caused by the variant.

A private South African study found that, adjusting for vaccination status, the likelihood of hospital admission for Omicron is 29 per cent lower than Delta. (The study found an increase in hospital admissions for children with the Omicron variant, but cautioned that the increase may be due to children testing positive after being admitted for unrelated illnesses or injuries.) This matches with anecdotal reports for South African doctors who report that the majority of Omicron cases are mild or asymptomatic and the vast majority do not require oxygen.

On Tuesday, the European Centre for Disease Prevention and Control reported more than 2,000 confirmed cases of the variant across the continent, but no hospitalizations due to Omicron. On Wednesday, Denmark, which has seen nearly 3,500 cases, said it had about two dozen hospital admissions where the patient tested positive for Omicron prior or shortly after being admitted. The United Kingdom has reported that one patient who tested positive for Omicron has died in hospital, but released no details.

Early data from the United Kingdom and South Africa suggests that two doses of Pfizer’s vaccine prevents a symptomatic case of the Omicron variant in somewhere between a third and half of cases: But, more importantly, it found that two doses prevent serious illness in about 70 per cent of those cases. A booster dose was seen to provide significantly more protection.

The Trudeau government is taking some sensible measures to prepare. On the call with premiers, one source in the Prime Minister’s Office said Trudeau promised federal economic assistance would continue for businesses and individuals in the event new lockdowns are in order. On Wednesday, Deputy Prime Minister Chrystia Freeland assured the public that Canada had secured enough additional vaccine doses, and encouraged everyone to get a booster as soon as they are eligible.

The source said Trudeau called for provinces to move up their booster campaigns as well. Up to now, provinces were moving at a glacial pace to offer third doses to the general population, with most limiting access to older and immuno-compromised people only—even though an increasing proportion of the country has hit the six month point since receiving the second dose of a vaccine. (Half of the country will hit that point by late January.) In the last day, provinces seem to have woken up and are scrambling to make the shots more accessible more quickly.

The federal source said that “the main solution is dealing with community spread,” hence the funding.

All those investments are significant, and they come after Ottawa has dispatched millions of tests to the provinces. And yet, in most of the country, virus surveillance has been a boondoggle. Most provinces do not offer asymptomatic testing—you must either report symptoms or be a close contact of someone who has tested positive for COVID-19. In British Columbia it’s even worse: You can only get tested if you present symptoms. Testing backlogs across the country have left people waiting days to find out their results.

In some provinces, like Nova Scotia and New Brunswick, rapid tests are handed out liberally. In others, they are metered out selectively to workplaces and schools. In many places, the only way to get a rapid test is to shell out $80, or more, to a private clinic.

Given that asymptomatic people can transmit the virus—and that the Omicron variant is more infectious, and seemingly more likely to be asymptomatic—it is clear that we are only restricting access to testing because we lack capacity.

Indeed, we’re conducting fewer tests today than we were at the end of 2020, despite a litany of assurances from the premiers that testing capacity would only build with time. The big provinces are now scrambling to make rapid tests widely available, but it comes preciously too late.

On Wednesday, Duclos said the federal government had sent 85 million rapid tests to the provinces prior to December, while another 35 million are being sent out this month, and hundreds of millions more are expected to be shipped out next year.

Our political leaders have promised countless times since the start of this pandemic that they will be proactive. That they will prioritize prevention over reaction—that things like tests and vaccines need to be done so we can avert travel bans and lockdowns.

But the fact that Ottawa was keen to ban foreigners due to its own inability to ramp up testing capacity exemplifies just how little we’ve done to prepare.

Every single time, without fail, a new wave of this virus has come along and those past promises have been shown to be lies. To avert scrutiny, politicians love a scapegoat.

The fact is, Canadians are now just as likely to get Omicron from a neighbour or a visiting American as they are from a Tanzanian tourist or a Colombian emigree.

Those arriving in Canada will be tested twice, maybe three times, in a matter of days. Meanwhile, many inside Canada struggle to find a test.