Chief Isadore Day: 'These children didn't have to die'

A refugee in this country has more access to services than First Nations, says Day 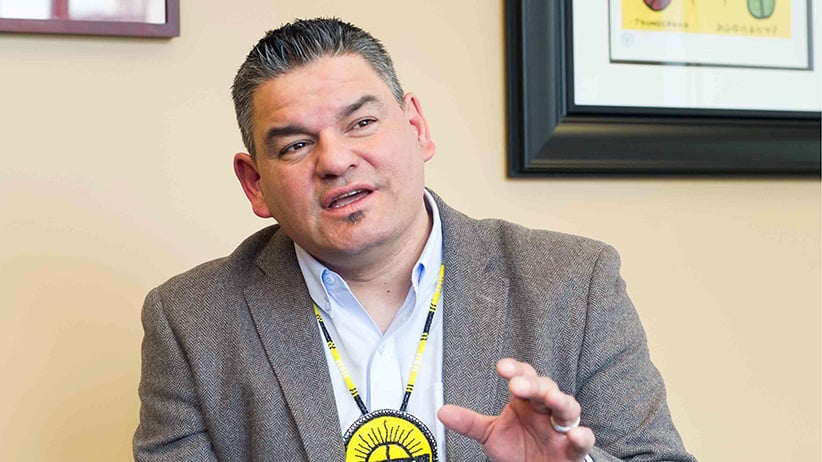 Chiefs of Ontario Regional chief, Isadore Day, Wiindawtegowinini at the secretariat offices in Toronto, ON. (Photograph by Cole Garside)

Isadore Day Wiindawtegowinini is the regional chief of Ontario for the Assembly of First Nations, whose jurisdiction includes 133 communities across the province. Among them is Pikangikum, a remote reserve in the northwestern wilderness. It is home to more than 2,000 Anishinaabe peoples, but as of last week, there were nine fewer: a baby, a toddler, a preschooler and their parents, maternal grandparents, and an uncle and his girlfriend were all killed in a house fire on March 29. There is no running water in Pikangikum with which to extinguish a blaze, and the nearest fire truck didn’t arrive in time. For Day, who challenged the federal parties during the last election to end boil-water advisories in First Nations communities within five years, the tragedy in Pikangikum amplifies his determination to improve infrastructure and social services for Indigenous populations across the country. As he recently told Maclean’s, this “Canadian crisis” is getting harder to ignore every day.

Q: How did you first learn about what happened in Pikangikum?

A: I was notified by our northern advisories and folks in government … even before they knew how many people had perished in the fire. I heard early in the morning.

What was your immediate thought?

My immediate reaction obviously was sadness and horror. But I also felt frustrated about the typical and predictable and unfortunate scenario of loss in our community as a result of not having the proper infrastructure. That’s the big issue here. This clearly is a preventable situation. 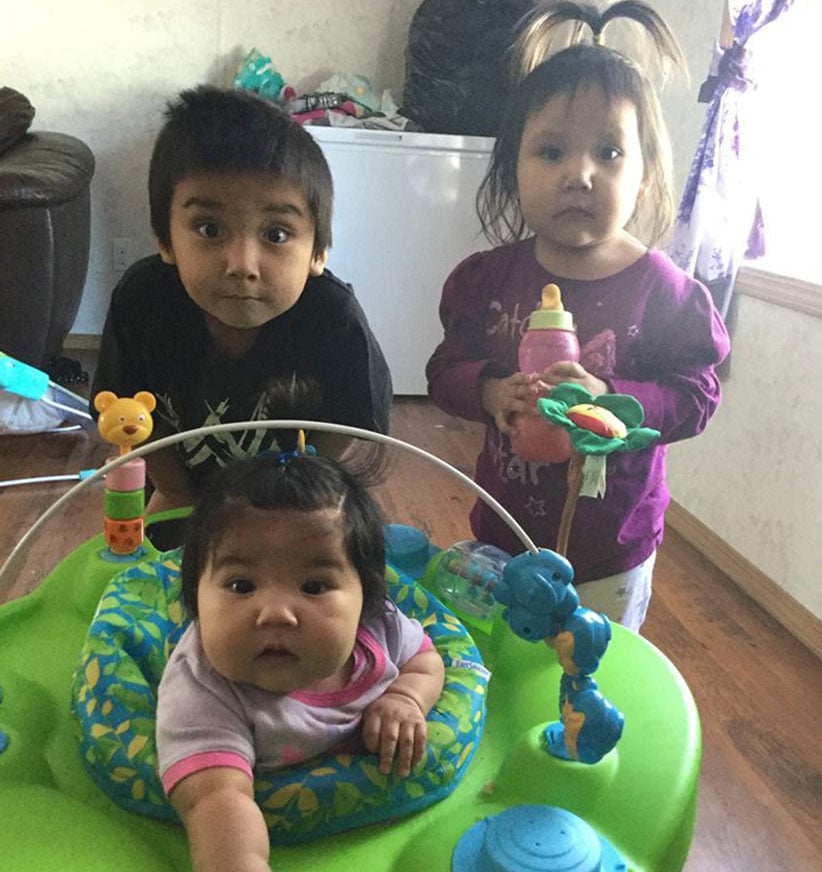 What have you heard about the community since the fire?

I called later on the following day, but I wasn’t able to talk to the chief because he was very tired. When this thing happened, all night, it really drained the energy out of the community. When I spoke with Mr. Kyle Peters [the community liaison], he indicated that the community was obviously in a state of shock. He also spoke about the close-knit nature of the community, that they would find the strength to make it through.

Do you have a sense of what effort was made to try and stop the fire?

I can only speak in generalities because much of this is part of an investigation. There was a fire-cessation attempt made, however the fire truck from [the neighbouring town] just was not fast enough. It was a situation where they didn’t have the means to save lives. They had no running water in the home. They don’t have running water in over 90 per cent of the homes. There’s no fire hydrant outside. Whatever efforts they made were futile. Basically, the community members had no choice but to watch the fire just burn.

There’s been analysis about how this happened. Lack of access to water is a big part.

There’s a number of things. I don’t know at this point if it was a wood fire, I’m assuming that heating the home was obviously related to this issue. So we have to question, were these substandard conditions? Were there codes in place? Did they have the proper tools to ensure that fire prevention would prevail? There’s the overcrowding issue—nine people living in a house. And then, you have the fact that there’s no running water in the house, no fire hydrants outside, and overall just poor infrastructure.

Is what happened in Pikangikum unique, or are the circumstances that led up to it?

How many fires have happened, how many lives have been lost in this way?

The statistic out there that’s being used right now, it comes from a 2012 study that says First Nations are 10 times more likely to die in a house fire than mainstream Canada.

Pikangikum has been in the news, but so has Kashechewan First Nation. Images circulated online of babies and children with terrible skin rashes. The community has concerns about contaminated water; authorities have said the problem is overcrowding and sanitation. What’s your understanding?

It’s poverty. The reality is that First Nations in the remote north are not part of 21st-century Canada. Every refugee [who] comes to this country has far more access to health care, clean water, food security, infrastructure, housing, while First Nations communities in the north are still living in Third World conditions.

Related from macleans.ca: Can the Liberals keep their promise to First Nations youth?

You called a state of emergency in late February. Why, and what has been the response?

There were alarming statistics about increased numbers of communicable disease. There were two kids who died of strep throat infection. We’ve got increased number of suicides, and a very scary changing demographic—more seniors committing suicide. There’s the two 10-year-old children who took their own lives in the Nishnawbe Aski Nation territory within this past year. The state of emergency speaks to very specific issues, but this is an overall Canadian crisis. I have to be clear about that. This is why you’re seeing First Nations leaders saying we need to start a new dialogue. Let’s get all-weather roads in place. Let’s upgrade nursing stations to actual health centres. How do we even fathom that this will uphold the human right to health for First Nations in the north? There’s a number of human rights violations that are occurring at the hands of government ignoring reality.

The latest federal budget earmarked billions of dollars toward what [the government] called “transformative change” in Indigenous populations. What was your reaction, not only to the amount of money devoted but to the way in which it’s being directed?

I have to speak to the initial campaign promises made by the Trudeau government … on ending boil-water advisories in five years. That’s the No. 1 issue. That’s actually one of the more promising pieces of the budget, where the Trudeau government realized it needed to follow through on that, and it actually is beginning to do that work. But I’ll tell you, it can’t happen fast enough. In our [recent] meeting with federal Health Minister Jane Philpott and provincial Health Minister Eric Hoskins in Toronto, we were very clear that the sequence of investment hitting the ground is problematic to meeting the needs of First Nations, and actually saving lives, as we’ve seen in Pikangikum.

Meaning it needs to happen faster?

It needs to happen faster. We need to sit down and look at the most prevalent ways [in which] people are either succumbing to chronic disease or emergency and we need to troubleshoot where and how things are not working, and how fast-tracking those investments to the community right away might help.

On the matter of boil-water advisories, has there been any movement on the frontlines?

We are having trilateral discussions on the source protection and safety side, the standards side, and with the federal government we’re talking about capital investments. We’re prompting the government and the government is saying, “We’re moving as fast we can.”

Related from Cathy Gulli: Why can’t we get clean water to First Nations reserves?

So are you feeling optimistic at this point about the boil-water target?

I’m feeling determined. I’m feeling anxiety. And I’m also feeling a sense of relief. That’s only going to become more sustained relief once changes are made to the way that government gets those investments down and action is undertaken.

In January, the Human Rights Tribunal ruled that the federal government has been discriminating against First Nations by underfunding child welfare services on reserves. One of the criticisms about the federal budget has been that not enough money was directed toward Indigenous children. Did you have thoughts on that?

As First Nations, we very much appreciate the work of Cindy Blackstock, [executive director of the First Nation Child and Family Caring Society, who first launched the human rights complaint]. She took the issue of child poverty and investment in child welfare and she raised that to a level of social justice that nobody could deny. And if the government isn’t working with those [tribunal] recommendations, then the government is flat-out wrong.

How do Pikangikum and Kashechewan fit into the context of that historic ruling?

The Liberal government is setting a dangerous tone. [It needs] to re-examine the overall budget, policies around engagement, inclusion, and they need to line up the principles of nation-to-nation, the commitment on the UN Declaration on the Rights of Indigenous People, the Truth and Reconciliation Commission, and the Human Rights Tribunal ruling. If they cannot remain consistent with those principles and values, then perhaps they’re also doing an injustice to Canadians because this is a national issue.

You have children. For you, who is in the midst of this injustice day-to-day, how do you process this as a parent?

It goes back to your first question [about] how did I feel, what was my response [to Pikangikum]. I was sent a picture of the three babies who perished in that fire. Looking into their eyes, you could see these little spirits were vibrant, colourful, full of life. To see that snatched away, it just deepens a sense of despair and frustration. But I’m actually more determined than ever. These children didn’t have to die. This government has the power to make decisions and investments to prevent these things, and bring the vibrancy of progress to the communities in a spirited partnership. As a parent, even without me being the chief, I have to have discussions with people on the street, I have to let Canadians know, friends, acquaintances, that there’s a problem in the country right now. Canada will never, ever achieve what it aspires as a strong nation until it actually corrects the systemic and institutional racism against Indigenous people.