The B.C. premier in conversation with John Geddes 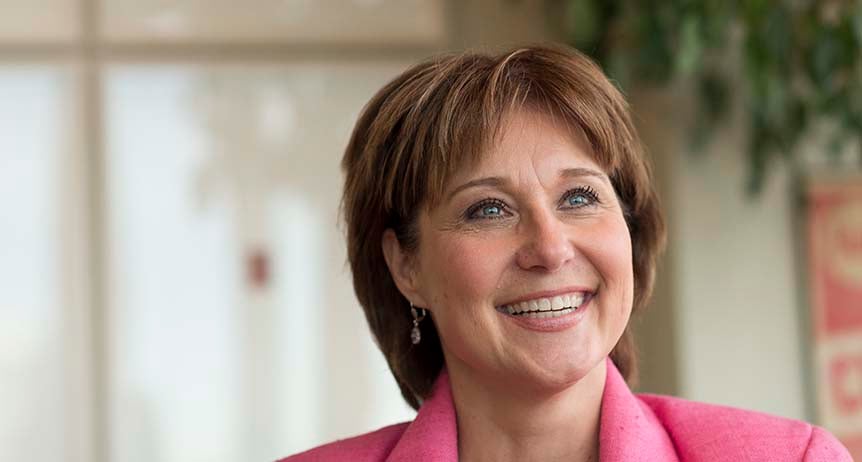 British Columbia Premier Christy Clark hosted Prime Minister Justin Trudeau and the other provincial and territorial premiers in Vancouver last week for a meeting on climate change. Just after those sessions, she talked with Maclean’s, first about combatting global warming, but also about Vancouver house prices, women in politics, and a certain populist contender for the U.S. Republican presidential nomination.

Q: Prime Minister Justin Trudeau reportedly went to Vancouver seeking a firm commitment from the premiers on pricing carbon. But he seems to have had to accept something more vague, a six-month study of carbon-pricing mechanisms. Is that how do you interpret it?

A: I think you’re never going to get somewhere ambitious if you don’t start out with great ambitions. What I would say is: we got a start. That to me is a very significant thing. Here we were, a historic meeting to talk about climate change.

Q: Will provinces be held accountable at some point? That’s something I haven’t heard anyone firm up yet.

A: I hope that people will be held accountable, even if accountability just means naming it and letting the citizens of the country know where you’re at. I think that has a huge impact on the way people think. You can’t say British Columbia’s carbon tax is exactly the same as increasing hydroelectricity rates in another province. They’re very different mechanisms, but we shouldn’t deny that both of them can have an impact, and that’s why we’re talking about this broadly.

Q: A lot of Canadians might have heard B.C. has a carbon tax, but not know much more than that. Can you explain why it’s important?

A: To put it in context, the federal government was, at the beginning [of the Vancouver meeting], talking about a $15-per-tonne floor for carbon emissions. We’re at $30 a tonne, so we’re already double that. But our economy is growing at a faster rate—three per cent of GDP is our projected growth in British Columbia.

Why is it you can impose a new tax and keep your economy growing? Only if you cut other taxes by exactly the same amount. The problem with carbon taxes around the world has been you dump a new tax onto the economy and it’s just adding more tax. We know taxes slow down economic growth, so if you add a carbon tax you have to also minus other taxes. You can’t take more money out of people’s pockets. I don’t think you can build a consensus in this country about environmental policy if you’re going to make people poor.

Q: B.C.’s environmental movement is famous. But you’re broadly in favour of economic development, including, with conditions, pipelines and oil tankers. How do you reconcile the environmental and economic imperatives?

A: I have a broad view that we have to try and get to “yes” on projects. On economic projects anybody can say no. My 14-year-old can say no. But I think the hard thing to do is to figure out how you get to “yes” and you protect the environment. One of the things I do know about investment from around the world and job creators: they won’t come to British Columbia if our attitude is well, “no,” or all of our processes are just going to be a way of making sure you can’t get to “yes.” They’ll just go somewhere else. Those jobs will be somewhere else. We have the resources the world needs. We can build a path for them to get there. That’s that delicate balance that we find.

Q: You’ll have been premier for five years this month, which is the longest ever for a woman running a Canadian province. What do you think when you see Hillary Clinton looking like a possible U.S. president, or hear that Prime Minister Justin Trudeau has appointed an equal number of men and women to his cabinet?

A: I read a piece in the New York Times that really struck a chord for me. Here Hillary Clinton is probably the most qualified person based on experience to ever run for president of the United States, and then this guy gets into the race, Bernie Sanders, and suddenly everybody goes, “Look at him. He’s a real contender—”

A: Exactly, the guy can sell like you wouldn’t believe right?

Q: I was joking. Do you actually find Bernie Sanders charismatic?

A: He’s got something. He’s got an anti-charisma. His ideas are generally kind of completely unworkable ideas, but everybody goes “Look, here’s the guy.” I just think about how many women in their workplaces have been working to get a promotion, and they look around, and then this guy comes. She’s got all the experience. She’s shown loyalty to the company over the years. She’s really worked hard to get things done. That’s what I see, that almost universal experience that women have where it’s just hard for some people to see us as qualified.

Q: What about the question of gender parity in the federal cabinet. Do you like that approach?

A: My cabinet is almost half women.

Q: As a policy or did it just happen that way?

A: It just happened, because I choose the most qualified people. We need to run more women in parties in ridings where they can be elected. That’s what I really focused on, so that we have more women to select for cabinet, potentially. But I’m not a believer that you should set quotas for these things, because I think what happens is no matter how qualified the woman is who gets the job, people will say she shouldn’t have gotten it. She only got it because she’s a woman. That is the problem with quotas.

Q: I don’t know how you define your political style, but I think of you as a populist of sorts. You used to have a radio show and you have a certain direct way of talking. But Donald Trump is putting populism’s dubious side on display these days. What do you think about that?

A: You’re about to compare me to Donald Trump?

Q: No, I’m saying there’s a certain stream of politics that relies on an ability to perform in mass media in a certain way. I think you have it to a degree. Is that something we should be worried about if that becomes a qualification or a prerequisite for people achieving high office?

The way I would characterize what you said about me is I do try to say what I think as clearly as I can without first thinking, “Uh-oh, which way is the wind blowing and are people going to like this?”

Q: When Canadians think about B.C. right now, they think about its very expensive housing in Vancouver. How much are you preoccupied by that—or do you think the market decides how expensive houses are and government can’t do much about it?

A: There are limits to what we can do. That’s for sure. That is true. One of the downsides of a growing economy [is that] we’re accommodating a lot more people. They’re buying houses and the market is growing. That is part of the downside of that, but I think that all of us do have to decide to act on it.

We’ve begun. We’ve excused all houses up to $750,000 from our property-purchase tax. We have more to do. There are other measures we intend to take to try and address housing affordability. There are things we can do. There are limits to it and we can’t do it by ourselves.

We do need the federal government to share information with us. We need local governments to increase supply. We need affordable places for people to live. That is at the top of our agenda right now.

Q: I’d like to circle back to the environment. I understand you’re due to release a a new stage of your climate action plan this spring. You’re the first province with a real carbon tax. Will it be going up?

A: Our climate leadership team has recommended it go up and I would say there’s always going to be upward pressure to raise the carbon tax. Remember, we’re already double what the only other province who has a carbon tax is at right now, Quebec—they peg it at about $15 a tonne.

A: Well, no. I’m conscious of competitive issues, but at the same time the recommendation they make is that we protect citizens by not adding to the overall tax burden of the province.