Politics Insider for Mar. 30: Trudeau tells big oil to go green; more sexual misconduct allegations in the military; a look back at the saga toward the F-35 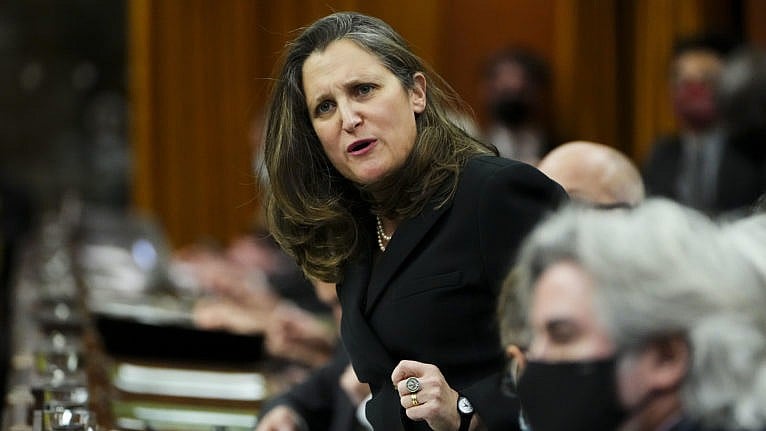 Freeland stands during question period in the House of Commons on Parliament Hill in Ottawa, March 29, 2022. (Sean Kilpatrick/The Canadian Press)

Chrystia Freeland announced the date of her second budget in the House on Tuesday, the Globe reports: “Our government was re-elected on a commitment to grow our economy, make life more affordable and to continue building a Canada where nobody gets left behind. That is exactly what we are doing and that is what we’re going to continue to do in the budget that I will present to this House on April 7th, 2022, at 4 p.m.”

The 2022 federal budget will be an opportunity for the government to outline how it intends to wind down the massive emergency spending related to the COVID-19 pandemic, while delivering on the billions in promised new spending from last year’s Liberal Party election platform and the recently announced parliamentary co-operation agreement with the NDP. The agreement involved the NDP pledging to keep the minority Liberal government in power until June, 2025, in exchange for action on NDP priorities, including dental care, pharmacare and increased federal transfers to the provinces for health care.

Justin Trudeau told the Canadian oil industry Tuesday that it should use profits from the surge in prices to fund a transition to cut emissions, CP’s Mia Rabson reports. Ottawa’s new emissions-reduction plan, tabled in the House on Tuesday, projects the oil and gas industry needs to cut emissions 42 per cent from current levels by 2030: “With record profits, this is the moment for the oil and gas sector to invest in the sustainable future that will be good for business, good for communities, and good for our future. Big oil lobbyists have had their time on the field. Now, it’s over to the workers and engineers who will build solutions.”

The plan uses economic and emissions modelling to gauge the most affordable and feasible projects when it comes to Canada’s target to cut emissions by 2030 to no more than 60 per cent of what they were in 2005. The most recent emissions inventory is from 2019. It shows that Canada produced 730 million tonnes of carbon dioxide, or its equivalent in other greenhouse gases such as methane and nitrous oxide. Canada needs to get to between 407 million tonnes and 443 million tonnes to hit the current target.

Navy misconduct: Two senior female officers say they are leaving the military because the commander of Canada’s Atlantic fleet refused to hold three subordinates to account for attempting to cover up a sexual misconduct case, Ashley Burke reports for CBC. Lt.-Cmdr. Nicole Dugas and Lt.-Cmdr. Jennifer McGean are leaving the Navy after losing trust in Rear-Admiral Brian Santarpia.

Dugas claims her boss, Cmdr. Ian Bye, sexually harassed her and abused his position of power as a senior officer in charge of base administration. He was charged with making a sexual comment in the mess on Oct. 22, 2020, given a written warning and fined $1,500. The navy released Bye in July 2021 as “unsuitable for further service” following an administrative review, according to a letter sent to Dugas. But three other senior, male officers involved in the handling of Dugas’ misconduct case were not held accountable, Dugas and McGean claim.

Jet saga: CP’s Lee Berthiaume takes a look back at the bumpy 12-year procurement process that will likely end up with Canada buying F-35s. Queen’s University’s Kim Nossal says Stephen Harper’s Conservative government tried to rush the purchase of 65 F-35s by failing to do their due diligence,  then Justin Trudeau made a “rash” and untenable promise in 2015 not to buy the F-35 while also promising to hold an open and fair competition to replace the CF-18s.

“The Liberal government spent a good five years trying to find ways to square what was an unsquareable promise,” he said. “And only recently, did they finally get around to doing it in such a way as to get the decision that they came down with yesterday.”

Jurisdictional overreach: Opinion columnists continue to ponder the NDP-Liberal non-coalition. John Ibbitson writes in the Globe that Trudeau is strong-arming the provinces by stepping into their jurisdiction, unlike earlier, wiser Liberal leaders.

This is both wasteful and hazardous. Wasteful, because provincial governments are the best judges of their priorities. They should not be dictated to by a federal government that – from Indigenous services to defence procurement – has proved itself incompetent in program delivery. Mr. Trudeau’s heavy-handed approach will only increase resentments, both in Quebec and in the West. And those resentments will grow, when history repeats itself and the federal government reneges on its share of the funding responsibility.

Voters want it: In the Star, Susan Delacourt writes that Monday’s Doug Ford-Justin Trudeau announcement of a new child-care deal shows that there is an appetite among voters for federal action.

Somewhere, Ronald Reagan and Margaret Thatcher are spinning in their graves, as all of their 1980s crusades to present government as the enemy are relegated to ancient history. The most obvious, immediate answer to the what-happened question is two years of COVID-19 and a global pandemic. It was hard to argue that government should be getting out of people’s lives when state-financed subsidies and vaccines were keeping money in pockets and people out of hospital. Still, the need for subsidies and vaccines will eventually fade away. But the idea that government needs to be a force in Canadians’ lives has not, like it or not.

Working moms: Also in the Star, Heather Scoffield writes that the child-care deal is tough to criticize because of the benefits for productivity.

Much of the economic case stems from the conviction that once accessible, affordable, quality daycare is available, parents — especially women — will join the workforce in much greater numbers. The labour force participation rate is the linchpin. It happened in Quebec, where women’s participation rates in the workforce were below the national average before $5-a-day child care was put in place, but eventually surged well past the national average.