Could this officially be the beginning of a post-NAFTA era? - Macleans.ca 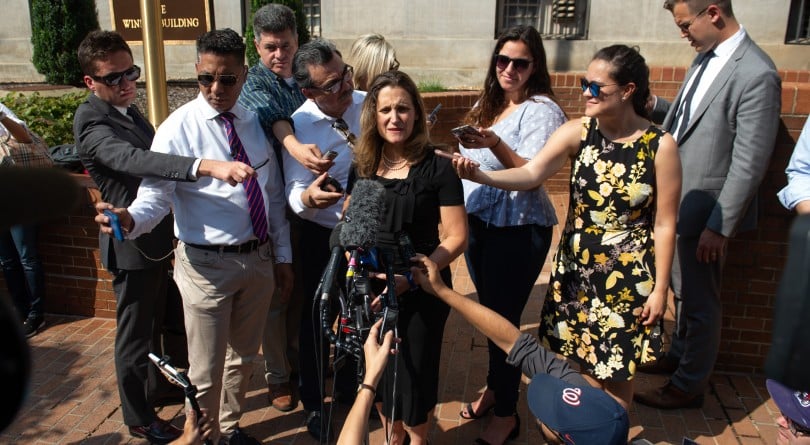 Canadian Foreign Minister Chrystia Freeland speaks with reporters as she arrives for a meeting at the US Trade Representative's office in Washington, DC, September 19, 2018. (SAUL LOEB/AFP/Getty Images)

This week’s deadline for the trade talks might mark the beginning of the post-NAFTA era, writes Maclean’s Ottawa bureau chief John Geddes. Canadian officials are seriously mapping out how two bilateral deals might replace the current Canada-U.S.-Mexico agreement. Check out the scenario one official sees for how the U.S. might ratify an agreement with Mexico while simultaneously negotiating a separate agreement with Canada. (Maclean’s)

That plot line certainly fits with what U.S. trade chief Robert Lighthizer keeps saying: “The fact is, Canada is not making concessions in areas where we think they’re essential. We’re going to go ahead with Mexico. If Canada comes along now, that would be the best. If Canada comes along later, then that’s what will happen.” (The Hill)

The Reuters news agency has dug into the backstory of how Trump drove a rift between Canada and Mexico in the first place:

A day after winning the Mexican presidential election, Andres Manuel Lopez Obrador took a congratulatory call from U.S. President Donald Trump. But Trump had something more important on his mind: Would Mexico’s new president consider a bilateral trade deal? (Reuters)

If he had to guess, Paul Wells thinks New Brunswick’s re-elected Liberal Premier is done for. After a nail-biter of an election Monday night, with the Liberals and Tories virtually tied and two smaller parties carrying the balance of power, Liberal Leader Brian Gallant got the nod from Lt.-Gov. Jocelyne Roy-Vienneau to form the next government. But his grip on power in tenuous, to say the least. (Maclean’s)

The next provincial election is coming up Monday in Quebec. Sovereignty won’t be on the table, but populism is. And with a radical left party eating up an increasingly significant amount of the vote, if you believe the polls, this is the dawn of a new era in Quebec politics that the rest of the country needs to pay attention to. The Big Story podcast delves into Quebec’s anything-but-normal election. Check it out. (The Big Story)

F-bombs are rare in the House of Commons. Over the last 15 years there were only two instances when MPs uttered the F-word in debate. Tuesday saw a new addition, when NDP MP Romeo Saganash blasted the Trudeau government for pushing to build the Trans Mountain pipeline expansion. “Why doesn’t the Prime Minister say the truth and tell Indigenous peoples that he doesn’t give a f–k about their rights.” Saganash apologized, but said the government’s actions on the file make him furious. (Canadian Press)

It wasn’t the only unparliamentary rhetoric of the day. Taking to Twitter, Conservative immigration critic Michelle Rempel unloaded on Veterans Affairs Minister Seamus O’Reagan, calling him a “ridiculous coward” and “disgrace” for allowing the department to pay benefits to Christopher Garnier, the son of a veteran, who claimed he got PTSD from killing an off-duty Halifax police officer yet never served a day in the military. But then later in the day O’Reagan directed Veterans Affairs to be more critical of such cases, and ordered that, going forward, benefits will no longer be provided to veteran’s family members incarcerated in federal prisons—though he wouldn’t say whether Garnier will see his benefits cut. (Twitter, Canadian Press)

Diplomacy while keeping a straight face is hard. Allen Abel was at the United Nations General Assembly as the delegates chuckled at Trump’s self-praise. From his dispatch:

On Tuesday, when the American president began his speech by boasting of “Extraordinary progress … more than almost any administration in the history of our country” they laughed at him in the General Assembly, a self-conscious twittering at first, then building in volume and audacity, rippling around the hall.

“I didn’t expect that reaction, but that’s okay,” Trump smiled, handling the insult perfectly. Compared to what awaits him back in Washington—the accusations levelled against his Supreme Court nominee; the impending H-bomb of the Mueller report and the imminent canning of the deputy attorney general who wondered about secretly taping the president to determine if he is mentally ill—being mocked by noblemen from Moldova or Mauritius was hardly the end of the world. (Maclean’s)

For all the scrutiny Trump-Trudeau handshakes once drew, only Bloomberg seems to have picked up on the cold shoulder Trump delivered to Trudeau at a UN lunch. The President didn’t bother to stand up from his table when the Prime Minister tapped him on the shoulder, though Trump did stand, shake hands and chat with both Mexico’s Enrique Pena Nieto and Egyptian President Abdel Fattah El-Sisi when they stopped by. (Bloomberg, video)