Deep in Trump country, democracy takes the form of a one-armed man

America has dissolved into partisanship and Trumpism. But in Knox County, Kentucky, they still have Bill Oxendine 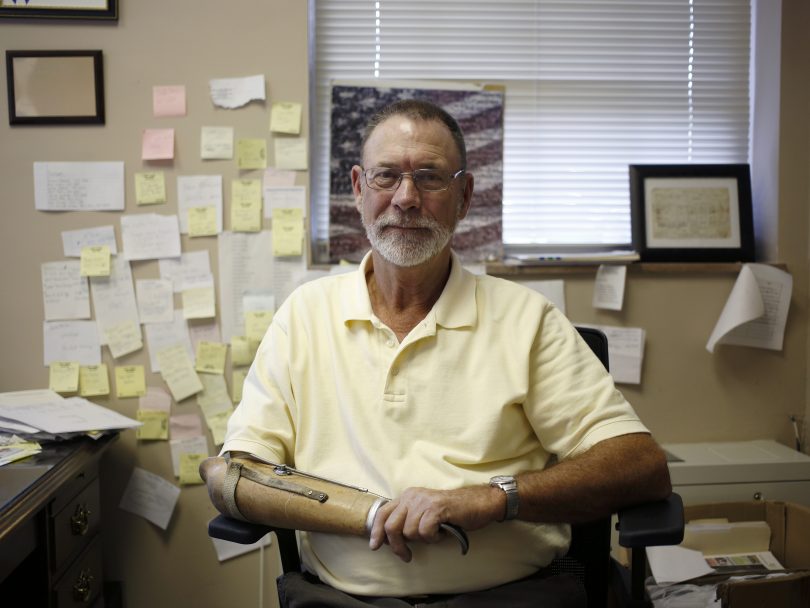 Bill Oxendine in his office at the Knox County Courthouse in Barbourville, Ky. (Photograph by Luke Sharrett)

The trees were just beginning to show a little colour in the Cumberland Gap as it wended through the ancient Appalachians, but it was a wonder that any of them still were standing and hadn’t been pulped to make the dozens and dozens of election posters that were blighting and brightening the four-lane highway as soon as a traveller crossed the Knox County, Kentucky line.

This was the autumnal landscape of America’s experiment with government by the rabble in the republic’s 240th year—the balloting for petty magistrates and dogcatchers and coroners and trustees and committeewomen and Clerks of the Court of Common Pleas that are held in every jurisdiction from national to nominal. (All right, there currently is only one duly elected dogcatcher in the entire country—a dude named Zeb in Vermont—but you get the point.)

As the country road curved closer to a county seat called Barbourville, the signs sprouted even more floridly.

And, most intriguingly of all, in big, bold capitals, was one that said, simply:

This was a reason to turn off the highway and try to find out what on earth an Oxendine could be.

Barbourville, Ky. turned out to be one of those towns that is small enough that you can park for free anywhere, but big enough that—around the courthouse, at least, on a weekday morning—there wasn’t anywhere to park. Out front was a statue of Daniel Boone, the pioneer/conquistador who led the first white settlers through the Cumberland Gap in the 1770s toward the Eden of bluegrass and buffalo that the rustics called Kaintuck. Boone’s brother and two of his own teen-aged sons were the toll of the forerunner’s land-lust; manifest destiny was his, and his country’s, blood-won prize.

“I can’t say as ever I was lost,” Old Dan’l is quoted on the pedestal, “but I was bewildered once for three days.” 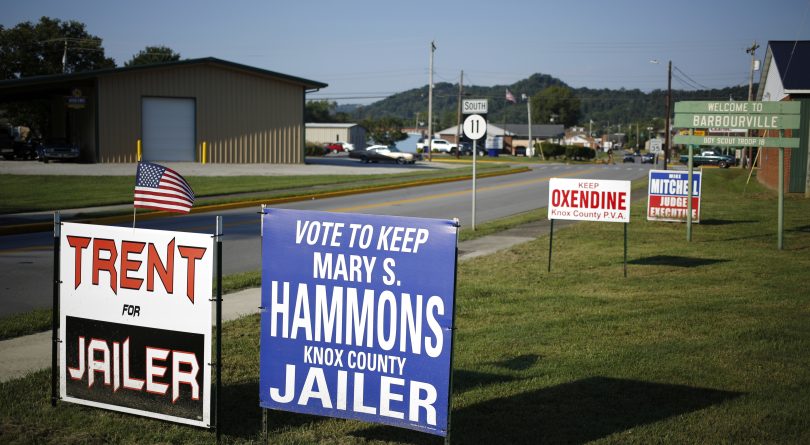 You had to surrender your handgun to enter the building, but, sure enough, just down the hallway was a little sign above an open doorway and the sign said “Oxendine.” Inside, at his desk, was a remarkable yet ordinary man who seemed to exemplify whatever the bewigged inventors of this country prayed their infant republic might become, but usually didn’t, dissolving instead into partisanship and Trumpism and power-lust.

Bill Oxendine, incumbent and now candidate for a fourth term as the Property Valuation Administrator of Knox County, Kentucky, rose and extended his big left mitt for a handshake because instead of a right hand he had a prehistoric metal hook.

So that was what a PVA was; “a constitutional officer of the county,” said Administrator Oxendine, whose family had been here since about 1825 and who had farmed and taught high-school math and science here for a quarter-century and who had a photograph in his office signed by Miss Kentucky of 2005 with an inscription that said, “To my favorite teacher—thanks for a great education.”

Bill Oxendine said that there were about 3,000 enfranchised citizens in Knox County and that, come November, it would be a good thing “if they all voted, which they don’t,” and this would be true even if they voted for Blevins, his adversary and “a nice young man from a good family.”

“Turnout has fallen off the last few years,” the assessor lamented. “It’s down to about 30 per cent. I’d like to see 75 per cent, that is democracy at work. I don’t like to see the minority decide for the majority.”

This is what happened in 2016, of course, when three million more Americans voted for Hillary Clinton than for Donald Trump. Oxendine, a lifelong Democrat, was one of those Hillary supporters. But Trump won Knox County —as the Republicans have in every presidential election since 1912, save Lyndon Johnson’s in 1964—by a margin of seven to one.

“Franklin Roosevelt made the comment one time that the only thing to fear about democracy is that the people who are supposed to represent that democracy don’t go out and vote,” Mr. Oxendine related.

“Didn’t he say that ‘the only thing we have to fear is fear itself?’” the officeholder was asked.

“Franklin Roosevelt said a lot of things,” he replied.

In 2018, just like Bill Oxendine, Barack Obama was back on the campaign trail, blasting The Donald’s indelicacies and urging, begging, pleading for his attendees to actually show up and mark their X. There was a House race up in Lexington between a rather bland Republican incumbent (male) and a former Marine combat pilot (female) that was being held up (and grotesquely funded by both parties) as the fulcrum on which the future of Congress (and Trump’s impeachment) could turn.

RELATED: How American democracy could slowly fade away

But national politics was not at issue in Barbourville. There was not a campaign sign in sight for the Honorable, 80-year-old, Hal Rogers, the Republican stalwart who has been Knox County’s Member of Congress for the past 37 years. Rogers is so prominent in this part of the Bluegrass State—this is the whitest Congressional district in the country—that a freeway has been named for him and he isn’t even dead.

“I have a problem with the national Democrats,” Bill Oxendine said. “I don’t think we’ll ever get anybody elected until we get someone in the middle and not on the extreme of either side.”

“Is that where you are?” he was asked. “Why should somebody vote for you and not Bob Blevins?”

“My door is always open from eight o’clock to four o’clock,” the incumbent/candidate answered. “Nobody likes to pay taxes, but I’m willing to listen in confidence to anyone who comes through that door.” 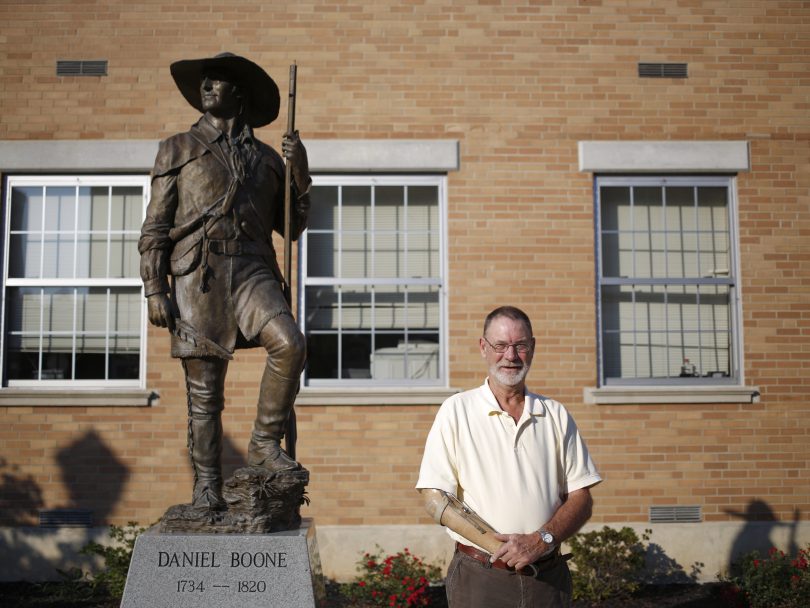 Oxendine outside the Knox County Courthouse (Photograph by Luke Sharrett)

At this, one of the clerks in the outer office popped in to praise the amputee. Her name was Molly and she said, “Thanks to this man, I was able to make a home alone with two small children.”

“You can’t hire your own family!” his visitor yelped.

“Nepotism saved my life!” said Molly Oxendine. And a voice chimed in from outside the door from another clerk named Cassie.

“I’m Bob Blevins’s cousin by marriage!” she enthused, a winner either way.

Bill Oxendine was thinking about more than Knox County and its looming elections for Jailer and Magistrate and PVA. He said, “I think that every congressman and public official should sit down and watch that movie that they show to tourists in Washington, D.C. about how this country was built and what it stands for. All they’re in for is themselves.”

“When you look at Donald Trump, what do you see?”

“Confusion. Some chaos. The left hand doesn’t know what the right hand is doing.”

You are wondering about the hook. In 1976, young Bill Oxendine got his right hand caught in a mechanical corn picker and the doctors took his arm off below the elbow. “I guess I had been home from the hospital for about two or three days,” he remembers, “and I was sitting on the porch, crying. Well, there was this older fellow around here who had crushed his arm in a press, and yet he had been able to work as a coal miner his whole life.  Imagine that —a one-armed man in a coal mine.

“He came over to see me and he said, ‘You need to dry yourself up. You’ve got a college degree—you’ve got a much better chance than I did.’ I guess that’s the lesson of my life—stop crying. Dry yourself up.”

Married 39 years to the same woman, still fishing and farming and caring, still able, he said, “to pick up a fence pole” with that spring-loaded steel claw, the one-armed evaluator of Knox County, Kentucky pressed on in a country that has been bewildered now for three crazy years, still searching for the next Daniel Boone.

“I once heard someone say ‘I’ll have to vote for that Oxendine man, that’s the only job he could get,’” niece Molly came in and said in the courthouse in Barbourville. “He had no idea what this man can do.”

“I think you have to be optimistic,” said Bill Oxendine. “If you’re a negative person all the time, you’re doomed.