Three feisty leaders unleashed zingers, told each other off, and even talked foreign policy 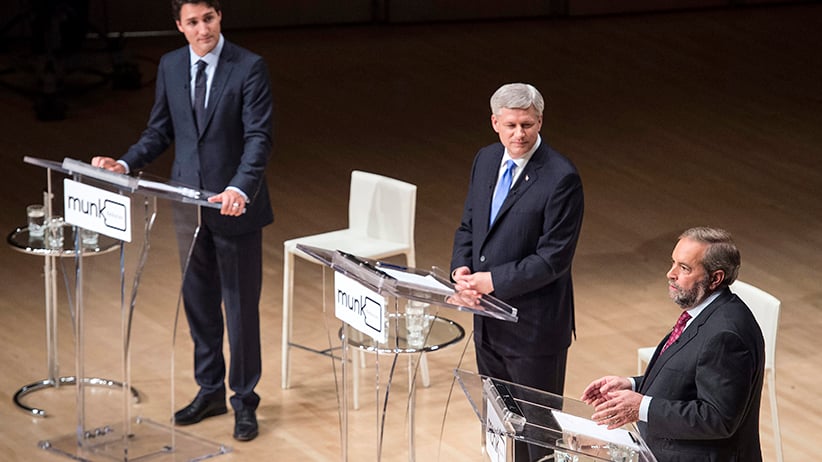 You just knew that three federal leaders told to talk about foreign policy in a leaders debate would try to find spots, here and there, to talk about domestic issues where they want to score points with viewers at home. But Conservative Leader Stephen Harper, NDP Leader Thomas Mulcair and Liberal Leader Justin Trudeau stuck largely to the terms of the Munk Debate, moderated by Rudyard Griffiths, and Roy Thomson Hall heard an earful of foreign policy.

We won’t declare winners and losers here, but instead shine a light on six moments worth watching. Each helped shape what was a meaty two-hour debate.

Early on, Trudeau took a minute to passionately defend his father’s reputation and legacy as prime minister. The elder Trudeau died 15 years ago to the night, and his son saw fit to remind the crowd at Roy Thomson Hall of Pierre’s finer accomplishments. “Both of these gentlemen have, at various points, attacked my father,” said Justin, referring to the other leaders on stage. “Let me be clear: I am incredibly proud to be Pierre Elliott Trudeau’s son.” He credited his father with the Charter of Rights and Freedoms, a policy of multiculturalism, and the pursuit of bilingualism—”which means, Mr. Mulcair,” he said, throwing a glance the NDP leader’s way, “saying the same thing in French as you say in English.” That’s a swipe at Mulcair’s alleged propensity for crafting separate—and arguably opposing—talking points in Quebec and the rest of Canada. The crowd applauded, not for the last time.

I think the rule Trudeau is setting down, rather firmly, is that only he gets to talk about Pierre Trudeau. Mulcair pivots to C-51 substance

MULCAIR: The NDP is a party of courage

Mulcair got the first chance to respond to Trudeau’s reflections. “Sorry to hear that Mr. Trudeau thinks we’re talking about his father in a negative way. I’m talking about historical fact,” said the NDP leader. “The only Canadian party that stood up in 1970 to defend Canadians’ rights and freedoms was the NDP.” Viewers left wondering about the reference should know that Mulcair was recalling the NDP’s famous opposition to the former Trudeau government’s invocation of the War Measures Act in response to the October Crisis in 1970. It’s a time-honoured tradition among New Democrats to differentiate themselves from their opponents by way of their parliamentary voting record in decades past.

If the camera was showing Harper right now as Trudeau and Mulcair go at it, I’m sure he’d be grinning like toddler in an ice cream shop.

HARPER: ‘The threat we face today is not CSIS. It’s ISIS.’

As our Michael Petrou tweeted, Harper must have enjoyed his place between the two left-of-centre leaders vying for the “change” vote and arguing each other straight into the ground in the process. The Conservative leader, sounding comfortable on a security file where his critics sense weakness, unleashed a zinger after arguing with both opponents that his goal with Bill C-51—now the Anti-Terrorism Act, 2015—was to balance individual rights and national security. The goal: remind viewers of Canada’s foreign enemies. Fortuitous, then, that Canada’s spy agency and the heinous Islamic State allowed for a little wordplay.

Harper’s most effective rhetorical device is adopting a tone of mild exasperation.

If fierceness of debate is defined by most sustained cross-talk, Trudeau and Harper won the Fierceness Award when they talked at each other about government’s appropriate approach to citizenship for terrorists. The last Parliament’s Bill C-24 granted the feds the right to strip Canadian citizenship from convicted terrorists who remain citizens of another country. Trudeau dismissed the law as creating two tiers of citizenship: those who can’t have it taken away, and others who can. Harper sounded incredulous. “Are you seriously saying that you’d never be able to revoke citizenship from somebody? Because we revoke the citizenship, already, of war criminals.” The crowd applauded. A few seconds later, Trudeau returned fire. “We have the rule of law in this country, and you can’t take away citizenship because you don’t like what someone does.” His own round of applause, proof the room was split, followed.

Sturdy of Trudeau to speak out against the revoking of a convicted terrorist’s citizenship. He has to know that’s a tough sell. #MunkDebate

MULCAIR: ‘If you can’t stand up to Putin…’

When the debate turned to Russia’s aggression in eastern Europe, Mulcair attempted a sucker punch on Trudeau, who’d just finished outlining his own criticism of Vladimir Putin’s regime. “It’s interesting to hear Mr. Trudeau say what he’s going to do with Mr. Putin. Mr. Trudeau, you can’t even stand up to Stephen Harper on C-51. How are you going to stand up to Putin?” The crowd sounded shocked more than impressed at what sounded like a forced attack. Mulcair seemed taken aback by the audience’s reaction as he launched into a lengthy indictment, stumbling at times, of Harper’s anti-Putin sanctions policy.

What’s worse: politicians who knowingly BS about Cda being able to influence Putin or a pol who actually thinks that?

HARPER: ‘I have a great relationship with President Obama.’

Harper seemed to turn the crowd over the course of a 45-second defence of his “great” relationship with U.S. President Barack Obama’s administration. As he reassured the crowd that the White House doesn’t have a hate-on for 24 Sussex, nor vice versa, the crowd chuckled. But when he denounced his opponents’ plans to withdraw from the bombing campaign against Islamic State—”If you really want to poison the relationship [with the U.S.], that would be the way to do it”—the crowd put its hands together. Harper found a way to turn jeers into cheers.

Laughter when Harper says he has a good rapport with Obama. But applause when he says pulling out of ISIS fight would hurt Cdn/US relations.