Election Image of the Day: By disrupting the Liberal leader's event, they raise a question: what credible Canadian politician wants any part of them and their foul-mouthed crusade? 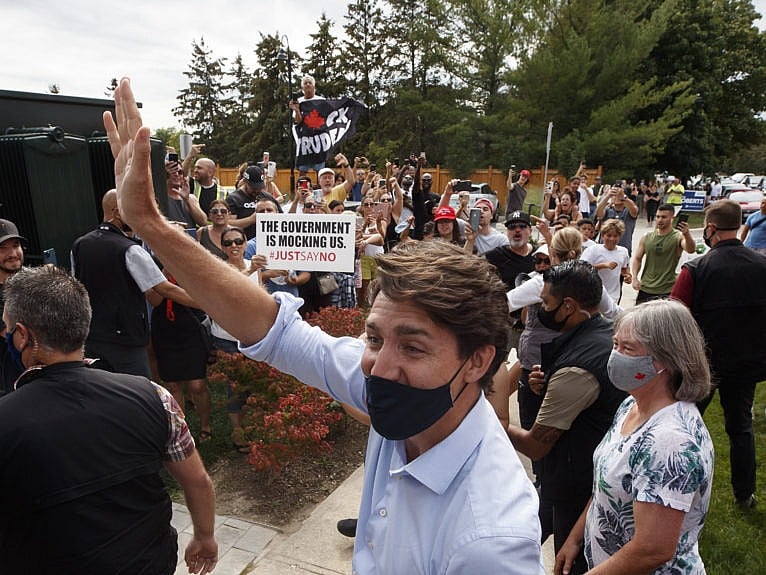 It is entirely possible that Prime Minister Justin Trudeau has at some point in the past two weeks sat down, sighed, and considered that calling this election might have been a mistake. Not only have his polls numbers plummeted since he went to the Governor General on Aug. 15, putting his party neck-and-neck with Erin O’Toole’s Conservatives, but his nationwide tour has brought him face-to-face with some very angry Canadians who, to put it euphemistically, disagree with his policies. On Friday dozens of those Trudeau haters showed up to an outdoor event of his. They flipped him off, swore incessantly, shouted loudly, booed vehemently and waved banners like the ones above, cursing his name and opposing vaccine passports. Over the past fortnight, Trudeau has tried his best to ignore such people and stay polite— “Please get vaccinated,” he’d shout back in the campaign’s early days—but emotions have since amplified. Team Trudeau ended up cancelling the event, a rare move in Canadian politics. Speaking afterward to reporters, he explained that he’d “never seen this intensity of anger,” and agreed that the scene wasn’t safe for his supporters or staff. Trudeau’s main rivals swiftly condemned the aggression, while Kyle Seeback, the Conservative candidate for Dufferin-Caledon, where the protests took place, took the extra step of banishing his volunteers who showed up to swear at the PM. It’s easy to chalk this uncomfortable moment up to American-style rhetoric bleeding north of the border. But there is a silver lining: Canadians can rest easy that none of their political leaders are Donald Trump.