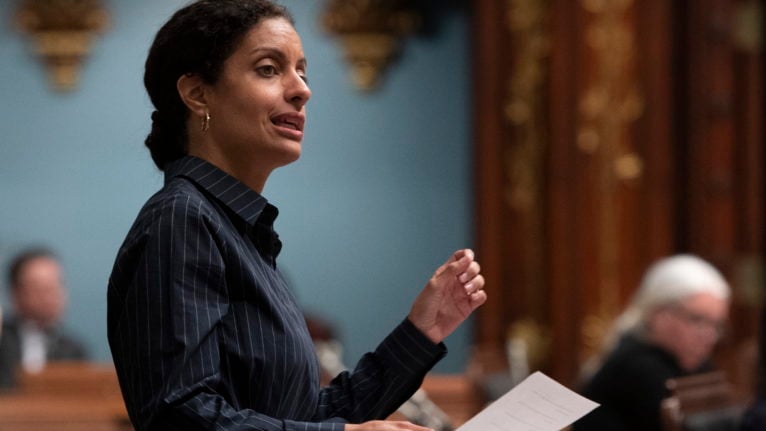 Dominique Anglade, the leader of the Quebec Liberal Party, is the first visible minority woman to lead a major political party in Canada. She is also the first woman to head a party that has held power longer than any other in the province’s history.

Anglade’s accession to the leadership occurred in the middle of the pandemic and went largely unreported outside of her home province. She has already made history and has everything it takes to do so again at the next election. The next premier of Quebec may well be a Black woman and she deserves to be known by all Canadians.

Anglade is the daughter of Haitian immigrants who found refuge in Canada after battling the François Duvalier regime. She wasn’t just taught social justice, she has lived and breathed it her entire life. Her parents were both academics who had gone to France for much of their studies and held doctorates in their respective fields. Her father, Georges, was a geographer who helped found the very progressive Université du Quebec à Montréal. Her mother, Mireille Neptune, was a respected economist who also taught high school. They were social justice warriors in their home country.

Shortly after Dominique’s birth, her father was arrested and held without charge on a visit to Haiti as he and his family, including two-month-old Dominique, tried to leave the country. Sentenced to death by Jean-Claude Duvalier (also known as “Baby Doc”, the son of François Duvalier), Canadian and Quebecois interventions helped secure his release.

In a recent interview, Anglade told me a very poignant story of the time in daycare when she bragged to the other kids that her father had gone to prison. When the educator asked her not to tell that to the other kids, she asked, “Why? all of my father’s friends went to prison too!”

As a young teen, she returned to Haiti with her parents for several years as they helped the country turn the corner from dictatorship to democracy. Headstrong, she returned to Canada alone at age 17 to pursue her studies, despite her parents’ reticence. Her parents eventually moved back to Canada as well, but often returned to Haiti to contribute to its institutional rebuilding. When a devastating earthquake struck in 2010, both Anglade’s parents were tragically killed.

As part of the rebuilding, and her own healing, Anglade established Kanpé Foundation, together with musician Régine Chassagne, co-founder of Canadian group Arcade Fire, who is also a childhood friend. Kanpé aimed to help families in some of the poorest areas of Haiti learn to become financially independent.

Given that background, it came as a surprise when her first sojourn into partisan politics saw her being recruited by François Legault into his then fledgling CAQ in 2012. Anglade had already been identified by Quebec commentators and journalists as a rising star, and Legault proudly named her party president. At the outset, Legault, a former Parti Québécois minister, was staking out new turf, bringing together what he believed to be a coalition of Quebecers who yearned to go beyond the decades-old federalist/separatist divide in their province’s politics.  He had his work cut out for him, and the recruitment of Anglade was a major coup.

Anglade is an engineer and an MBA who’s held major positions in both industry at Procter and Gamble and Nortel, and in the consulting world with McKinsey & Co., since the start of her working life. She is fluent in five languages. Her business background made her an ideal candidate to push the CAQ’s themes of better management and the economy, but the relationship soon soured.

In the summer of 2013, Legault started testing anti-immigrant and anti-minority themes that would help him get elected in 2018. Those policies were jarring to many Quebecers, including Anglade. When, despite Anglade’s protests, Legault defended the right of the Quebec Soccer Federation to ban a Sikh boy who wore a turban from playing kids’ soccer, the writing was on the wall: “It was a tipping point,” she told me. “My parents would’ve turned in their graves.”

Legault soon began rolling out the beta version of what would become his discriminatory secularism law. At the end of the summer of 2013, Anglade announced that she would be quitting the CAQ and heading up Montréal International, an organization responsible for attracting talent and investment into the Greater Montreal area. It was a move that revealed both her inner strength and her moral fibre. She was not going to be used as a backdrop to Legault’s intolerant, populist policies.

In 2015, she decided to run for the governing Liberals in a by-election. The riding covered racially and linguistically mixed neighbourhoods in southwest Montreal, and encompassed elements of Montreal’s historic Irish and Black communities. She was easily elected to the Quebec National Assembly and quickly revealed herself to be as brilliant in matters of public policy as she was in political communication.

Premier Philippe Couillard made her a senior economic minister and named her his deputy premier. Her performance surpassed even her star billing. When the CAQ won the general election in 2018, Couillard announced he’d be stepping down. It was soon clear that Anglade was the runaway favourite to replace him. A wide array of MNAs from all backgrounds and a groundswell of support amongst Liberals across the province gave her a commanding lead.

As first-term MNA, and early Anglade supporter, Greg Kelley said, ”She likes to think and dream big and has the will and work ethic to make it happen.”

Liberals fretted that a one-person race was a sign of a party in decline. As one long-time party stalwart told me, they were afraid that without a race to force her to sharpen her policies and test her skills, they’d go through the same thing that had happened with Daniel Johnson Jr. who’d won unopposed in 1994, after the departure of Robert Bourassa. Despite his exceptional background, education and experience, Johnson was never able to connect with the average Quebecer and he eventually stepped down.

Senior Liberals began beating the bushes for a rival and settled on the relatively unknown mayor of Drummondville. Anglade was poised to win in a romp when the now former mayor took stock of the situation and withdrew, paving the way for Anglade’s coronation.

During her business career, Anglade met Helge Seetzen a German national who’d come to B.C. where he earned his Ph.D. in physics, and who has gone on to become a highly successful businessman in the field of tech. They met at a Halloween party in Vancouver, but, “I couldn’t see his face because of his costume!” She said. When she got back to Montreal he emailed her.

“It’s funny,” he wrote. “I think we’re going to get married and have children!” She flushed the email but he pursued a charming and ultimately successful long-distance courtship. She returned to see him again in Vancouver after making a deal with her sister to call the police if she didn’t hear from her for 24 hours. Anglade didn’t have to worry. Instead, she moved to Vancouver where they lived for three years. The couple, who now have three children 13 and under, now live in Montreal.

This very modern, very Canadian and very Québécois family will soon embark on one of the greatest adventures of their lifetime: the quest to lead Quebec into a new era. That, Anglade explained to me, is her key vision: “My dream is to bring together Quebecers of all backgrounds and to bring Quebec into the avant-garde socially, economically and environmentally.” Anglade has every chance of becoming the next premier of Quebec if she can make her vision shine through and win the hearts and minds of voters.

Quebecers often share a collective sense of pride over success and exceptional achievement among themselves. Anglade’s personal tragedies and triumphs, her brilliance and her generosity of spirit can deeply inspire.  The more Quebecers get to know of Anglade and her unique story, the more they will see that with her experience, expertise and personal values, she has all the makings of a premier for a new generation.