Economically disenfranchised men have fuelled Donald Trump. A similar situation could play out in Canada. 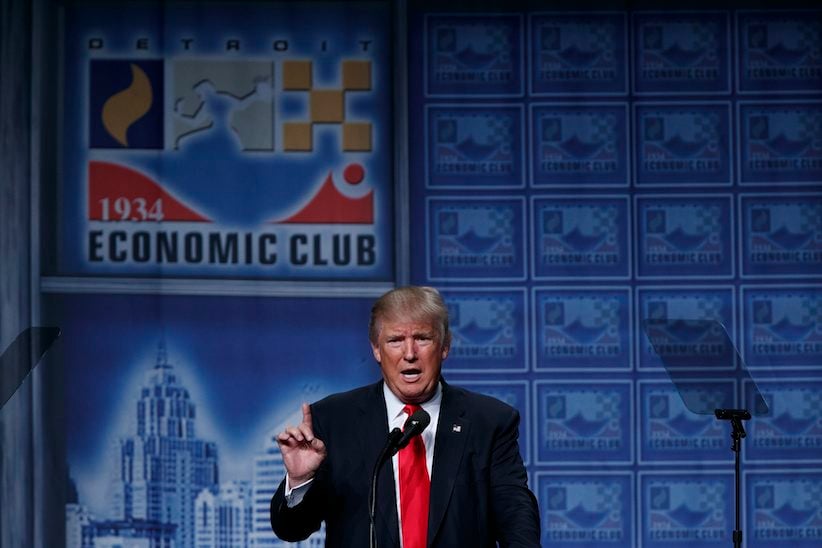 Every political movement has, at its core, an economic reason for being. The rise of Republican presidential nominee Donald Trump—and the threat this poses to free trade, immigration and the promotion of democracy worldwide—can thus be traced to a dramatic decline in job prospects among male American workers and the nativist sentiment this has inspired. With a similar trend on the march in Canada, is it time to start worrying about a northern version of Trumpism?

The growing sense of economic insecurity and political rage in the United States that has propelled Trump is most easily explained by the steady disappearance of men from the labour market. Since 1990 the share of American men aged 25 to 54 (those considered “prime working age”) participating in the workforce has fallen from 93 per cent to 88 per cent. The decline is twice as big among those with a high school education or less. In a report earlier this summer, the U.S. President’s Council of Economic Advisors said the “long-term trend is worrisome, since it indicates American men  . . .  are increasingly disconnected from the labour market.”

These people are not just out of work; they’ve given up looking for a job altogether. As such, they’re vulnerable to toxic messages of political and economic alienation. The U.S. drop in male labour participation rates can largely be traced to a decline in manufacturing and construction jobs, exacerbated by the Great Recession. The premium placed on ever-higher levels of education has caused further troubles for male workers attracted to traditional blue-collar jobs and who consider higher education a hardship. With their economic prospects neutered in this way, many have endowed their anger to Trump.

Here in Canada the situation is not quite as dire, but the trend line is heading in the same problematic direction. Since 1990, the labour participation rate for Canadian males age 25 to 54 with a high-school-or-less education has fallen from 90 to 84 per cent, with the decline accelerating sharply over the past decade. Among poorly educated Canadian men of prime working age, one in six have dropped out of the workforce—up from one in 10 a quarter-century ago. As the Conference Board of Canada points out in a recent economic update, the equivalent of the entire male population of Winnipeg has given up on work.

The reason Canada has managed to avoid the worst of Trump-like disaffection among male workers, according to Kristelle Audet, a senior economist at the Conference Board, lies in the resiliency of the Canadian construction industry, and in particular the housing market, which has provided a steady source of employment. “But,” she cautions, “there is obviously a lot of concern about the strength of housing going forward.” Chief among these concerns are recent government innovations that deliberately seek to dampen housing sales in Canada: notably a new housing tax in British Columbia, stiffer federal mortgage requirements and various provincial and municipal land use regulations. A collapse in the housing market engineered by such policies could do more than just blow off steam among housing speculators; it could blow up into an economic catastrophe for this vulnerable segment of the workforce. And unlike the U.S., where the rise of Trump has made them a politically urgent topic, the fate of young, poorly educated men has been largely ignored in Canada. “There is a lack of awareness on this issue,” says Audet in an interview. “We really need to understand this demographic better.”

Considering the fascination gender equity currently holds among Canadian policy-makers, surely young men deserve greater attention. Consider that last month, Statistics Canada reported on labour market participation for women, and the news was good on all fronts. Not only has the percentage of prime working-age women in the workforce risen steadily over the past several decades, but the trend line sharply deviates from U.S. experience. From 1997 to 2015 the overall participation rate for prime-age women rose by five percentage points in Canada while it fell three points in the U.S. Women now comprise 58 per cent of graduates from Canadian universities and colleges. The future, in other words, looks increasingly rosy for female workers. Perhaps it’s time to stop worrying about the share of women enrolled in university science and technology programs and start worrying about the overall dearth of young men in higher education of any kind.

If “because it’s 2015” was a suitable answer to last year’s question about the need for a 50/50 gender balance in the federal cabinet, what’s the answer to this year’s questions about the fate of unemployed young men? Our leaders should spare some thought for their plight—before it threatens our politics as it has in the U.S.