Donald Trump and Justin Trudeau: The empire of diminishing returns

Paul Wells: If these guys are so afraid of even the mildest retaliatory action, Canada and its serious allies should give Trump a response worth fearing 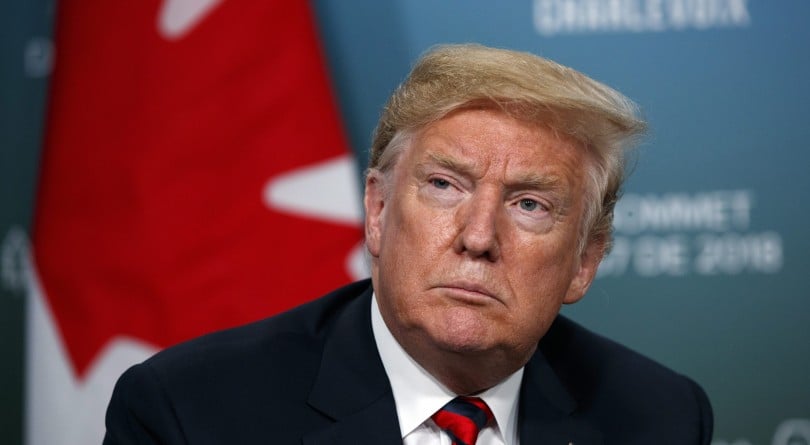 Welcome to your special place in hell, Canada. Here’s Peter Navarro, the head of the White House Economic Council (“Alarmingly ignorant about trade” — Forbes magazine) going off on Justin Trudeau after a Charlevoix G7 that threatened all weekend to go off the rails before, in the end, it obligingly went off the rails.

The hell bits and the stabby bits in Navarro’s weirdly well-rehearsed rant got the most coverage on Sunday, but I’m struck by:

(a) the way Navarro was plainly road-testing language that will surely wind up in presidential tweets before week’s end. “That’s what Bad Faith Justin Trudeau did with that stunt press conference,” Navarro said, referring to the utterly routine closing press conference every G7 host head of government has held since the first one in 1976. “That’s what Weak, Dishonest Justin Trudeau did,” Navarro continued. Who even talks like that? “That comes right from Air Force One,” Navarro said. Ah.

(b) this bit. “We’d have a great deal with NAFTA by now if the Canadians would spend more time at the bargaining table and less time lobbying Capital Hill and our press and state governments here. They are simply just not playing fair. Dishonest. Weak.”

There is no way to parse this statement and cling to even a thread of sanity. Talking to American politicians and journalists is unfair, dishonest and weak? It seems to me the only way to pop this little tirade back into the comprehensible universe is to assume Navarro means the opposite of each of his adjectives. Plainly the elaborate Canadian effort, now nearly two and a half years old, to explain shared Canadian and U.S. values and interests to any American who’ll listen has been fair, honest and strong — i.e., effective. And that’s what’s got Navarro in such a snit. The president spent a week being told by yes-men who were “alarmingly ignorant about trade” — Forbes magazine — that he could levy tariffs against America’s closest allies and it wouldn’t upset anyone. And for less than 36 hours he escaped the bubble and got told the opposite by people with sovereign power to follow through. No wonder they were testing Twitter language on Air Force One afterward.

It’s very hard to deal with somebody when everything they say is about something else. Trump’s steel and aluminum tariffs were supposed to be about national security. “This particular action on steel and aluminum, it’s not about unfair trade practices,” says Peter Navarro (“alarmingly ignorant about trade” — Forbes magazine) in this interview. “It’s about national security.” That was 11 days ago. Suddenly, as he wings his way from Charlevoix, Trump tweets that “our Tariffs are in response to his of 270% on dairy.”

That would be enough of a head-spinning reversal, except there’s reason to suspect Saturday’s Twitter tiff wasn’t even about dairy. Here’s Trump economic advisor Lawrence Kudlow (“Always-wrong pseudo-economist” — New York magazine) saying much the same stuff Navarro said in a near-simultaneous interview on another network (though it’s fun to note that Kudlow thought the G7 communiqué was “good,” while Navarro is pretty sure it’s “socialist.”

But here’s the key point. “Here’s the key point,” Kudlow says. It’s worth noting that up until he says this, nobody has breathed a word about North Korea. Kudlow introduces it. “The president is going to negotiate with Kim, of North Korea, in Singapore. It is a historic negotiation. And there is no way this president is not going to stand strong, number one, he’s not going to allow for other people to suddenly take pot shots at him hours before that summit.”

Which really makes it look as though this dispute isn’t about security or agriculture, it’s about macho posturing before another meeting. Two things are worth saying about that.

First, it’s kind of hard to imagine Kim Jong Un will be swayed one way or another in any decisions he might make about deploying versus destroying one of the world’s most unstable nuclear arsenals, let alone the fate of the Juche ideology and the Kim dynasty, by details of tone in a tariff dispute between Trump and his neighbours. You really have to be an all-star enabler to go on national television to endorse that kind of strategic thinking, so kudos to Kudlow for taking one for the team.

Second, if these guys are so afraid of even the mildest retaliatory response from the Canadians — such as “lobbying Capital Hill and our press and state governments,” let alone retaliatory tariffs that Navarro was sure nobody would levy — then Canada and its serious allies should give them a retaliatory response worth fearing. Trump and Navarro called Trudeau weak because they’ve awakened rudely to the sudden realization that he may not be. Let the awakening continue.