With his dog-whistle Skittles ad, Donald Trump is hoping the U.S. electorate can't taste the rainbow for the trees 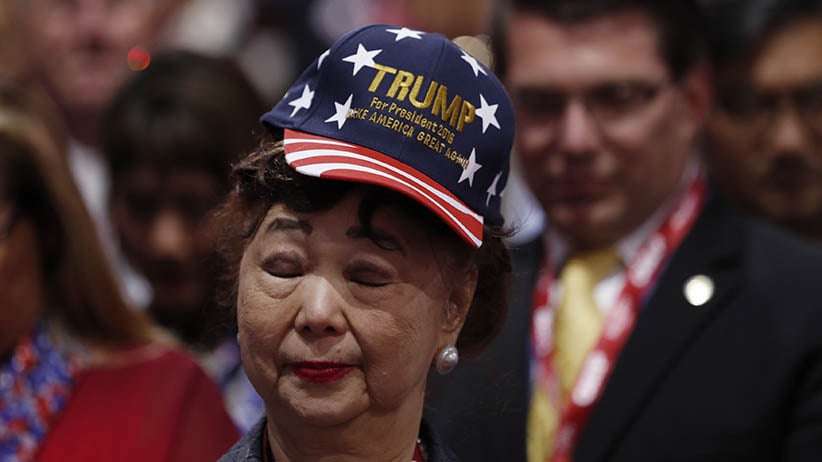 A delegate wears a “Trump for President 2016” hat during the third day of the Republican National Convention in Cleveland, Ohio, U.S. July 20, 2016. (Mark Kauzlarich/Reuters)

Are we just too politically correct to compare Syrian refugees to poisonous Skittles? Maybe when we look at the horrific picture of the bloodied five-year-old boy from Aleppo, Omran Daqneesh, we’re too PC to think of him as a dangerous little red candy. Not Donald Trump Jr., though. “If I had a bowl of Skittles and told you just three would kill you, would you take a handful? That’s our Syrian refugee problem,” he tweeted this week. “Let’s end the politically correct agenda that doesn’t put America first.”

Apparently the Mini-Me version of the Donald believes an insidious politically correct agenda has prevented us from properly appreciating the true threat posed by the Syrian crisis and its 4.8 million refugees. Is it also part of the politically correct agenda to point out that the U.S. has taken in just 10,000 Syrian refugees, all of them heavily screened, and that the average American has an exponentially higher chance of choking to death on a Skittle than being killed by a Syrian refugee terrorist? Probably. Luckily, Donald Trump’s great military adviser, retired Lt. Gen. Michael Flynn, clarified what’s at stake. “Political correctness kills,” he told Fox News. His face resembled the Doomsday clock ticking ever closer to America’s midnight. “It will cause death and we can’t have that.”

MORE: Trump supporters tell all about why he has their vote

There are actually no statistics available on “politically correct mortality rates,” but if the good general is right, it sure puts the naiveté of billionaire Bill Gates on full display. Gates was in Montreal last week to host his Global Fund’s Replenishment Conference and he raised $8 billion from countries around the world to fight HIV, TB and malaria. According to the World Health Organization, these diseases kill about 2.7 million a year and infect tens of millions more people. But it turns out that Gates and the rest of the world are going after the wrong threat. I looked on the Global Fund’s website and could not find a single dollar dedicated to the fight against politically correct thinking.

Here in Canada, Conservative candidate Kellie Leitch is paying attention to the deadly threat of politically correct thinking. She just sent out a letter to supporters defending the courage it takes to launch a debate about anti-Canadian values. “Together we will stand up to those who don’t want to discuss Canadian values and whose politically correct elitism remains tone deaf to the views of most Canadians,” she wrote.

Invoking politically correct elites is an old culture-war trigger deployed by Pat Buchanan back in 1992 at the Republican National Convention when he railed against—wait for it—the Clintons. He fought against things like gay rights and putting women in the military, fights he has long since lost and seem, today, incomprehensibly retrograde. But the battle to claim an ideal of a straight, white America is back, only this time with much greater political force and hair. Leitch has imported some of those code words, with, to be fair, a deep demagogue discount.

It has become all too common to dismiss Trump as a demagogue, a man preying on fear, not interested in detailed issues. But if that were the whole story, why don’t more people see through it? What are we missing? Maybe we are missing the obvious.

In 1999, two scientists, Daniel Simons and Christopher Chabris, conducted what has since become one of the world’s most famous experiments: the “Invisible Gorilla” test. They asked 228 people to watch a video of two groups of people passing a basketball back and forth. The goal was to count how many passes one team made to each other. Most viewers got the answer right, but then the scientists asked how many of them saw the huge gorilla walk through the video. Only half raised their hands. The other half missed it completely. What gorilla? They were so focused on counting passes they didn’t see the gorilla. The scientists called this “inattentional blindness.”

“Our minds don’t work the way we think they do,” Simons and Chabris wrote, in explaining how our brains get distracted by certain stimuli and literally create false memories. “We think we see ourselves and the world as they really are, but we’re actually missing a whole lot.” Their book, The Invisible Gorilla: And Other Ways Our Intuitions Deceive Us, examined why motorists hit cyclists they swear they didn’t see and why a police officer ignored a violent assault taking place in front of him. They literally don’t see the obvious.

Maybe inattentional blindness explains Trump. People are so busy following his daily outrageous statements and attacks they’re not seeing what he and his team are doing. For example, David Frum, a senior editor of The Atlantic, argues Trump Jr.’s Skittles tweet was a sinister repackaging of an anti-refugee tweet that used M&Ms. Trump Jr. substituted Skittles because that candy was a symbol in protests around the death of Trayvon Martin, an African American killed by George Zimmerman. Martin had no weapon, just a bag of Skittles he’d purchased before being killed. Was this a white supremacist dog whistle? Frum thinks so. Maybe we just don’t see it.

MORE: David Frum on the present and future of the GOP

Trump’s war on political correctness and the values debate look like the greatest mass psychological experiments in history. In Trump’s inattentional blindness test, however, we’re not counting basketball passes, but Skittles, all the while ignoring the giant gorilla that could take over a country.