Donald Trump gets close to sanity—physically, that is

Allen Abel: For a few fleeting moments, a composed and cerebral leader sat next to the president in the Oval Office. The contrast was striking. 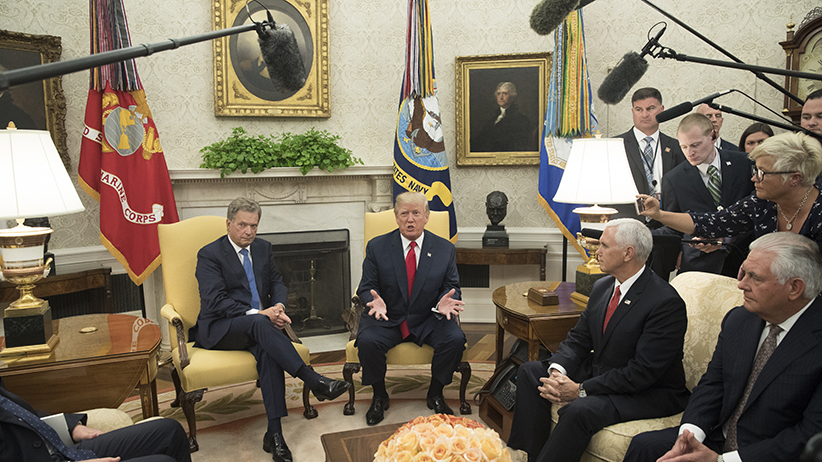 The president of the world’s most stable, successful, honest, livable, incorrupt, well-educated, library-book-borrowing, heavy-metal-loving, gender-equal, milk-drinking country spoke in the East Room of the White House on Monday, and so did Donald Trump.

On the eve of a journey with his rarely-seen-in-public wife to inundate Texas with photo-posing and aid from the same Federal Emergency Management Agency that he once pledged to eviscerate, the world’s pre-eminent Angry Bird turned a diplomatic speed-date and press conference with Finland’s Sauli Niinistö into a self-serving tirade against Mexican drug mules, the North American Free Trade Agreement, and—of course—the Clintons.

As Niinistö, a former finance minister, small-town police chief, and author of such books as Ordinary People at the Mercy of Great Events, stood as chill and stolid as a Lappland reindeer, Trump defended his pardon of Arizona sheriff Joe Arpaio—announced even as Harvey hammered Houston—by extracting from the pocket of his suitcoat a lengthy list of felonious blackguards who were liberated by the fiat of Bill Clinton and, later, Barack Obama.

“In the middle of a hurricane, even though it was a Friday evening, I assumed the ratings would be far higher than they would be normally,” Trump explaimed Monday, hailing the convicted lawman as a true patriot beloved by the (non-Hispanic) people of the Grand Canyon State.

(This boast came mere hours after the president re-tweeted Mother Teresa, of all people, and her famous declaration that “No color, no religion, no nationality should come between us, we are all children of God.”)

The Donald, sucking dry yet another news cycle even while floodwaters swamped a Texan metropolis with a population larger than all of Finland, and as Kim Jong-Un sky-hooked a missile over Hokkaido, was not asked about newly-published reports that his real-estate company actively pursued the erection of a Trump Tower in Moscow during the 2016 campaign. This cyclone, if proved true, would demolish the straw house of Trump’s protestations that “I have no business in Russia.”

With Congress still on its summer break—and with a total shutdown of the federal government looming in the absence of a new budget and an increase in the U.S. national debt, Trump is a solo act on the national stage this week. He and Melania will tour a relatively dry patch of Texas on Tuesday, then go to Missouri on Wednesday to mainline another dime bag of his base’s whooping adulation.

In a country besieged by opioid deaths and shattered families, Trump may be the only person immune to overdosing.

“The fake news keeps saying, ‘President Trump is isolated,’ ” Trump’s preternatural 2020 re-election campaign wrote to supporters Monday, drumming up donations from those households not currently as underwater as Metro Houston or The Donald’s approval ratings.

“GOOD! I don’t want them. All I ever want is the support and love from the AMERICAN PEOPLE who’ve been betrayed by a weak and self-serving political class.”

President Niinistö, with no skin in the NAFTA game, was reduced to a wallflower as Trump ran through his customary manifest of anti-Mexican imprecations—“They had a sweetheart deal for so many years … a tremendous crime problem—tremendous—one of the number two or three in the world”—and tossed a Mother Teresa northward —“Great respect for Canada, great love for Canada”—while still threatening to cease renegotiating and tear up the whole thing.

But the Finns have their own bugbear on their border, giving them a long, deep and pragmatic knowledge of Russia, born of centuries of propinquity, domination, and—exactly 100 years ago—escape from Russian hegemony. When Vladimir Putin rears his head, Sauli Niinistö feels his hot breath even before Sarah Palin does.

“A couple of weeks ago, I met President Putin,” President Niinistö wryly noted in the East Room, “and there were media interested in why Chinese navy is having training together with Russians in Baltic Sea area. Putin answered that it is not a bloc, it is not against anybody. My answer was that we are also training in Baltic Sea with United States and Sweden, and it’s not bloc, it’s not against anybody.”

“Mr. Trump, would you consider Russia as a security threat?” a Finnish journalist asked the American commander-in-chief.

“Well, I consider many countries as a security threat, unfortunately, when you look at what’s going on in the world today,” he demurred.

None of those countries, at least, is Finland, an active contributor of troops and treasure to the Afghan war, a heavily-militarized (for its size) bastion of Western values on the Baltic, and a frontrunner in nearly every recent global survey of living standards, learning and liquor consumption.

This was not lost on the American president as he welcomed the leader of one of the world’s sanest republics to his oblong inner sanctum.