Doug Ford and Alberta's Jason Kenney: Why they won't be friends

Ontario's new PC leader foresees a warm relationship with his Alberta counterpart. The feeling does not appear to be mutual. 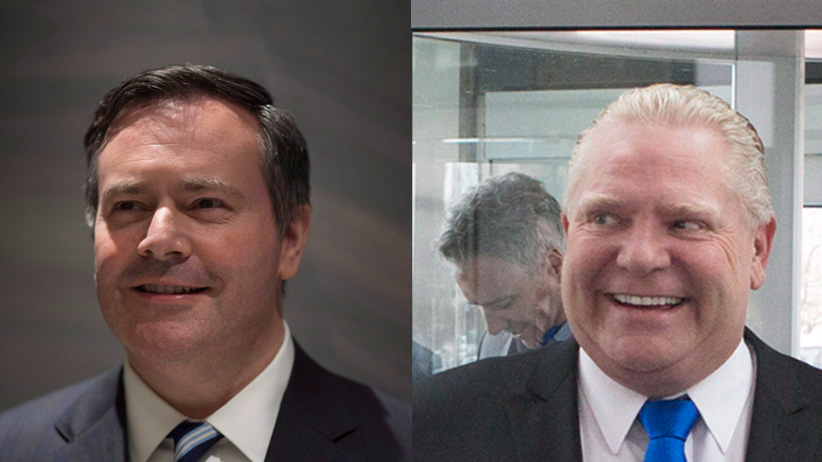 As much as Doug Ford talks about the good “folks” out there, there’s a special class of folks out there the new Ontario Progressive Conservative leader terms his “friends.” One he mentioned often on the leadership campaign trail was Jason Kenney, his fellow opposition leader in Alberta. They’d be especially friendly, he suggested, as they jointly fought the Trudeau government’s federal carbon tax: “I’d take (Trudeau) to the Supreme Court,” Ford mused during the final leadership debate, noting that he could do so “along with our friend Jason Kenney.” At the Manning Centre Conference last month he said, “I’m excited for my friend Jason Kenney to get elected; at least he’ll be on side with us.”

Kenney claims a lot of friends, too. Doug Ford isn’t one of them.

Alberta’s United Conservative Party leader flew out last weekend to Ontario as a keynote speaker at the Tories’ leadership event. He preached unity behind the winner, and expressed delight that whoever won would be opposed to carbon taxation. Kenney didn’t stick around the hall in Markham to find out who that was (in fairness, nobody was allowed to stick around). When Ford was finally announced as winner later that night, Kenney didn’t bother congratulating his peer on Twitter.

For most politicians, this could be chalked up as a no-big-deal oversight. But Kenney, in so many ways, isn’t most politicians. He tends to be methodical, diligent and a remarkably active social-media user and congratulator. If you’ve just won the Saskatchewan premiership, leadership of a rival Alberta party, a Paralympic medal or a new Parliament Hill TV hosting job, Jason Kenney will tweet out prompt props (more examples below).

Not so for Doug Ford. And if you can’t say anything nice…

It could well be a family issue. The last time Kenney was quick on the draw with a Ford-related matter, he was a federal minister in 2013 and expressed to reporters his disgust with Toronto’s then-mayor Rob Ford, who had recently admitted smoking crack:

I think Mr. Ford has brought dishonour to public office, the office of mayor and his city. I wished he had taken a leave of absence some time ago to go and deal with his personal problems, but not having done that I personally think he should step aside and stop dragging the city of Toronto through this terrible embarrassment. So, again, as a … I think there’s a dignity in public service and elected office and he is doing, regrettably, dishonour to that high office.

It’s not that Kenney would keep a distance from Ford simply because of his late brother’s misdeeds. Much as the would-be premier can take elbows-up and aggressive postures in politics, Kenney also has a disdain for coarseness and vulgarity—the “dignity in public service” part may be the most relevant part of the above quotation. He’ll sometimes rail against liberal academics and experts, yet seldom slams “elites” or the institutions themselves. Kenney’s okay with populism so long as it’s “happy or friendly” and “winsome,” as he put it in his own Manning conference speech.

While his NDP critics in Alberta may liken Kenney to Trump, the UCP leader has often deplored the U.S. president’s xenophobia and disparagement of anybody who crosses him—“I cannot think of a modern political personality whose approach and style I disagree with more,” Kenney told a radio host last fall. He also disdains politicians who cheapen the discourse to attempt easy, divisive wins, such as Kellie Leitch in the federal Conservative leadership campaign and her values test. “I really don’t think the Kellie Leitches of the world understood how to communicate, formulate a policy or communicate with any degree of subtlety or nuance,” he told Maclean’s recently. Kenney fancies himself an erudite, well-read scholar of institutional tradition and policy; he doesn’t expect others to ape him, but to at least reach a certain level of respect and dignity for political office. He has ordered his Alberta opposition colleagues to stop desk-thumping during question period, and improve decorum. Doug Ford’s smash-mouth style is at odds with what Kenney normally stands for.

RELATED: Is Doug Ford the populist hero Canadians are looking for?

Should they both wind up in office by next spring, Kenney and Ford may well find each other useful allies against Ottawa’s promise to impose carbon taxes if some provinces refuse. But don’t expect a “Doug and Jason” buddy show at a future premiers’ summit. When reached on Tuesday, Kenney’s office confirmed the two spoke in February about “working together” on a carbon tax fight but hadn’t yet chatted in the four days since Ford’s victory during the leadership weekend, which Kenney travelled to attend. They view the relationship more as “political acquaintance” than friend, a spokesman wrote; Kenney doesn’t know Ford that well.

Congrats, from your friend Jason Kenney

While he didn’t tweet any kudos for Doug Ford’s Ontario Tory leadership win, Kenney has recently taken to his preferred social-media app to congratulate:

CBC’s Rosemary Barton (for signing off from Power and Politics)

Vassy Kapelos (for becoming new host of Power and Politics)

Correction, March 17: A previous version of this story incorrectly suggested Doug Ford had referred to leadership rival Christine Elliott as “Crooked Christine.” The comments were in fact attributed to supporters on social media. We regret the error.