Jen Gerson: The new Ontario PC leader was the extreme choice, and his message will resonate with voters eager to tear down Liberal elitism 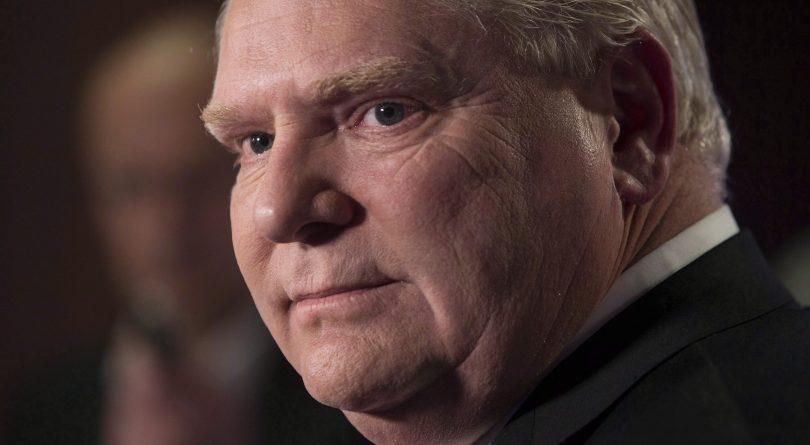 A fun philosophical nugget to consider when pondering the universe and everything in it is this: Anything that does not violate the laws of nature is possible.

This maxim applies to politics, too. The laws of political “nature” in a stable, prosperous, Westminster-based democracy are not so radical. But, right now, we are testing what can happen within our comparatively well-ordered little universe.

All politics now bends toward chaos. Rather than select the most predictable and reliable leader, voters have instead opted for results that would have existed within the extreme bounds of possibility only a few years ago.

From Brexit to Donald Trump; a vulnerable NDP-Green coalition in B.C.; even Prime Minister Justin Trudeau and Alberta premier Rachel Notley, voters are opting for the change candidate, no matter the qualifications, or the consequences.

What was the most unpredictable, chaotic possible choice between Christine Elliott, Caroline Mulroney, Tanya Granic Allen, and Doug Ford?

The answer: Doug Ford on the third ballot, backed by Granic Allen’s supporters.

This is an interesting question to apply to the coming Ontario election, because new PC leader Doug Ford is still that answer.

If we are going to borrow directly from chaos theory, it would be hard to ignore the vaguely Lorenz-like figure of this leadership race. Doug Ford is the natural heir to his brother, the late Rob Ford, who was the first to truly kick off this wave of burn-it-to-the-ground populism still sweeping first-world politics.

Who could have imagined that the younger brother—the crack-smoking Toronto mayor beloved by constituents and late-night-TV alike—would look comparatively benign in 2018. Now we have a truly outrageous say-anything overweight blonde man who complains about his treatment by the elite media. He runs the White House.

The Progressive Conservative caucus punted Patrick Brown on the grounds that his private life would demolish the party’s chances in the imminent election. It replaced him with a man whose opposition file is almost as thick and much more public. Amid the Rob Ford fracas, the Globe and Mail published a detailed report suggesting Doug Ford was a former drug dealer, for example.

In 2014, he told the father of an autistic child to “go to hell” after an ethics commissioner complaint ruled against him.

(Also, in hindsight, it’s difficult to consider how wrong someone like Caroline Mulroney was for this moment. A refreshing antidote to Patrick Brown, perhaps, but the daughter of former prime minister Brian Mulroney was the epitome of an elite, establishment candidate. During the brief campaign, Mulroney claimed she raised an astonishing $938,000—more than doubling Ford’s alleged take. Yet she came in third.)

Funny thing about populist movements is that they are often, at their core, ideologically hollow. Anti-elite movements oppose the prevailing power structures and mores of the day. Ford isn’t really a conservative, beyond a few well-placed catchphrases like “respect for taxpayers” and “stop the gravy train” and canning the carbon tax and comments about requiring parental consent when minors seek abortions, as a nod to social conservatives. It’s all chock-a-block focus-group feel-good stuff, especially refreshing and straightforward to voters exasperated and penny-pinched after 15 years of a Liberal government. But there is no broader coherence to any of it.

During the first debate Ford struggled to name a single program in the Ontario government he would cut. He kept on doubling back on his apparently stellar record slashing spending at Toronto City Hall. It was weak.

But Doug Ford is despised by the right people—the media, apoplectic lefties, partisan Liberals. That’s probably enough. The electorate is feeling overtaxed, angry and fearful at the speed of a social movement that, at its best, seeks to redress the historic grievances of women, people of colour and sexual minorities. But at its worst, comes off as illiberal, divisive and mobbish. There remains a deep skepticism about the motivations of a social justice movement that rejects “free speech” as a Nazi catchphrase and seeks the chastisement of white privilege as a paramount virtue.

Canada is not immune to the backlash against progressive values and perceived cultural and economic elites. To wit: the meteoric rise of Jordan Peterson.

Ford, the wealthy, grasping, boorish, parvenu businessman will forever be shunned by elites on both the country club right and the social justice left. That makes him perfect.

One should be careful, here, to note that Ford himself does not play the ugly notes. He enjoys wide support, especially in suburban and rural areas, and among immigrants and people of colour. Conservatives in this country long ago came to understand that they needed to court ethnic voters who share right-leaning values in order to attain power.

Ford is sticking to palatable, if simplistic positions; the Liberals are “corrupt” and wasteful. Get rid of the cap-and-trade system. Cut taxes. Increase spending on health care and education.

This narrow approach will serve him well.

But it’s more than what Doug Ford promises, it’s what he represents. The dynamic set to unfold in the coming election risks becoming extraordinarily nasty, if Ford is not careful.

And a woman, to boot.

Wynne is a threat to every regressive lizard-brain instinct. How easy it will be to slip a secret ballot against her in the night—and, by extension, every pro-equity, pro-diversity, intersectional anti-white male privilege mandatory training seminar she represents.

The perils of punditry in such an age being what they are, here’s the only prediction I have: former PC leader Patrick Brown’s problems would have torpedoed the party in the coming election. Doug Ford’s won’t.