Eat the rich (or at least their tax breaks)

Tom Mulcair and Justin Trudeau come upon the same complaint: the budget, they say, is a tax break for the rich 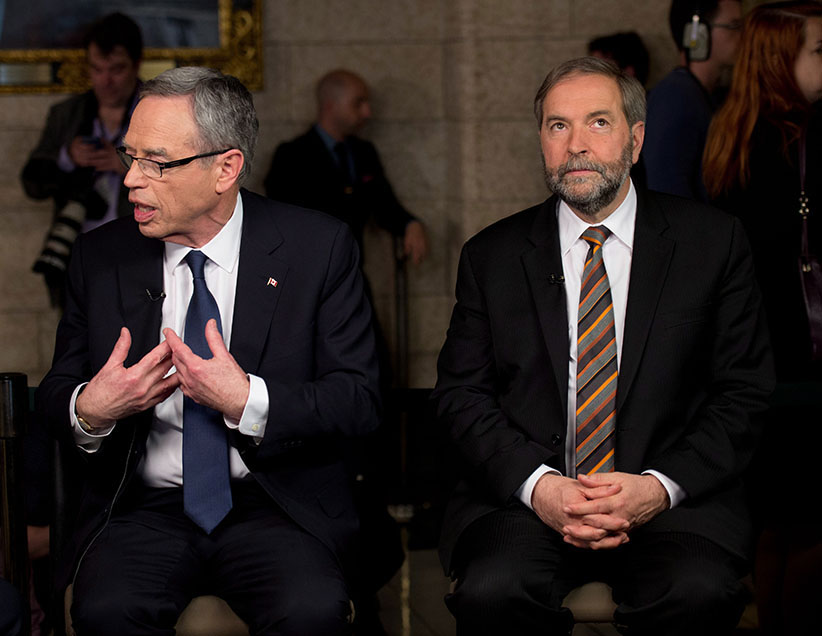 While Joe Oliver was preaching the good news to the Commons, Thomas Mulcair and Justin Trudeau slipped out. They presumably knew what he had to say anyway and for the sake of having their say there was a microphone awaiting them in the foyer and networks eager to broadcast their concerns.

First to the microphone, per his standing as leader of the official Opposition, was Mulcair. (Actually, for the record, he had been preceded to the microphone by the apparently eager Bloc Leader Mario Beaulieu, but at least Trudeau was willing to let the Opposition leader go before him.)

“Mr. Harper is stubbornly clinging to his view that the best thing for him to do in our society today, despite increasing inequality, is to help the wealthiest few at the expense of everyone else,” Mulcair explained before a question had been asked. “There is increasing inequality in our society and at this time, instead of helping the wealthiest 15 per cent, we should’ve been helping the middle class, helping all Canadians.”

The Liberal leader was more succinct, but the sentiment was the same.

“This budget helps those who need it least,” he said. “There’s nothing in here for the middle class and those looking to join it. And there’s no plan for jobs and growth. We will not be supporting this budget.”

So it was that Joe Oliver brought Thomas Mulcair and Justin Trudeau together. At least in rhetoric.

That the Liberals would not be supporting the budget hardly needed saying—since the Conservatives gained a majority in the House of Commons in 2011, budget day has been robbed of its will-the-government-survive-or-fall drama. And the permanent campaign that has subsumed our politics has so blurred the lines between electioneering and peacetime that it seems a bit silly to call this the start of the 2015 campaign. But with a federal election six months away, this was still something of a moment.

With their budget, the Conservatives have presumably set their platform for re-election. And if they have chosen their preferred frame, the New Democrats and Liberals now choose theirs. So both Mulcair and Trudeau wanted to talk about the rich. Specifically, the introduction of income-splitting and the doubling of Tax-Free Savings Accounts—the two policies that the New Democrats and Liberals oppose as tax breaks for the rich. Merely in English, Trudeau would get the phrase “need it least” on the record another four times, along with two uses of the word “wealthy” and another three utterances of the term “wealthiest.”

It sets up a fascinating debate—one about policy design and result, and perhaps even how we define wealth. It sounds a bit like the U.S. presidential campaign of 2012, when Mitt Romney unsuccessfully fought with similar complaints about his taxation plans.

There will be other points of complaint here. The government’s use of the contingency fund to balance the budget seems like an easy target (“It’s not something you tap into on budget day when you’re missing a couple of million dollars,” Mulcair said today, while Trudeau expressed a concern about the use of EI funds to show a balance). Provincial complaints will be forwarded along. Discrepancies, holes and details will be teased out (two years ago it took a bit for everyone to notice the tariff increases). And there is still a budget implementation bill, likely of significant length, to be tabled.

But the early wedge—perhaps the defining wedge—is relative affluence and comfort. The Conservatives will argue that their tax cuts benefit everyone, including the middle class. The New Democrats and Liberals will try to argue against the particulars. The New Democrats would replace income-splitting and TFSAs with things like child care and a new federal minimum wage. The Liberals would fill the same spot with measures to be announced.

Trudeau was asked whether he felt “handcuffed” insofar as the Conservatives have left a relatively small surplus for the Liberals and New Democrats to play with this fall. But the Liberal leader seemed to think the opening was large.

“On the contrary,” he said, “this government, by choosing to invest in help for those who need it least, by helping the wealthy with their budget, has left a lot of room for a better government to invest in help and support for the middle class and the kind of economic growth that is going to help all Canadians.”

Mulcair ventured that “this is a budget that will never be measured against the real world,” which is true insofar as we won’t know how the fiscal year has gone before we have to vote on the plan for it.

It is also rather subject to change. Indeed, the budget of 2015 is a budget to determine whether the Harper government gets to deliver another one. “We’re going to be looking for a mandate from the Canadian voting public this fall,” Mulcair said in closing, “to make sure that this is Stephen Harper’s 10th and last budget.”