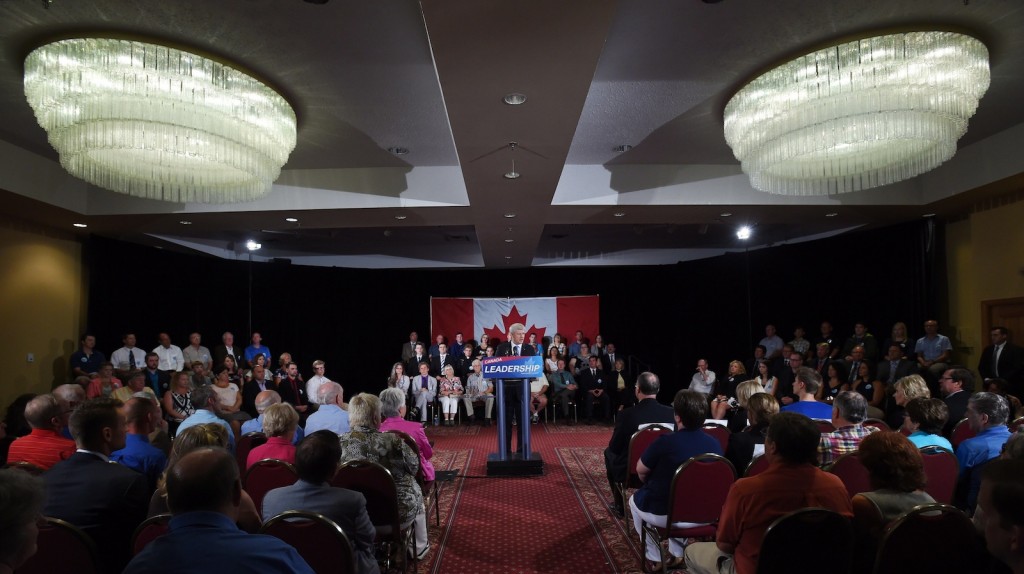 One day in April 2011, four weeks into that year’s federal election campaign, Stephen Harper was in Mississauga, Ont., for the day’s official announcement and, after that announcement, the CBC’s Terry Milewski took one of the four questions provided each day to the travelling press to ask a three-part query of the Prime Minister. Reporters are not officially allowed to ask follow-up questions of the PM during these availabilities, but Milewski was not entirely satisfied with one part of the response he received, so he attempted to shout a supplemental. The Conservative supporters who had been brought in to watch the announcement and fill out the camera frames then began to applaud, drowning out Milewski’s question. Eventually, the crowd stood to cheer and chant the Prime Minister’s surname.

Today, 2½ weeks into this year’s federal election campaign, Harper was in Etobicoke, Ont., for the day’s official announcement and, after that announcement, the members of the travelling press, as they have done repeatedly over the last few days, sought to ask him questions about the matter of suspended Sen. Mike Duffy. Some of those assembled to watch the announcement and fill out the camera frame audibly objected to the choice of questions.

“Ask questions about the topic at hand,” shouted one voice.

“What about seniors?” another person wondered aloud.

Afterward, a man, who responded “Go Stuff Yourself” when asked for his name, loudly conveyed to the travelling press that the Duffy affair should not be considered a matter of particular significance. “You’re a lying piece of s–t!” Mr. Go Stuff Yourself told a reporter from CTV. “And you, too!” he added to a reporter from the CBC.

All of this prompted a reporter from Reuters to note this morning that, in 2008, he had been advised to “Go back to Russia” at a Conservative campaign event. (Though perhaps that was merely an ironic reference to The Simpsons from a Conservative supporter with a decent sense of humour.)

(This wasn’t quite the first unscheduled outburst of the campaign. NDP Leader Thomas Mulcair’s book launch was interrupted by protesters last week.)

For the sake of general decency and proper etiquette, the sorts of collective notions that help us live with each other, we might all agree here that the heckling and insulting of members of the press should be limited to Twitter and the comments that appear underneath the items that journalists post online. But this is also about how politics is done.

As I believe Christopher Waddell, the journalism professor, noted this afternoon (I only caught parts of his interview with the CBC), situations such as the one this morning should probably be put in context. During official campaign periods, the Prime Minister has taken only to taking questions from reporters when he is surrounded by a room full of supportive partisans. I believe Liberal Leader Justin Trudeau has acted similarly on a couple of occasions during this campaign, and am not sure of Mulcair. And supportive partisans can be counted on to applaud every response. But if it’s inappropriate to heckle the questions, it might also be considered inappropriate to cheer the responses. For the sake of professionalism and an uncompromised environment, it might be insisted that news conferences (as distinct from partisan rallies) are held in nondescript rooms with blank walls. I suppose scenic backdrops might still be okay, if only because fresh air is equally good for everyone in attendance and most topographical features are non-partisan (with the obvious exceptions of Mount Trudeau and Lake Diefenbaker).

Meanwhile, the Conservatives have also been impressing upon their supporters that the members of the press are disposed to oppose the Conservative cause. A quick search of my inbox shows 17 emails from the Conservative party to its mailing list between June 2014 and last February that contain the phrases “media elite”, “Ottawa media” or “Ottawa media elite.” (I would have to count myself among the Ottawa media, but I’m not sure I qualify as “elite.”)

So that a reporter might be heckled is perhaps predictable, or at least foreseeable.

I suppose I should acknowledge that I know each of the journalists involved in the incidents noted above and that I have had cordial interactions with them and that I don’t think anyone should be subjected to insults or heckling when trying to go about their work (with the obvious exception of professional athletes), but that I don’t think any member of the press should be above or beyond public question or complaint.

Before reporters came upon the gentleman who thought the news coverage of the Duffy affair was out of proportion to its actual significance, the members of the travelling press had been speaking with another attendee (see the video here). This man was aggrieved with the Prime Minister. Specifically, he was concerned about help for seniors—perhaps this was the man who had earlier shouted the question about seniors?—and unsatisfied with Harper’s explanations for the Duffy affair.

Possibly, all those who would rather see the Prime Minister, or any party leader, asked different questions would be better satisfied if it were not only members of the Ottawa media elite who were able to question party leaders, but also members of the great unwashed. For the sake of everyone’s benefit, such questions could be asked and responded to in open forums that allowed for the proceedings to be broadcast.

For the politician, there would seem to be good and reasonable reasons for never submitting oneself to such a thing. The party leader should have access to relatively sophisticated polling and focus-group data that can help him or her understand what voters think better than any anecdotal interaction. Each party already has hundreds of candidates and volunteers who are knocking on doors and bothering people on their way to work and generally being in direct contact with the common man. Reporters, expert associations and political opponents already exist to hold a politician to account. And the prospect of a voter with a microphone and a chance to ask you a question in front of television cameras—the classic “town hall” setting—presents some kind of risk to one’s political fortunes. (Ask German Chancellor Angela Merkel what can happen in such a situation.)

Granted, the politician might benefit from the exchange, or even just the idea that he or she is willing to submit to such a thing. But I wonder how significant that potential benefit is. The travelling press, of course, could probably be counted on to dwell on any unfortunate moments, though perhaps the significance of any unflattering moment would be reduced, if exchanges with the public were a regular phenomenon. Michael Ignatieff derived no obvious benefit from his frequent town halls during the 2011 campaign—if anything, they only complicated his campaign’s ability to deliver a consistent “message”—and, while U.S. Sen. John McCain, circa 2000, built a campaign around town-hall events and the idea that he was an open, accessible and “straight-talking” politician, he was still trounced in the Republican primaries. Trudeau has participated in one town hall meeting so far during this campaign, but I’m not sure the act of doing so is necessarily going to boost his public standing, though it might implicitly reinforce the idea he wants to present of how he’d do politics. For an incumbent with more than nine years in office to answer for, I imagine the prospect would be even more fraught.

Of course, a party leader can also just meet with members of the public in private. But that’s no fun.

I imagine that, if you asked 1,000 voters whether they thought the Prime Minister and other party leaders should participate in open forums where they would take unscripted questions from members of the public, some majority would say yes. But, among those 500 or more voters, there probably wouldn’t be more than three who would actually have that as a primary consideration when casting a ballot. That’s democracy. Beyond the complicated math of multi-party elections, a country’s politics is a product of collective willingness and demand.

But practicalities can also just be pushed aside to wonder about how things could, or should, be.

I have previously sighed wistfully about Lester B. Pearson’s decision to launch his campaign for a new flag with a speech to a hostile crowd in 1964. It’s possible that Pearson calculated that he stood to gain from staring down such a reaction. But, even still, as I wrote in February, it seems unlikely that any politician would attempt to do such a thing now.

The modern campaign is mostly a series of basically stage-managed events. (In the case of the incumbent Prime Minister, attendance is by invitation only.) And that works so far as contributing to a coherent system of partisan politics. But would it be of some benefit if political leaders were not almost only ever seen speaking to friendly crowds, members of the press or each other? Would that change the style or focus of national discussion? Would it fulfill some principle of how democracy is supposed to work? Would it be a better democracy? Would it be a more real kind of democracy? Or would it just be a different kind of spectacle?

I ask such questions with earnest intent, but you are, of course, welcome to suggest that I stick to the actual issues at hand or, as it were, go back to Russia.