Elizabeth May is here to stay 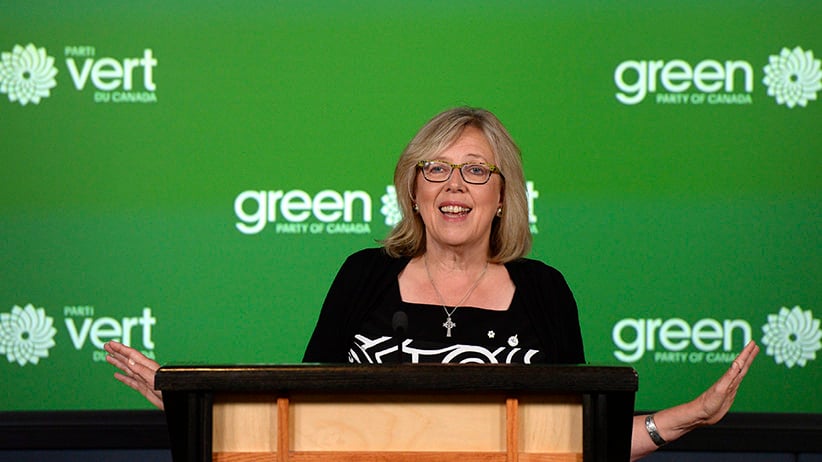 What could the Green leader possibly have to say that was important enough to call a press conference on Monday morning? Would she resign as leader, leave the Green party, and sit as an Independent? Cross the floor to the Liberals? Would she resign as leader, and force a leadership convention that would put the controversial Boycott, Divestment and Sanctions against Israel issue back on the table?

It was more speculation after two weeks of speculating. May was upset (“pretty devastated,” she had told Maclean’s) over the party voting to include support for a boycott against Israel in its policy at the Green convention in early August. It was a move May opposed wholeheartedly.

But few people had speculated that May would hold a press conference to announce she’d be staying on as leader of the party. After a 10-day trip to her family’s home in Cape Breton, N.S., May told reporters she returned this weekend unsure of whether she would stay on as leader, or step down. But after a meeting with Federal Council on Sunday night, and after reading through emails of support from Green party members and other politicians, May decided to stay.

More: Elizabeth May to remain as Green Party leader

Here’s what else she had to say about her decision.

“I see there’s been lots of speculation in my absence from Internet about whether I plan to join some other political party,” May said. “That was never even a consideration.” She joked that reading the media commentary in her absence made her feel like Tom Sawyer, attending her own funeral.

In an interview earlier this month, May told the Globe and Mail she doesn’t love the job, but on Monday, she said she loved the Green party’s grassroots engagement, and that “the leader of the party is not the boss.”

Though tempted to step down as leader and remain with the party in order to trigger another convention, May ultimately decided to stay on largely because remaining as leader adds weight to her position on a parliamentary Special Committee on Electoral Reform. “I don’t know that I could do anything else to be more effective on the issues that matter than by staying on as leader of the Green party.”

May said her party’s federal council “overwhelmingly” wants her to remain leader, not to mention the people she ran into at the airport on her way back to Ottawa and the campers at her brother’s campground in Cape Breton. Not to say stepping down is completely off the table. “I think the greater likelihood is that I will lead the Green Party of Canada in the 2019 election,” she said. “But I’m more than comfortable with the idea that I might not.”

The Green Party will hold a “special meeting”

May said federal council passed a series of motions that not only give her its full support, but maps a path to improve the party’s policy-making process. Over the next few months, the Green party will hold a special meeting to address issues that arose following the convention.

Related: Here’s what happened at the Green convention

Before this year’s convention, the party decided it no longer needed to send policy proposals back to members across Canada for an online ratification vote. This was problematic, May said, because that meant only members who could afford the plane ticket and hotel room voted on resolutions.

Also, for the first time, the Green party followed Robert’s Rules of Order at the convention—a process for conducting meetings in an organized and deliberate way. However, those rules leave little room or time for consensus-based decision making. “Like first-past-the-post, in my experience Robert’s Rules of Order is fast, efficient, and leads to bad decisions,” she said.

For these reasons, the special meeting will review any decisions made at the convention that lacked consensus—not only the contentious Boycott, Divestment and Sanctions motion—and subject them to some sort of consensus process.

She’s focusing all of her energy on electoral reform

But May’s attention will not be focused on this special meeting. From now until Dec. 1, she said 100 per cent of her energy will be dedicated to the Special Committee on Electoral Reform. (“And of course,” she added, “whenever I can, pushing the Trudeau administration to get rid of Stephen Harper’s old, dated carbon target and have a plan that actually gets us to what we committed to in Paris.”)

Related: On electoral reform, what are Canada’s options?

Over the next three months, May and 11 other MPs will be touring every province and territory, hearing testimony from voters on electoral reform. They’ll then present recommendations to the Liberal government on how it can keep its campaign promise that 2015 would be the last election in Canada under the first-past-the-post system.

While May is confident the committee and the five parties involved will come to a consensus on what that change looks like, she said she will hold Trudeau to his promise, even if the committee can’t come to an agreement. She said three or four parties agreeing would be substantial consensus—but she suggested even two parties agreeing might be enough.

May said it’s “absolutely not the case” that there is an anti-Semitic faction within the Green party. “I will never demonize the people in that movement,” she said, adding there are well-meaning groups that support it. “But it shouldn’t include a federal political party that’s serious and wants to elect more MPs in the next election.”

May said she was heartbroken, not because the Boycott, Divestment and Sanctions motion itself had passed, but because the Green party had abandoned its usual consensus-based approach and allowed division on the convention floor. She said she was confident, that given the time, those who supported the motion and those who opposed it would have come to a consensus.