English-language debate: What each leader must do

Andrew MacDougall: From Erin O'Toole deflecting attacks on gun safety to Annamie Paul saving the furniture, each leader has a list of must-dos in Thursday's showdown 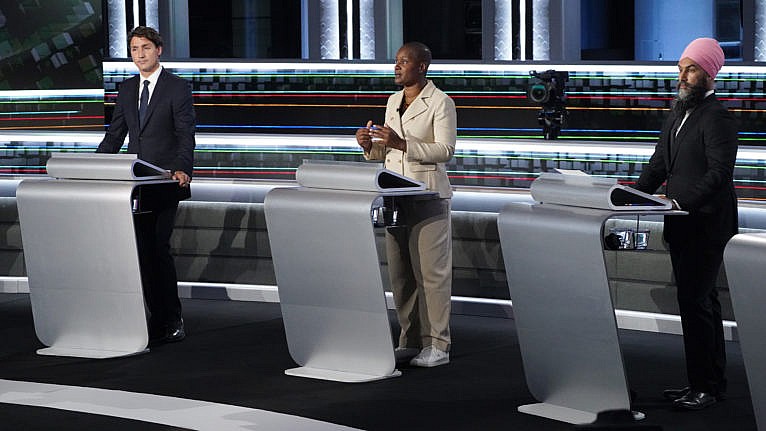 The impact of political debates in campaigns is, to some, overrated. Well, just ask Erin O’Toole if his answer on assault weapons in the French-language TVA leaders’ debate last week had an impact. The fact we’ve been talking about guns for much of the intervening period suggests they do matter.

But some debates matter more. Which is why tonight’s English-language debate—the first of this campaign, a day before advance polls open and just 11 days before Canadians vote en masse—matters a lot. With the polls showing a deadlock at the top, tonight’s debate offers the best chance for leaders to cut through and make their case.

The biggest barrier to clear communication to Canadians might be the format of tonight’s debate: there are five moderators to go with the five party leaders, meaning each leader will have precious few minutes to speak, and little chance to speak beyond a soundbite. If last night’s French version is any indication, tonight will be a bit of a dog’s breakfast.

So, what does each leader need to accomplish? What do they need to say? Let’s have a think.

Trudeau has to rally wary progressives back into Camp Liberal and re-energize his base, who must be pretty darn disappointed with how the election ‘campaign’ has gone to date.

By tearing the NDP’s climate “plan” apart and encouraging progressives to rally behind the best plan in Canada for tackling climate change.

Once the NDP climate plan has been appropriately savaged, Trudeau will then withdraw the hidden AR-15 strapped to his back, point it at the camera, and say: ‘Erin O’Toole wants you to meet this bad boy on the streets of Canada’.

Desired clip (other than the above AR-15 line, natch)

“Mr. O’Toole will take us back and Mr. Singh doesn’t have a climate plan to move us forward. Only a Liberal government has a plan to meet our challenges and move everyone* forward as we emerge from the pandemic.”

Lots. Reach out and reassure suburban voters (particularly in Ontario) who are struggling with the cost-of-living and housing prices, but are wary of some elements of his party. Draw the Quebec nationalists into his camp and stop any rightward drift to Maxime Bernier’s People’s Party of Canada.

By talking up job creation, his housing plan, worker-friendly policies and desire to reduce household bills, particularly telco bills. Portray his party as the party that keeps its word and delivers the goods.

O’Toole must also centre any gun discussion on urban gun crime (which worries the suburban cohort) and not on Trudeau’s list of newly-banned guns used by law-abiding sport shooters and hunters (which have been used in some of Canada’s very rare mass shootings).

“Mr. Trudeau called this unnecessary election in the midst of a deadly pandemic out of political opportunism. But this campaign has shown that it’s time for change. Only the Conservatives have a plan to make your life more affordable.”

Convey purpose and momentum so his supporters don’t get weak-kneed and fall into the trap of once-again voting for Trudeau and his Liberals out of fear. The fact the polls indicate another minority Parliament should help Singh make the case for the NDP to once again be the balance of power.

By positioning Trudeau as a centrist in socialist clothes, a man whose actions often drop well short of his soaring rhetoric.

Singh will also cast himself as the fundamentally decent option in order to capitalize on Trudeau’s forced switch during the campaign into an angrier, more divisive leader decrying the shouting mobs of anti-vaxxers.

“Canadians have received the help they’ve needed during this pandemic because the NDP was there to keep Mr. Trudeau honest. A vote for the NDP is a vote to keep our country going in the right direction.”

The usual Bloc-ery: portray the Canadian nationalists in Parliament as antithetical to Québec’s needs. He’ll try to paint Trudeau and O’Toole as offside with his province’s culture, with a particular focus on O’Toole, who will be looking to challenge Bloc incumbents in and around Quebec City and Montreal.

The wily Gilles Duceppe was the master of stirring the pot in English debates. Blanchet isn’t Duceppe, but there’s no incentive for him to be constructive or reasonable in his second language. Expect him to lob grenades, from Bill 21 to the Montreal school board’s decision to deny Quebec’s nationhood, as recognized by Parliament in 2006. Don’t expect him to gaffe again and open up an avenue for Trudeau’s “I’m a Quebecker too” riposte from Wednesday night’s debate.

“Only the Bloc Québécois can defend Québec’s interests, whether against Mr. O’Toole and his oil companies, or Mr. Trudeau’s woke, power-grabbing bureaucrats.”

What does she need to do?

What doesn’t Paul need to do? The federal Green Party is in meltdown, with the problem very much coming from within the house. These debates will be the first time many Canadians have seen Paul but things are too far gone for her to make an impact in the race. That said, Paul needs to grab this opportunity to reclaim her dignity and keep the internal wolves at bay.

How will she do it?

By speaking instead of being spoken for. Paul impressed during the leadership race and those qualities are still there, presumably, and ready for their star turn. And with climate change being an issue, the Green Party ought to have some words to interest Canadians.

“First, I’ll put out the dumpster fire in my party and then I’ll extinguish the planetary emergency.”
Or, more realistically:

“Canada needs a voice that sees everything through the prism of climate change, not just parties who play to the issue when it’s popular. We’re running out of time and we need more action on climate, and faster.”