Femen and the theory of toplessness as protest 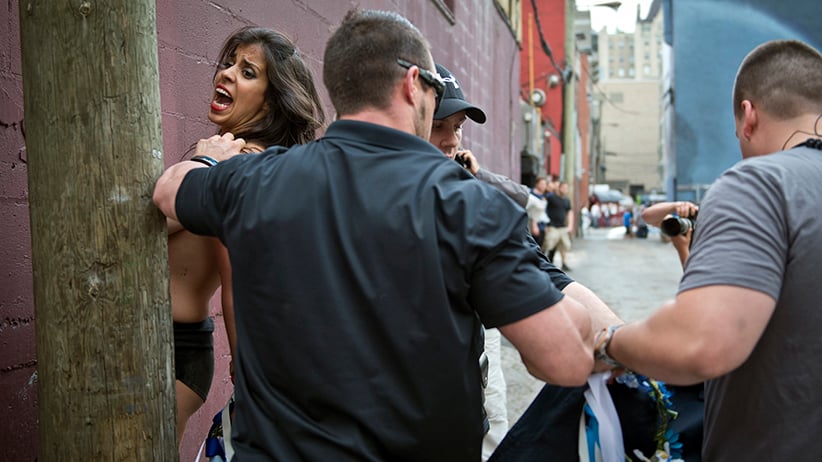 The Femen movement originated in Ukraine. In June 2014, the group protested at the Grand Prix in Montreal. (Joel LeMay, QMI)

Neda Topaloski briefly interrupted the business of the House of Commons yesterday—forever entered into history as “[disturbance in gallery]“—when she yelled out from the visitors’ gallery with her objections to Bill C-51, the government’s anti-terrorism legislation. Protests in the galleries are an occasional occurrence, but Topaloski’s was widely noted for its topless nature—Topaloski not only shouted, but bared her chest, on which was written “C-51: State Terrorism.” “It’s really scary to see that our system is using a real threat of terrorism that does exist in society currently to justify and excuse its totalitarian methods of repression,” she says of a bill that she considers a threat to freedom of speech.

Topaloski is a member of Femen, a movement that originated in Ukraine, which uses female nudity to protest various causes. (Its leader was recently speaking at a Copenhagen café when the café was attacked by a gunman.) A Quebec chapter was launched in 2012 and has since staged protests at Quebec’s National Assembly, campaign events during the last provincial election and Parliament Hill.

Topaloski herself has participated in protests during a Right to Life rally on Parliament Hill and at the Montreal Grand Prix. She says that among 20 supporters of Femen Quebec, there are about six women who typically go topless for the public protests. “We think one woman can change the world,” she says.

I spoke with Topaloski today and the following is an edited and condensed version of that conversation.

Q. How many times have you personally done these protests now?

A. It’s been a year and a half that I’ve been in the movement. And, personally, I would say maybe six times or something like that … We had two actions [at the Grand Prix]. And before that I was at the Palais des congrès in Montreal, during Stephen Harper’s visit, to protest for indigenous women’s rights, for murdered and missing indigenous women, and then a few other ones, once in New York with Femen leader Inna Shevchenko.

Q. What inspired you to get involved?

A. We are always objectified, of course, and women’s bodies are used all the time to sell a million things and represented in a way that is always sexualized, and this movement really illustrates how a woman can take back her subjectivity and her body from the patriarchy and make it once again, as it always was and should be, her own thing and her own body in which she speaks for only herself rather than letting other people speak through her body to sell their products and things and ideas. So that’s what inspired me. It seemed like the proper response, and, most of all, it uses the same imagery. The fact that we protest with our bodies and write things on ourselves and people still tell us that they still see us in sexualized ways and they tell us it’s our fault, you know, women are objectified, so how, by using your body, can you be an answer to that? It just shows to what extent we only have one way of seeing women, so it seemed quite a proper answer. In one picture it plays with the codes that we are used to. And I just found it extraordinary. And I’d never seen women, young women, who scream so much and who never stop and who are not scared of the system. I have never seen that. So all of that seemed very visceral and very on point.

Q. Had you been involved with protest movements before this?

A. No, not specifically. I was always militant as a student and I went to protests, but nothing too extravagant.

Q. Nothing quite on this level I take it?

A. No, exactly. When you go to a protest and there are 3,000 people or 20,000 people outside, it’s different than doing something on your own, exposed to all sorts of critics and exposing your body and being heard through your body—it’s different. It takes another kind of personal investment.

Q. Is it scary to do that, to expose yourself like that?

A. Well, no. No, it’s not. Because when you look at it, everybody’s taking it so seriously, but when you really look at it… it’s absolutely non-violent and it just plays with the codes and at the most, it’s funny, you know? How dare she do that? Why is she there? Why is it written on her? It’s really funny to see people’s reactions, and when people’s reactions are extremely violent, that’s when you realize to what extent there’s unjustified [anger toward] of women who try to be liberated. Last year, there was an old lady who tried to beat us up with an umbrella at the anti-abortion protest. Some people really perceive it as something crazy when actually it’s just a two-minute protest with a girl who speaks for herself. So I’m not scared. There’s nothing to be scared about. I’m just me. I’ve always been me and I’m just shocked and surprised whenever I see that being me can cause such tremendous questioning.

Q. Do you ever worry that the style of protest will overshadow what you’re protesting?

A. No, and the very fact that people ask this question shows again that… This is so ironic, we try to talk about issues, and people talk about our breasts all the time. And then people ask us, “Well, why do we talk only about your breasts?” Well, it’s up to you to talk about something else, you know. There’s nothing wrong or special with our breasts, and there’s nothing weird about that either. It’s not my fault that they have only been used to sell products. Now I’m guilty for giving my message and speaking for myself? No. Femen started as a protest movement that protested with our clothes on. And then nobody listens to women, nobody listens to women’s protests, it’s always marginal, it’s not really society, it’s just women. At some point, you realize there’s only one thing that the system and patriarchy is interested in: women’s bodies. You see it all around, so we decided to use that, but speak for ourselves and take back our bodies and identities and make them subjects, not objects.