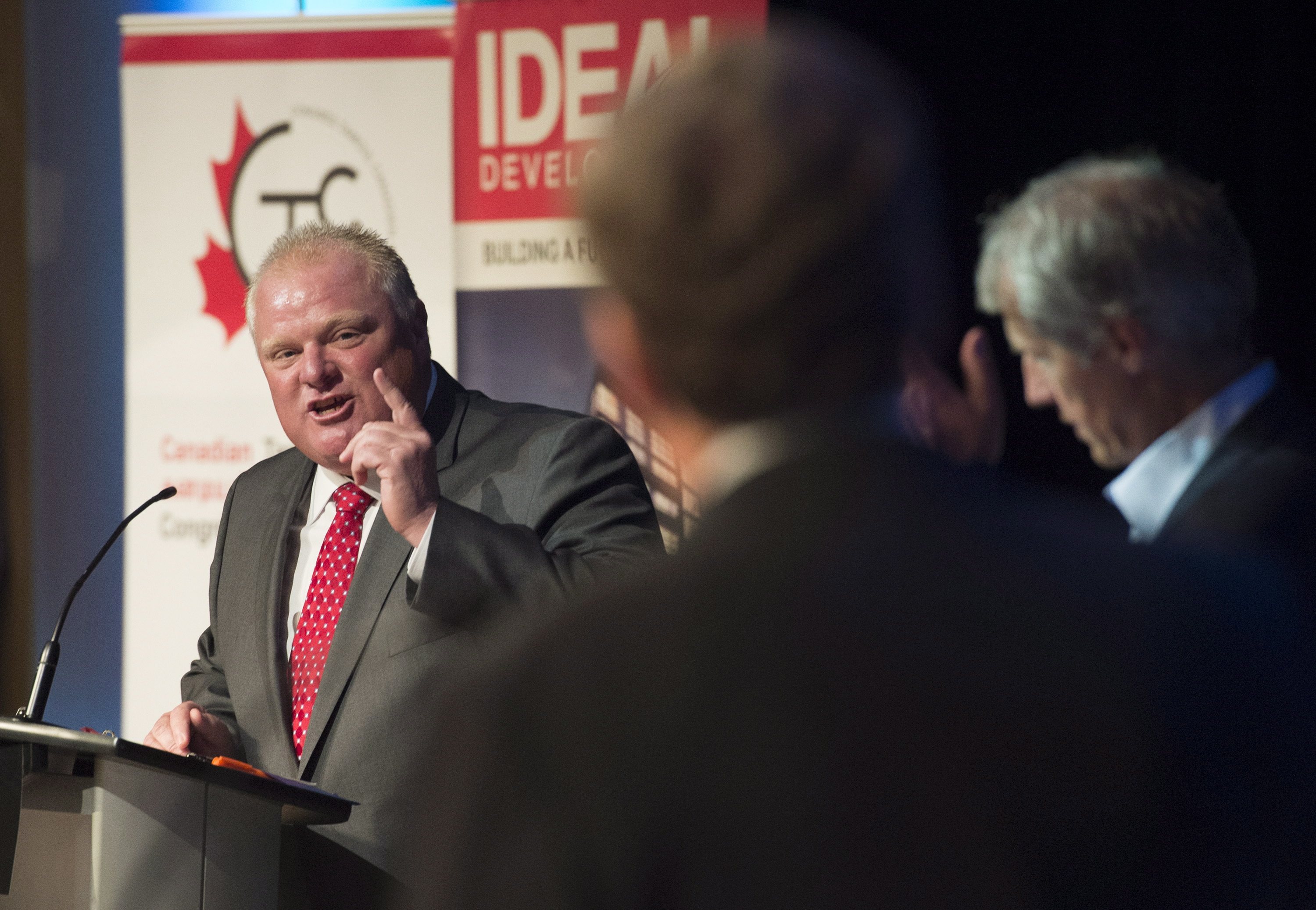 We’re still eons, really, from Toronto’s election day on Oct. 27. So what made this debate special? It’s only the second to feature all five of the major candidates, and the debate—put on by the Canadian Tamil Congress in Scarborough—is late enough in the campaign that the candidates have had time to firm up their talking points and identities.

Oh, and this was the first debate featuring a certain notorious mayor since his return from rehab.

1. ROB FORD’S RETURN. Yes, it was Rob Ford’s first debate since his campaign cessation, but if you believed that this debate would centre around his drug use, alcoholism, and recovery—beyond Olivia Chow’s immediate riposte calling for the crowd to “fire Rob Ford,” and the occasional light jab here and there—you would be wrong. Instead, viewers saw a pretty standard Ford stump speech and, because Scarborough is something of a Ford Nation suburb—the mayor promised a subway for Scarborough, and he’s managed to rustle up the votes for a controversial plan to bring one there—there was home-court advantage in play.

In fact, over the course of the night, he was hailed equally as conquering hero and corrupt villain, and because he arrived late for the debate, he was able to march onstage alone to a storm of pent-up cheers. The questions from the crowd, too, were alley-oops for the mayor (“What budget lines would you cut?” “How will you ensure responsible councillor spending?”) and, if anything, the softballs helped him to deliver a more confident version of his standard (and questionably accurate) mantra of savings and promises kept. Unemployment is down! (It’s an old number, and comes as a result of a program from an old administration.) There are more cranes in the sky, and cranes mean jobs! (Construction jobs are temporary and unsustainable.) I’ve saved $750 million! (No.) “The proof’s in the pudding,” said Ford, butchering the full idiom. “I have saved the taxpayers hundreds of millions of dollars. I have been honest with people about subways.” It’s hard to get a real sense of how much this moved the needle for your average voter—of course, Ford’s main problem that he has little room for growth in support—but it’s worth noting the final words of his closing remarks: “I love you, Scarborough,” as if a rock star. He didn’t lose the debate, nor did he win, but the impact on his support? Likely nil.

2. DAVID SOKNACKI’S GUMPTION. It was a pro-Ford crowd to be sure, but Soknacki benefited from his Scarborough bona fides: He lives here and represented the area as a councillor from 1994 to 2006. Maybe it was his comfort in the area, but, despite the reputation that clings to him still—that he’s smart but charmless—he showed surprising fire and bombast. Immediately, in his opening remarks, he said straight-up that he was for LRTs—a curse word in Scarborough—and he earned vitriolic boos for his effort.

But he was not cowed; he would repeat his plan for LRTs in Scarborough throughout the night, reasoning that they’re significantly cheaper and just as fast as subways and, by the halfway point in the night, there were few boos left in the crowd. He called Ford out on his persistent, impetuous (and repeatedly disproven) claim that he’s saved taxpayers $750 million; he even dared to suggest that in looking for efficiencies, we should closely examine that politically sacred cow: the police budget. He offered hard truths paired with aw-shucks “for heavens’ sakes”: “Nobody wants to talk about tax for transit. Where on earth are we going to find the dollars?” He even ended the evening by bringing up a plan for parks, to cover the many issues that weren’t touched on during the streamlined debate. Soknacki had little to lose in this debate, and he came ready to play.

3. KAREN STINTZ’S TALKING POINTS. Opening remarks? Here are some potshots at all the candidates. How do we fix transit? Congestion, Stintz said, can really put a kink in your day. Oh, a question about jobs? Here are some more thoughts on congestion. What say you to the land transfer tax? Allow me to deflect by reminding people that their money is hard-earned, and that they should trust me. And have I mentioned my opinion about congestion?

Throughout the night, Stintz was halting and awkward, employing rhetorical questions to the crowd (“Who can you trust?”), which only backfired when supporters of the mayor loudly spat back “Ford!” When she ended two of her answers with the quickly mumbled line “Karen Stintz for mayor,” it came off as a hastily thrown-together, shlocky commercial. This is a campaign that has so far failed to move the needle, and didn’t do itself any favours with a performance that was the worst of the night.

4. JOHN TORY’S HOPE-AND-CHANGE PLATFORM? The storyline going into the debate for Tory was whether his transit plan was as popular as a Nanos poll claimed. (It allegedly vaulted him to first place among those who see transit as the most important issue in the city.) The response to the planks he rattled off on Tuesday night—it is in favour of surface rail, which is basically a subway but has the disadvantage of not being called such—was curiously lukewarm. But while he was confident and quick most of the night, his story this evening was dominated by this fascinating line that shifted his narrative: “Who has the experience delivering results? I don’t think that can come from a career politician.”

Despite all the options readily available, was this possibly the richest statement of the night? Okay, ignore for a minute that Tory was the leader of the opposition in Ontario for five years and that he was involved in the election campaigns for prime ministers Joe Clark and Brian Mulroney, and premiers Bill Davis and Mike Harris; ignore for a second that he actually joined the Ontario Young Progressive Conservative Association in 1969; ignore if you will that he ran for mayor back in 2003 . . . never mind. Those are too many obvious political associations for us to ignore. And yet, on multiple occasions, Tory was allowed to make himself into an outsider, a maverick, someone who doesn’t operate in the system and can effect change. “I am all about hope,” he said to close off his night. Tory, presenting himself as a crusading Obama figure to rescue a broken political system? Only, apparently, in Toronto.

5. OLIVIA CHOW’S CONCERNS. Nearly all polls showed Olivia Chow leading, and it appears clear she enjoys significant downtown support. But her biggest question mark has been whether or not she can win the suburbs, the key demographic in Ford’s 2010 victory. She certainly did not swat away the concerns with an assured performance.

Chow came out firing, pun intended, against Rob Ford: “Join me in firing him,” she said in her opening remarks; “fire him for failure.” On its own, that’s not entirely surprising: it was her radio commercials that were the splashiest rebuke of the mayor upon his return from rehab. (It’s worth saying, too, that Chow can only slam Ford to a point: She needs him to remain in the race so as to siphon votes away from John Tory, which is why she has not called for his resignation.) What is surprising is that she led the pack in comments about Ford, which had the unintended effect of making her seem petty. While the other candidates actually discussed broad-strokes policy, Chow kept attacking the mayor: “Rob Ford is a terrible role model for our children,” she began in her closing remarks, which drew marked booing from the crowd. It felt like a poor decision.

In the interim, one thing seems to resonate for Chow’s campaign: her messaging on youth unemployment. While it’s unclear how much impact any mayor can have on employment—without meaningful tax revenue beyond property tax, mayors cannot provide major new investments, and it’s the same reason Ford’s crowing about more jobs feels ill-gotten—it earned her the loudest cheers of the night. But when her efforts at sound-bite snappiness are attacks on Ford and not about policy measures, she fails to garner new support, too—and perhaps even risks alienating her core supporters, who know they’re not voting for Ford, and want that circus to leave town, unmentioned again.