Audits are expensive and aircraft policies are unclear 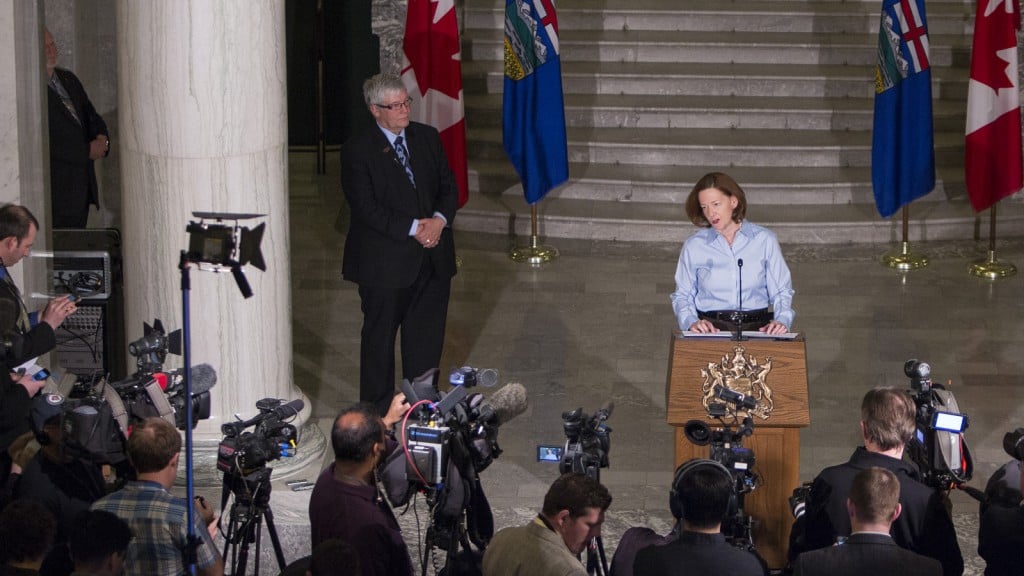 Albertans learned a lot about their former premier’s life of luxury when Auditor General Merwan Saher released his latest report. They saw the full picture of Alison Redford’s many trips on government aircraft, both at home and abroad. They learned of a premier’s office caught up by an “aura of power” that meant its decisions went unchecked by provincial departments that were “wary of challenging” whatever came down from the top.

If they read the report closely, Albertans also learned these five things about a damning report that cemented Redford’s legacy, for now, as one marred by extravagance.

The final figure in Saher’s 68-page evisceration pinpoints the cost of his office’s meticulous accounting of Redford’s expenses. It’s not a small number. The audit cost $485,400, a hefty price tag that outpaced even Redford’s infamous globetrotting in India and Switzerland last January. (Saher’s report says that particular trip, which included the premier’s staff and other MLAs, cost Albertans approximately $450,000). The audit was comprehensive, and the work costs a pretty penny. Accountability doesn’t come cheap.

When Redford asked Saher to probe her expenses, the final refrain in her letter of March 4 sounded so confident, you’d almost excuse her for thinking she’d done nothing wrong. Or maybe it was all an attempt at the ultimate bluff. The letter comprises one of the audit’s appendices, a cruel reminder of her apparent ignorance of what was to come. Her letter’s last words:

Even though the general rule of the Alberta government is that expenditures, where they are necessary, are managed in an effective, efficient and economical manner, like many Albertans, I am concerned with the allegations surrounding expenses and use of the government planes. I am optimistic that your review will assist in securing Albertans’ continued confidence in their government and trust in their elected officials.

When Premier Dave Hancock saw the AG’s final report, it was a matter of days before Redford was out of a job. How any of her former constituents could have “continued confidence in their government” and “trust in their elected officials” after reading the report is almost inconceivable. Maybe they don’t think less of government as a whole, but there’s at least one (former) elected official in whom they likely have little faith. And Redford can’t be surprised at the irony of that optimism. She was on all the flights. Her name was appended to all the expenses. How she could have submitted to an audit and felt anything other than anxious at what might come is stunning.

3. Flying across the world doesn’t have to be complicated.

When Redford attended Nelson Mandela’s memorial service in South Africa last December, there was an easy way to get there and manage her time responsibly: fly on a commercial aircraft to Ottawa; join the federal delegation on the Prime Minister’s aircraft, where there was a seat reserved for her; defer to the PM’s logistics team, who took care of transportation and accommodation in South Africa; and fly home the same way. The AG found evidence that these options were on the table.

Instead, Redford flew on an Alberta government plane to Ottawa, brought her executive assistant and, later, claimed his presence was required, and flew home commercially, claiming that she had to get home in time for a swearing-in of her new cabinet on Dec. 13. The AG’s report made it clear that flying home with the Prime Minister, the costs of which wouldn’t hit Alberta taxpayers, would have gotten her back to Edmonton in time for the swearing-in. Redford later paid back the costs of the South Africa excursion, which totalled $44,254.

The widely repeated line from Saher’s report was its opener, which declared bluntly that the premier’s office “used public resources inappropriately.” Inappropriate though her conduct may have been, the former premier was dealing with sometimes vague rules that left a lot undefined. Saher’s team reported that the government’s aircraft policy does not, for example, “indicate the government’s expectations on partisan and personal use of the aircraft.” The policy also “does not specifically state that user departments should analyze cost-effectiveness or document the absence of scheduled commercial service.” Glaring gaps.

Those kinds of oversights, the AG report says, mean departments that access government aircraft, including the premier’s office, “are left to interpret policy; as a result, they may use the aircraft inappropriately.” Saher doesn’t excuse Redford or her staff, but there’s more to the story than a jet-setting premier.

5. Alberta’s premier could have a cushy penthouse residence.

Redford’s office spent a couple of years working on plans to create a residence for the premier on the 11th floor of the Edmonton Federal Building. The rooms were dedicated to meeting space for the provincial cabinet, but the idea of a “premier’s suite” emerged after Redford’s office requested new plans that included “two side-by-side rooms with bedroom furniture and attached bathrooms.” The specifications included “sleeping and grooming quarters with clothes storage for an adult and one teenager”—i.e., Redford and her daughter. Whatever the merits of that custom-designed suite, the AG says, “That 2012 floor plan continues to be built.” Just another piece of a former premier’s fraught legacy.