Five weeks until the U.S. election. Could it get any worse? 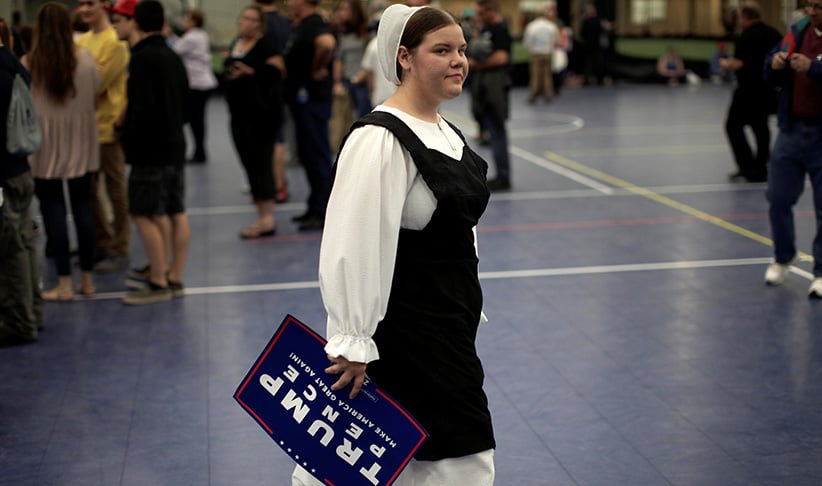 A girl walks into the audience as she arrives for a campaign rally for Republican presidential nominee Donald Trump in Manheim, Pennsylvania, U.S., October 1, 2016. (Mike Segar/Reuters)

Five weeks to go. It’s a dreary, drippy Saturday in the central portion of the southern half of the eastern part of Pennsylvania. Along a country lane called Spooky Nook Road, about 3,000 white people and about 10 non-white people are standing in the rain. In six hours, they will cram a gigantic indoor-soccer facility to receive fatherly wisdom and guidance from their idol, Donald Trump. But for now, all they get is wet.

One of the people in the queue is a long-bearded man in his sixties wearing the broad-brimmed straw hat, black trousers and black woolen jacket that identifies him as Old Order Amish. A dozen other Plain people —the men similarly garbed, the women in their long dresses and bonnets, the teen-aged boys in their suspenders and cereal-bowl haircuts — are further back in the queue.

“I read in the paper that Hillary Clinton wants to take our horses and buggies away,” the man in the straw hat says when a curious reporter wanders along. The man gives his name as Stoltzfus — this is one of the most common surnames among the Pennsylvania Dutch — and he says that he farms 40 acres on the yonder side of Spooky Nook Road, making him the 12th generation of his kinsmen to till this fertile soil since Nicholas Stoltzfus came to William Penn’s tolerant colony from Zweibrucken, Germany, as a legal immigrant in the autumn of 1766.

Precisely two and a half centuries after their progenitor’s arrival, Stoltzfus and his clan somehow manage to live unenlightened by Facebook, Breitbart, Twitter, Snapchat, Fox News and incandescent light. But they know Trump and Clinton.

“Are you not supposed to shun the ways of the temporal world, such as politics?” the Amish elder is asked.

“Our bishops don’t encourage it, but they don’t forbid it either,” he explains. “My grandfather always voted. It is an individual choice. I can vote if I want to.”

“Why have you come to see Trump today?”

“From what I read in the papers, he might be the better of the two.”

“Well, you folks certainly would be experts on horse manure,” Stoltzfus is needled.

Related: In Donald Trump they trust

In a wonderfully preserved 19th-century parlour in a mansion named Wheatland in the city of Lancaster, about six miles from Spooky Nook, three gentlemen are discussing the upcoming presidential election. All are in a state of considerable agitation, and their chief concern is the miring of the United States in an interminable war. But the men are not fretting over Trump and Clinton. They are actors in a living-history performance. In this room, with a dozen tourists eavesdropping, it is October 1864.

One of the actors is playing the role of white-haired James Buchanan, the Pennsylvanian who generally is considered to be the worst president who ever served. It was Buchanan who demurred that slavery was protected by the U.S. Constitution and that, should the Southern states dare to secede from the Union, there was nothing that he could do about it.

It was Buchanan who sent the U.S. Army to make war on the Mormons of Utah, and who let a boundary dispute in the Strait of Juan de Fuca escalate into a conflict with British Canada. And it was the urbane Buchanan who said to his successor, Abraham Lincoln, “If you are as happy in entering the White House as I shall feel on returning to Wheatland, you are a happy man.”

Barack Obama has said of Clinton: “I don’t think there’s ever been someone so qualified to hold this office.” But he forgot James Buchanan of Wheatland, who had served as a state legislator, a member of Congress, a U.S. senator, ambassador to the courts of Czar Nicholas I and Queen Victoria, and secretary of state before accepting the Democratic Party’s nomination in 1856. In fact, Buchanan remains the last ex-secretary of state to gain the White House, pending the returns on Nov. 8.

The man who portrays James Buchanan at Wheatland is a distinguished retired professor of education administration from Temple University named Don Walters. Walters agrees that Buchanan — despite his impeccable qualifications — “wasn’t the greatest president,” but stresses that he had to deal with “a cantankerous Congress,” much like Obama today.

When Buchanan was the U.S. ambassador to the Russian Empire in the 1830s, he was warned by Empress Alexandra Feodorovna that Americans would be “wise to keep out of European troubles, because they had enough of their own at home.” Now, his latter-day likeness says that, “In light of the behaviour of the Russians and Mr. Putin, there is a rather peculiar association between Mr. Trump’s people and some of the oligarchs.”

“When this campaign began, I thought he was just going to start a new TV show,” adds 85-year-old Joyce E. Hendrickson, who plays the role of one of Buchanan’s neighbours. “He’s vulgar, he’s uncouth . . . but I like some of the things he’s saying.”

“When you look at Trump, what do you see?” Buchanan/Walters is asked. 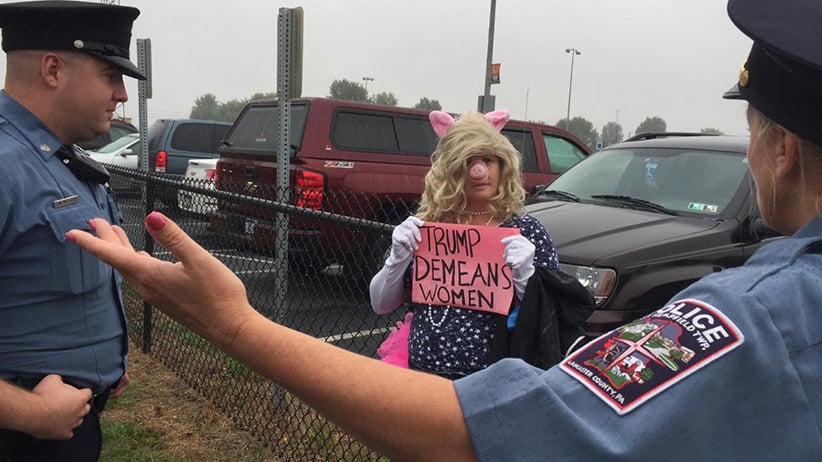 Across the parking lot from the Spooky Nook complex where Trump is to appear, a “free speech zone” has been established. In this sodden pasture, closer to the Stoltzfus cornfields than to the front door of the arena, 17 hardy protesters are making their stand.

One is dressed as Donald Duck; or, with Trump’s still-unreleased tax returns making headlines, as “ducking Donald.” Another is wearing a pink tutu, a blond wig, pointy ears and a snout: Miss Piggy. A little sign she is holding up says, “Trump demeans women.”

“It’s the hate,” says Miss Piggy, who is being portrayed by a woman named Barb Adams, who owns a Lancaster café.

Inside the hall, when the hoi polloi finally are admitted after hours in the drizzly mist, are two cheerful women named Doreen and Judith, who call themselves the Trumpettes. “Hillary’s a criminal and a crook and she makes nice ladies like us look bad,” says Doreen.

“I originally supported Ted Cruz,” admits Judith. “But it was just a matter of time before I realized that Trump had the chutzpah to say the things that needed to be said.”

“I wish he was my father,” Doreen sighs.

“If Hillary wins, I am going to jump on my horse and ride to the White House and jump the fence,” Doreen vows.

“Be careful,” cautions Judith. “She really does have a horse!”

Inside the Spooky Nook sports complex, the non-Plain people are wearing T-shirts that say “Deplorable lives matter,” or “Hillary for prison 2016.” One shirt shows Trump smashing through a pile of bricks meant to symbolize a beautiful wall along the U.S.-Mexican border and the words, “If he builds it, they won’t come.”

Fog delays the Donald. When the audio system replays “You Can’t Always Get What You Want,” “Born on the Bayou” and “Time is on My Side” for the eighth or ninth time, the crowd begins to chant “Turn it off! Turn it off!”

(The Trump-rally playlist is firmly fixed in the year 1970. It is heavy with Rod Stewart, the Rolling Stones, the Eagles and Creedence Clearwater Revival, though not the CCR song that contains the stanza: “Some folks are born silver spoon in hand / Lord don’t they help themselves, y’all? / But when the taxman comes to the door / Lord, the house looks like a rummage sale.”)

Related: Pence, Trump and the human tragedy at the heart of the election

At long last Trump. He has come to Spooky Nook with a purposeful, focused agenda — to exploit Clinton’s behind-closed-doors observation that many of Bernie Sanders’s backers were “children of the Great Recession and they are living in their parents’ basement . . . feeling like you’re consigned to, you know, being a barista or, you know, some other job that doesn’t pay a lot.

“How can Hillary Clinton lead this country when she has such contempt for the people of this country?” Trump demands.

Adherence to the focused agenda lasts about four minutes.

“The world looks at us like we’re stupid people,” he says, bashing NAFTA and the Trans-Pacific Partnership. “It’s time we act like intelligent people.”

And of his opponent:“She could be crazy. She could actually be crazy.

“Hillary Clinton’s only loyalty is to her financial contributors and to herself,” Trump sneers. “I don’t even think she’s loyal to Bill, if you want to know the truth.”

(“She’s nasty, but I can be nastier than she ever can be,” he had told the New York Times the day before.)

Now he calls on the people of the central portion of the southern half of the eastern part of Pennsylvania to go to “certain areas” on Election Day to “watch” the voting. No one needs to explicate which sorts of people live in the “certain areas.”

He is 70 years old, buffeted but defiant, off the rails on a foggy night at Spooky Nook, if ever he was on them, and hinting that his candidacy — “we have a much bigger movement than Bernie Sanders ever had” — may, after all the tumult and the shouting, fall short.

“If we don’t win on Nov. 8, I will consider it a tremendous waste of time, energy and money,” says Trump. Five weeks to go.