Friendly or cold? Careless or practical? What voters see in the federal parties

Innovative Research asked Canadians which human attributes describe the major parties. It's a revealing look at what each does well—or needs to do better. 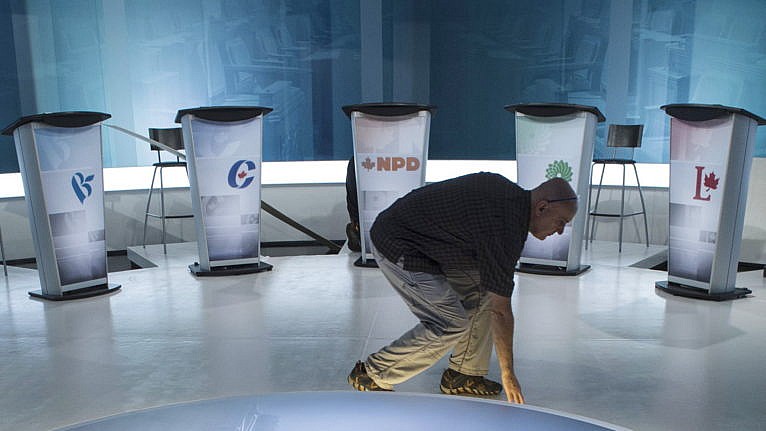 If you imagined political parties as acquaintances or maybe colleagues, Canadians think of the Liberals as confident but rarely quiet; the Conservatives as cold but practical; and the NDP as hardworking but not terribly rugged, according to a new poll released on the eve of the worst-kept secret in Ottawa show business: the imminent federal election call.

Innovative Research Group attempted to unpack federal party brands and Canadians’ feelings about them by presenting people with a series of adjectives typically used in market analysis of consumer product brands—friendly, reliable, confident, careless, imaginative, practical, temperamental, hardworking and so on—and asking them which of the attributes best described each of the parties.

The opinions gleaned from all potential voters, as mentioned above, are intriguing enough. But where it got really interesting was when the polling firm sifted out perceptions of each party based on whether the respondents were supporters or not. It’s like looking at Canadian politics through either the eyes of love or the goggles of partisan antipathy.

To Liberal voters, the party’s top attributes are practicality, confidence and intelligence, while those who will not vote for Justin Trudeau and company are most likely to describe the Grits as careless, confident—again—and cold. Conservative voters describe their party as practical—by a mile, with 51 per cent choosing this descriptor, making it more popular than any other adjective assigned to any other party—hardworking and reliable, while non-supporters see Erin O’Toole’s party as cold, mean and careless.

“On that question of who’s ready to form government, you can really see how the Liberals really own that territory,” says Greg Lyle, president of Innovative. “And for the Tories to be an alternative to the Liberals, they need to get more buy-in to that their side of their personality. The mean and cold, that’s a real limiting factor for them.”

NDP supporters see their party as hardworking, intelligent and honest, while non-supporters describe them as careless, yet also as friendly and hardworking. The Bloc Québécois is perceived as honest, reliable and intelligent to its voters and honest, cold and yet somehow also friendly to those who don’t support it, so it seems that no one feels the Bloc is being duplicitous. To their fans, Greens are intelligent, friendly and practical, and to their non-supporters, they are most often described as unique, careless and original.

“It’s not that friendly doesn’t pop up for the Liberals, but it’s much bigger with the NDP, so you really see the opportunity for the NDP on this sort of ‘Who’s on your side’ type wedge against the Liberals,” Lyle says. “And the fact that they still get words like ‘organized’ and ‘intelligent’ really speaks well to their being seen as a credible set of ideas.”

The branding adjectives help explain what goes into people’s opinions of the parties, but Lyle also looked at overall negative and positive impressions to glean a sense of how people are feeling about their voting options more broadly

Overall, he found that Canadians seem less surly at the moment than they felt in June 2019, a few months before the last federal election, when Innovative’s polling showed that voters had a net-negative view of every party except the Greens—that is, more people disliked than liked them. The Bloc has gone from -16 net favourability rating two years ago to +13 by July 2021; the NDP have moved from -9 to +5 and the Liberals from -10 to +1; the Conservatives, on the other hand, have sunk from -15 to -22, the People’s Party of Canada from -24 to -28 and the Green Party has seen its previous +9 tumble to -8. 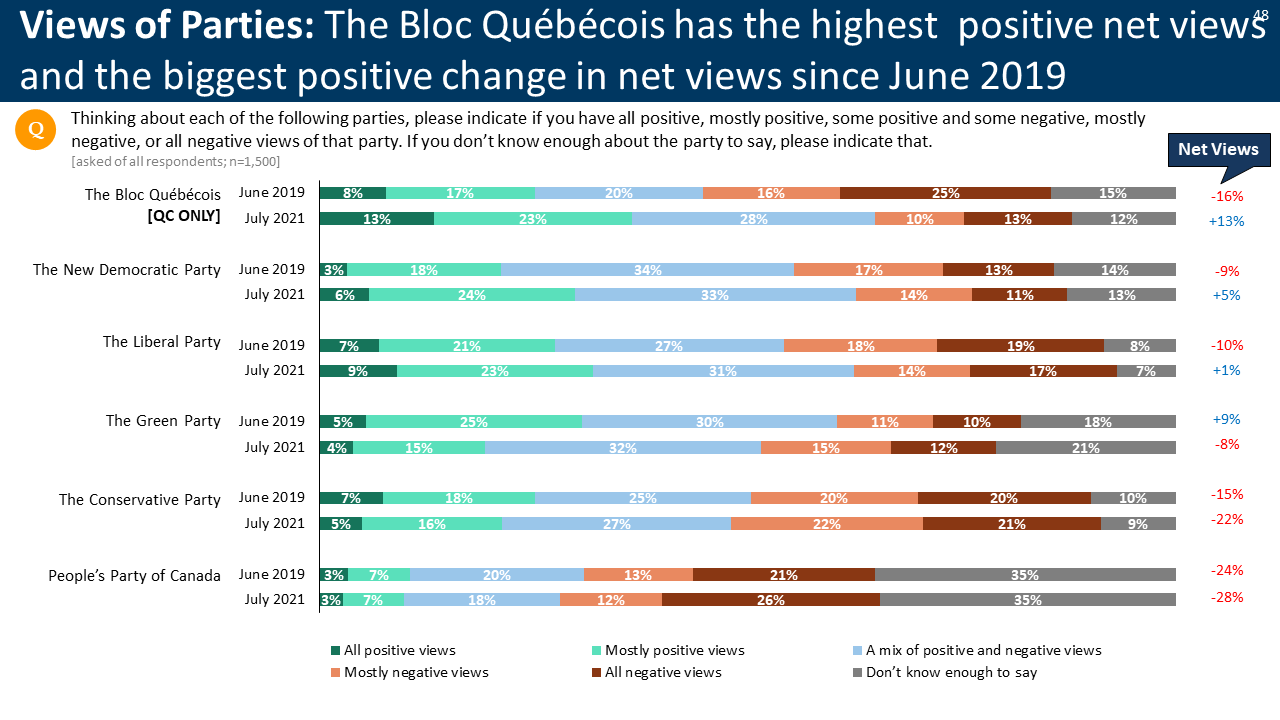 For the Conservatives, sitting at -15 in June 2019 put them in the same ballpark as the Liberals shortly before the last election, but now people seem evenly split over the Liberals, while the Tories sit in the basement. Lyle points out that is a result of losing fans, not gaining enemies. “Most of that is a decline in positives as opposed to a growth in the negatives,” he says.

However, Lyle also asked people whether they thought they personally would be better or worse off with a given party in power. He was surprised that the better/worse net rating was just -10 for the Tories, given that narrower opinion measures like leadership favourability for O’Toole and positive and negative feelings about the party are falling into the -20 range. “People may not like the Tories, but they’re not as afraid of the Tories as the likability measures would suggest,” Lyle says. “And that potentially is good news for the Tories.” 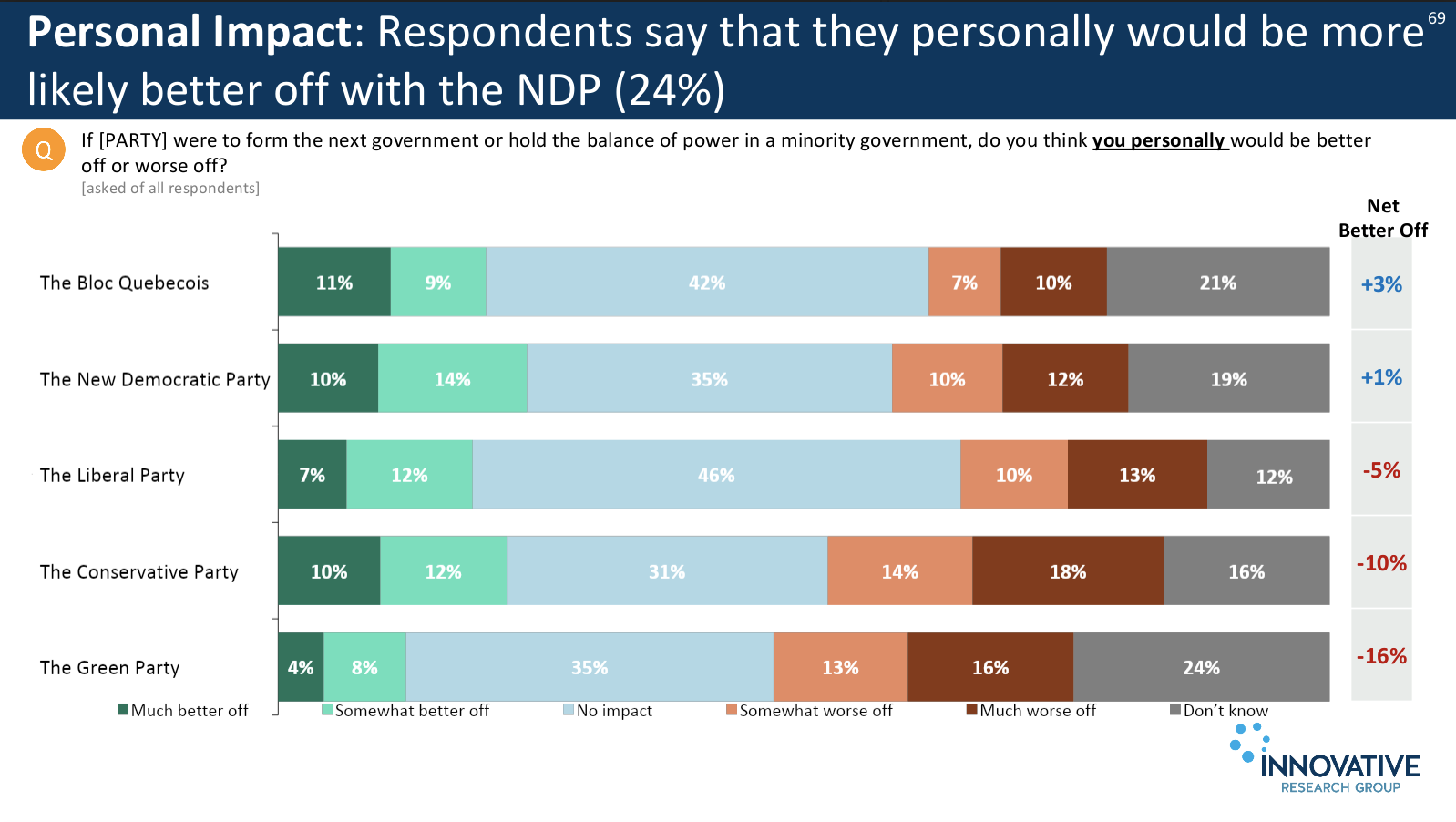 For the NDP, on the other hand, the opportunity lies in the gap between the proportion of decided voters who say they will cast a vote for Jagmeet Singh’s party—which Lyle currently clocks at 19 per cent—and the 24 and 25 per cent, respectively, who say they personally and the country as a whole would be better off if the NDP formed government or held the balance of power in a minority Parliament. “There’s a lot of room for growth for the NDP if they just say ‘Who’s going to make things better for you?'” Lyle says.
And with the Tories far behind, the Liberals’ familiar gambit of shaking the strategic-voting “bogeyman” in the faces of voters to scoop up a bunch of New Democrat swing votes might not be as effective, Lyle says.

Now, if only someone would take a stroll up the driveway at Rideau Hall to get this thing going, we could all see.