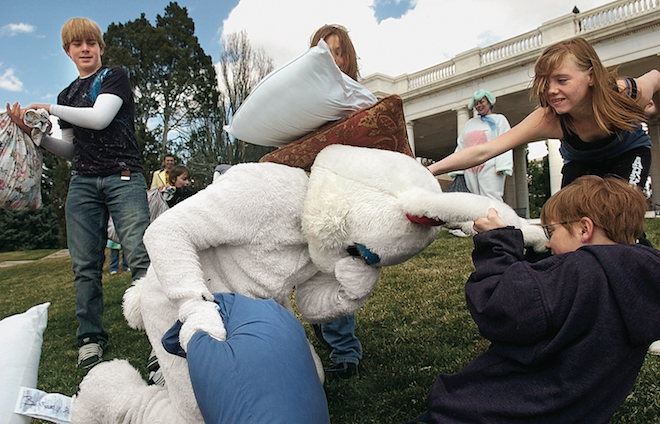 There’s never any shortage of opinions when it comes to Christmas. It’s either too commercial. Or too religious. Or not religious enough.

And like clockwork every December, some school principal, municipal bureaucrat or mall owner generates additional controversy by rewriting a Christmas carol, putting up a festive holiday tree, tearing down a nativity scene or otherwise attempting to alter or obscure some of the countless symbols and meanings of the season. Endless battles in this “war on Christmas” have become as much a part of the festivities as Santa Claus and candy canes.

So where’s the war on Easter?

If most complaints about Christmas arise from the fact that it imposes public observation of a Christian celebration of the birth of Jesus Christ on non-Christians, then any impartial observer should reasonably expect an equal outcry over the same attention paid to a celebration of his crucifixion and resurrection. Yet Easter has maintained its presence on the public calendar without a fraction of the controversy garnered by Christmas.

This week, for example, secular public schools across the country will be giving their students both Good Friday and Easter Monday off, creating a four-day Easter long weekend. (Some provinces have combined Easter with March break this year.) Good Friday is also a federal statutory holiday and observed in all provinces except Quebec, where Easter Monday is the day off. Many stores will be closed Good Friday and either Easter Sunday or Monday. No one seems to complain.

A few over-eager culture warriors have heroically tried to uncover a clandestine Easter-time war. In 2011, for example, Fox News’ Sean Hannity and others claimed proof of a plot against Easter: singer (and professional provocatress) Lady Gaga released a song titled Judas on Good Friday, comedian Ricky Gervais said something insulting to Christians on his website and the tiny township of Munson, Ohio, discussed, but never carried through on, a suggestion to remove “Easter” from the name of its community egg hunt. Like a cheap chocolate bunny, the accumulated evidence rings a bit hollow.

Nonetheless, this absence of a cultural war against Easter seems worth exploring. Is it just a matter of time before Easter finally falls victim to the same secular pressures as Christmas? In other words, will Hannity be proven correct over the long term? Or is there something different about the two holidays?

Certainly, Christmas is bigger, splashier and more significant to the national economy. To those who don’t celebrate Christmas, or believe it should not be celebrated in a secular society, it no doubt feels more oppressive. No one can ignore Christmas, regardless of faith or lack thereof. Outside of the confection industry, the same thing can’t be said for Easter.

This mid-winter festival also attracts a wide variety of interpretations from many different religious, secular and commercial groups all competing and conflicting with one another. In many ways, Christmas is a contested holiday, which may go a long way to explaining why it’s become a war zone. Since Easter has an exclusively Christian significance, perhaps this is how it avoids the broader tug-of-war over meaning.

But there may be even more at work. The pleasant lack of springtime controversy suggests the possibility of a peaceful coexistence between religion as heritage and a secular society. Countless aspects of Canadian life have deep historical Christian roots, including the way we organize the workweek (holidays were, of course, once holy days), common marriage rituals, the national anthem and our judicial and legislative systems, not to mention everyday catchphrases such as OMG and gesundheit.

None of this should be seen as a threat to modern Canadian pluralism or an effort to proselytize non-believers; it’s simply part of our background. Any country that values its history, as Canada should, ought to be able to retain Easter’s place on the calendar without stoking fears of imposed religiosity.

The recent decision by the Canadian Museum of Civilization to revert back to BC (before Christ) and AD (Anno Domini, Latin for “in the year of the Lord”) in its historical displays may be instructive in this regard. Politically correct date markers of BCE and CE (before the Common Era and Common Era, respectively) were designed to erase any sectarian connotations to historical events. Yet these newer formulations still set time relative to the accepted date of Jesus’s birth, as convention dictates. And museum officials say they made the change because BCE and CE were confusing visitors. The traditional time tags thus prove themselves useful because they’re part of our accepted heritage, not due to any underlying religious message.

For Christians, Easter remains a religious event of tremendous significance. For everyone else, it offers a pleasant spring break full of chocolate, generous bunnies and painted eggs. Let’s not ruin it with a war.

FILED UNDER: commercial holidays editorial from the editors religious holidays