Given the choice to sell marijuana or not, the lakeside town of Gimli, Man., opted out. Without a slice of the revenue, what’s in it for them? 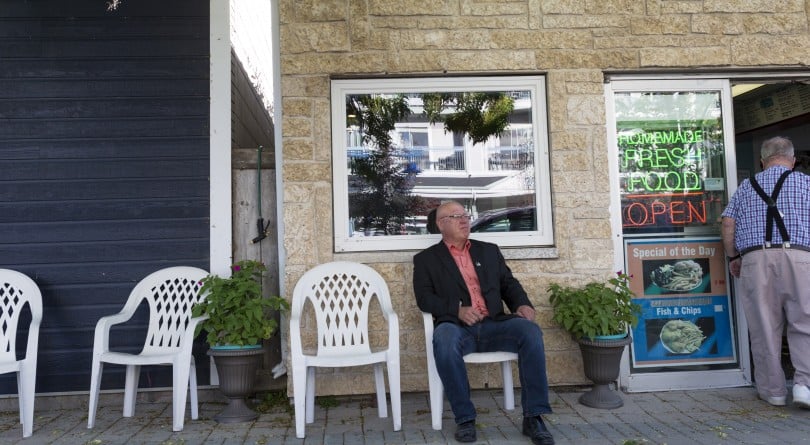 On the shores of Gimli, Man., a popular beach town about an hour north of Winnipeg, sits a tall, bearded statue of a Viking wielding an axe. It commemorates Gimli’s history as an Icelandic settlement, the centre of a region that became known as New Iceland in 1875 and is still the largest harbour on Lake Winnipeg.

These days, the lakeside community of more than 2,000 people is known as a summer party hub for Manitoban tourists and cottagers. And not far from its famous monument, Crown Royal whisky is produced and distributed all over the world—a celebrated town ﬁxture since 1939.

All this to say: Gimli is a fun place.

That’s what makes Gimli’s decision last December even more surprising—come Oct. 17, there’s one substance locals won’t be able to purchase in their town: legal marijuana. Last year, Manitoba issued a survey to its municipalities, effectively allowing them to decide whether retail cannabis can be sold in their towns when it’s legalized this fall. Most municipal councils throughout the province nodded in approval, but some abstained or flat-out said no.

READ: The marijuana nightmare: Trudeau is legalizing weed, but it hasn’t been pretty

Gimli axed the idea. Its local government cited too many “unknowns” surrounding policing, health and social costs related to cannabis. Similar concerns have been raised around the country, punctuating a sentiment among municipalities that Ottawa’s efforts to legalize cannabis, which has been pushed back by several months, are still being rushed. The prohibition of alcohol, for instance, took more than a decade to repeal in some provinces, these communities say.

“We felt there was not enough information given from the provincial government to unequivocally say ‘yes,’ ” says Randy Woroniuk, Gimli’s mayor. Among his main concerns, Woroniuk took issue with the deal reached with Ottawa that gives the provinces and territories 75 per cent of tax revenues from pot sales. (The feds raised the share from 50 per cent, with the expectation that the additional funds will go to municipalities.) He says he’s not sure whether any of that will eventually trickle down to Manitoba towns or simply end up in the province’s pockets.

Listen to Kyle Edwards talk about Gimli on The Big Story podcast.

Gimli, Woroniuk says, would have put its share toward paying for more police ofﬁcers and developing infrastructure. A Probe Research poll at the beginning of the year suggested that 59 per cent of Manitobans believe municipal governments should receive half or more of all cash generated by cannabis taxes. Asked if the province plans to share revenues with municipalities, a spokesperson responded that there will be nothing to give in the ﬁrst year as revenues “will fall short of the expected costs to the province” of legalizing cannabis.

When weed becomes legal, banning licensed retailers will not prevent people from pufﬁng in a particular town—it just means residents will have to go elsewhere to make a purchase. Woroniuk insists he’s not against marijuana. “To me, it’s no big deal. I drink beer, you smoke cannabis—who cares?” he says.

Woroniuk has spent four years as mayor and 20 as a Gimli resident. He describes the community as “conservative-thinking” with “a lot of seniors.” Still, the decision to ban retail marijuana triggered outrage among townsfolk. “I was viliﬁed,” he recalls. Woroniuk went on radio shows to explain himself, and published letters in local papers outlining the council’s position.

But the decision to ban retail pot can ultimately be overturned. Manitoba is also allowing towns to hold referendums to decide the issue, which has led Woroniuk to believe that Gimli may eventually change direction.

The council vote, after all, was not unanimous. Councillor Thora Palson was the single “for” in the four-to-one resolution and considers the decision a mistake. “Think about what comes out of our community,” she says of Gimli’s distillery. “The fact that we’re not prepared to go on this journey as Canada works toward the legalization of cannabis is disappointing.”

RELATED: What Canada’s plan for regulating legal marijuana gets wrong

Some towns in Manitoba voted no for other reasons—they simply oppose marijuana. In Lac du Bonnet, about 125 km southeast of Gimli, residents are haunted by the death of 19-year-old Brittany Bung last October. She was found dead on the side of a highway after giving a man, who was seen acting erratically at the local gas station, a ride in her car, the CBC reported.

Though it appears cannabis wasn’t a factor in Bung’s killing, Mayor Gordon Peters believes the incident could have swayed town council’s 3-2 vote to strike down retail pot. He stresses that drugs already have a presence at the local high school, and the decision, in his mind, was about limiting the “destructiveness of drugs.” Peters views marijuana as a gateway to other substances.

Lac du Bonnet is preparing for weed’s arrival in the community. The municipal government is busy changing its policies for employees who might one day decide to smoke pot while working. When it was announced that marijuana was to be legalized, Peters admits he was disappointed, but he has come to terms with the new law: “We do live in a free country, and I’m prepared to respect the freedoms that we have,” he says.

Peters is recommending that his town hold its referendum on the issue later this year, around the same time as municipal elections. Whether the outcome will be different, he’s not sure. “We’ve been hearing various opinions from the community, on both sides of the issue. This is a community decision,” he says.

Gimli’s Woroniuk is up for re-election in October, and he’s not worried. He refuses to believe this whole saga has hurt his political clout going into campaign season. And when legalization day ﬁnally arrives, Woroniuk doesn’t mind if locals rejoice. He may even be open to celebrating as a community. “We’ll see,” he laughs. “We’ll cross that bridge when it comes.”