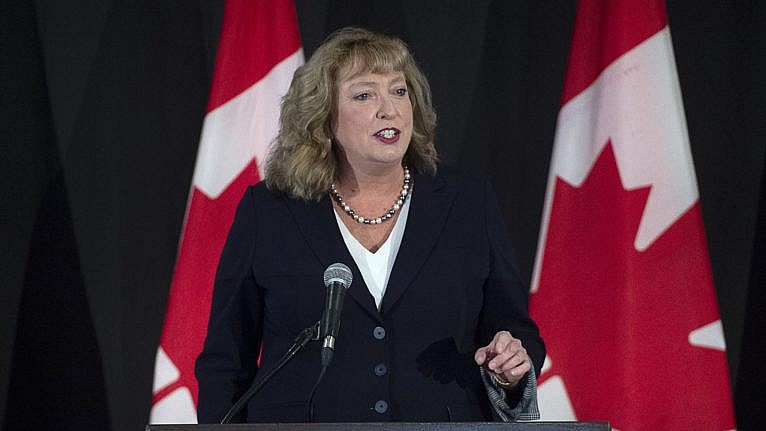 A group of 15 to 30 Conservative MPs and Senators is set to launch a “Civil Liberties Caucus” to advocate for anti-vaxxers who are at risk of losing their jobs, reports Abbas Ranna in the Hill Times.

MP Marilyn Gladu says she will speak for the group, which is likely to be seen as a challenge to the leadership of Erin O’Toole, although Gladu hopes that is not how it is seen.

Ms. Gladu denied the “Civil Liberties Caucus” is aimed to undermine or challenge Mr. O’Toole’s leadership and said she hoped other federal parties don’t exploit this issue as the caucus members are only trying to help their constituents. The group chose “civil liberties” as a name, she explained, because they believe Canadians who don’t want to be vaccinated are not getting fair treatment, and losing their jobs is a violation of their rights. “I would really encourage every MP to listen to constituents in their ridings, because across the country, people are concerned about these things,” said Ms. Gladu, who declined to share the names of other caucus members until next week.

Some unjabbed MPs may try to take their seats in the House!

“I’ll tell you this: Nov. 22, can be a very interesting day,” said one Conservative MP who spoke to The Hill Times on not for attribution basis to offer their candid opinion. “Because I believe there are Conservative Members of Parliament who are unvaccinated who are going to try and get into the Parliament buildings anyways. So, they’re not going to follow the rules, despite what we’ve decided as a caucus. And what happens after that? I think they’re going to be kicked out of caucus.”

Tricky position: Global’s Alex Boutlier has some good behind-the-scenes stuff on the difficult caucus dynamics that O’Toole faces, which may not get easier if some of his MPs are determined to break his policy on vaccination.

NDP-LPC talks: The chiefs of staff to Justin Trudeau and Jagmeet Singh are having “informal talks” about a three-year supply arrangement, La Presse reports (translation), which would allow the Liberals to avoid falling on a confidence vote, if they can reach a deal.

“There is a long way to go from the cup to the lips”, underlined a source in the NDP camp, insisting that there is a certain mistrust towards the Liberals, who make promises in election campaigns and dismiss them once in power. The reform of the voting system and the creation of national drug insurance are two examples.

Your correspondent reported on preliminary strategizing around such a deal in Maclean’s last week.

Bring in civilians: Anita Anand announced on Thursday  that she has “accepted in full” a recommendation from Louise Arbour that civilians should handle military sexual misconduct cases, Amanda Connolly reports for Global. Anand is ready to get to work.

Anand said the reports about her as a contender sparked her to prepare for the role. “I actually had a to-do list of my own ready in case I was indeed sworn in as minister of national defence,” she told Global News. “And when that occurred, I pulled out my to-do list and I reviewed it with the acting chief of staff as well as my deputy minister on Day One, and have been working steadily on it since that time.”

Plante ahead: In Maclean’s, Philippe J. Fournier reports on a Mainstreet poll that shows Valérie Plante has a lead over Denis Coderre in the Montreal mayoral race for the first time in two years, and might win on Sunday.

With only one more day of campaigning left before voters head to the polls this weekend (voting will take place on Saturday and Sunday), a new survey from Mainstreet Research suggests that Valérie Plante has taken the lead in this race for the first time in a municipal poll—from any firm—since fall of 2020. Let’s take a look at Mainstreet’s numbers. Among the full sample of respondents, Valérie Plante has the support of 46 per cent of respondents, compared to 40 per cent for Denis Coderre. Balarama Holness trails far behind in third place with only 5 per cent support. Of the 850 respondents to this poll, 7 per cent were undecided.

For a sense of what is at stake in this race, have a look at this item from Paul Wells from earlier this week.

Best wishes, premier: John Horgan said Thursday that the growth in his throat is cancerous and he will have to undergo radiation treatment, the Vancouver Sun reports: “The surgery and biopsy that were done last week were successful and I am grateful to the amazing health-care team for all the support I’ve received. The pathology confirmed that the growth in my throat was cancerous.”

Horgan stressed that his prognosis is good and he expects to make a full recovery.  He will need to start radiation treatment in the next couple of weeks. The premier expects to have completed the treatment toward the end of December. “During that time, I will continue to participate virtually in briefings, cabinet meetings, and other important meetings like the Council of the Federation. For in-person events, minister Mike Farnworth and other cabinet ministers may attend in my place,” he said.

Fear in Kabul: The Globe has a harrowing story about Afghans who worked with the Canadian military who will soon be homeless because the volunteer-led groups that have been funding their safe houses are running out of money.

Joly gets ready: Susan Delacourt has an interview with Mélanie Joly in the Star, in which she reveals that her mentor is Frank McKenna, and that she is busy hitting the briefing books, getting ready to, we hope, successfully face down avaricious Americans who threaten the Canadian auto industry.

No French: Allison Hanes has a good explainer in the Montreal Gazette outlining the catastrophic PR miscue by Mike Rousseau, the new CEO of Air Canada, who has managed to upset the delicate balance of language relations in Montreal by admitting that he has lived in Montreal for 14 years but can’t speak French, seemingly at all.

Even the Quebec Community Groups Network, the defenders of English-speakers’ rights, issued a caustic statement denouncing of Rousseau’s “tone-deaf” and “narrow-minded” comments. QCGN president Marlene Jennings lamented that his remarks inflicted “lasting damage on Quebec’s English-speaking community and the core national value of linguistic duality.” Indeed, as Quebec anglophones are trying to show they, too, care about protecting French while still safeguarding their rights and institutions, Rousseau went and undermined every argument the community used to show Bill 96 is unjustified.

For a cap: CBC’s Aaron Wherry has a thoughtful column explaining how an oil and gas emissions cap can help Canada bring emissions down, a difficult but necessary step.

First out lesbian: Liberal rookie Pascale St-Onge, who won a nail biter in Brome-Missisquoi, became the first out lesbian in a Canadian federal cabinet when she was sworn in as minister of sport, CTV’s Rachel Aiello reports in an interesting profile. St-Onge may also be the first cabinet minister who played bass in an alternative band, Mad June.