Election Image of the Day: Jagmeet Singh's wife manages to be supportive without seeming as old-fashioned as the concept, itself 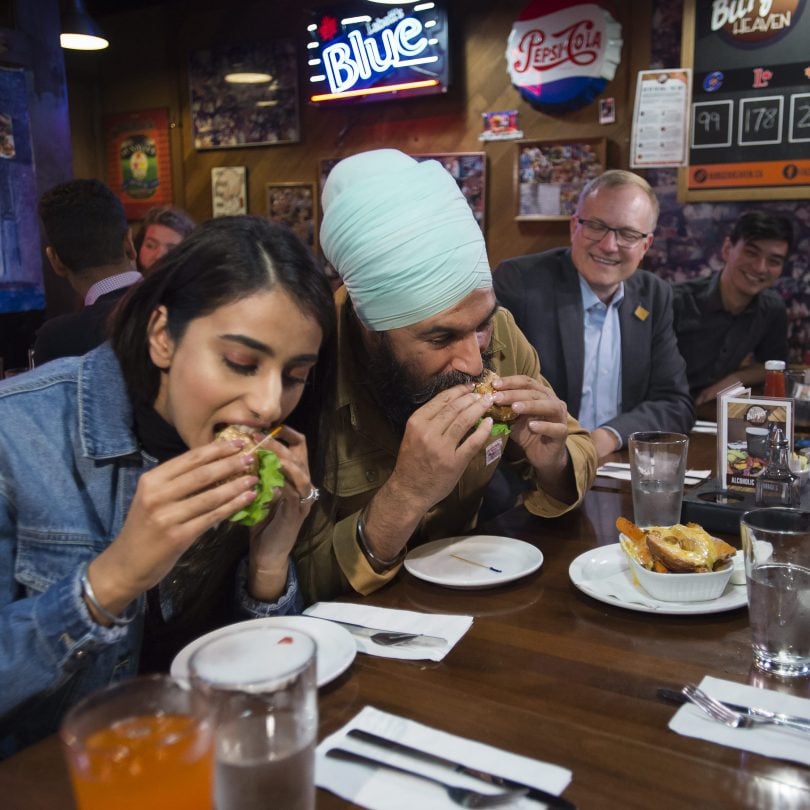 Kaur and Singh at Burger Heaven during a campaign stop in New Westminster, B.C (Nathan Denette/CP)

In a country where unmarried prime ministers have been few and far between, a political spouse like Gurkiran Kaur has a difficult role. She must look and act supportive, but not seem as old-fashioned as, well, the concept of a political spouse. But Kaur, who married Jagmeet Singh in 2018 (one of two party leaders who had a wedding last year, along with Elizabeth May), is a successful fashion designer, so she knows how to dress for a photo-op. On this Monday visit to Burger Heaven in New Westminster, B.C., she and Singh wear informal-looking jackets, the traditional apparel of the politician who wants to seem at home under a big beer sign. But while they bite into some version of the Singh Burger (it’s trying to “ketchup’ with the other parties,” Burger Heaven says), they’re wearing different colours and even their cuffs take different populist approaches: hers look frayed; one of his is open. It’s a similar-but-different approach that contrasts with some recent photos where Sophie Grégoire is visibly better-dressed than Justin Trudeau, like on this trip to Singh’s own riding. As to which approach works better, we may have to wait for Burger Heaven’s “(B)un-official survey.”

Correction: The original version of this post incorrectly stated that Canada had had an unmarried prime minister for only five months.