Harper on CPP: it's about individual responsibility

As clue about why the government is rejecting CPP expansion 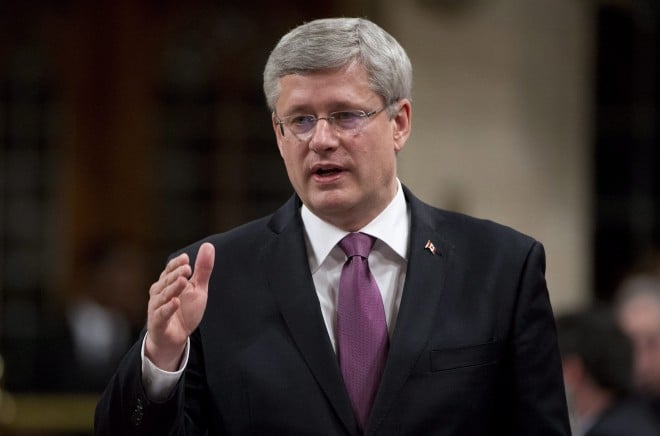 This week started with a tense standoff between Finance Minister Jim Flaherty and his provincial counterparts over the Canada Pension Plan, and ends with the Prime Minister going a long way toward explaining, I assume quite unintentionally, why that meeting was so unproductive.

The federal-provincial finance ministers’ get-together was held on Monday near Ottawa in the Gatineau Hills at Meech Lake, where the mood was, by all accounts, not in keeping with the spirit of the festive season. Here’s how Ontario Finance Minister Charles Sousa summed up the way Flaherty and Kevin Sorenson, the junior federal minister of state for finance, took charge: “It was a unilaterally run meeting without consensus and without deliberation with the other ministers.”

The problem was that the provincial ministers showed up mainly wanting to talk about expanding the CPP, by hiking employee and employer contributions to fund more benefits for retirees decades from now, and Flaherty and Sorenson wanted no part of any such discussion. Sousa currently chairs the provincial ministers’ group, and so he had planned to do a lot of talking on behalf of them about the need to get moving by studying options for expanding the CPP, and perhaps other pension reform ideas, too.  But Sorenson (who was chairing the meeting since Flaherty, who appeared quite ill that day, was nursing a sore throat) made it clear the feds didn’t really want to hear Sousa out.

Later that day, Flaherty interjected to put a stop to any further talk of the ministers emerging from their meeting to announce they had agreed to look into alternatives for CPP reform. Sousa said Flaherty’s blunt position was, “We’re not doing this; we’re done until the economy improves.” And that would be fully consistent with what Flaherty and Sorenson had been saying publicly before the closed-door confab with the provinces—that a CPP premium increase, which they term a “payroll tax” that would “kill jobs,” can’t be contemplated until the economy is less “fragile.”

That position has puzzled me. After all, Flaherty fully supported a CPP expansion back in the spring of 2010, and only retreated when Alberta wouldn’t come on side with the plan. The fragility of the economy didn’t seem to overly worry him at the time, even though the 2009 recession was then a much fresher memory. Why is it a deal-breaker today? As well, even if Flaherty detects economic vulnerability just now, all the serious CPP expansion proposals would have premium increases phased in over several years, perhaps starting in 2015 or 2016. So prospects for growth this quarter or next aren’t really the issue.

A more compelling explanation for the federal government rejecting even the study of CPP expansion is that some key Conservatives recoil from the notion, not because of how they read current conditions, but because of their deeply held convictions about the responsibility of individuals to take care of themselves. And this happens to be precisely the position Prime Minister Stephen Harper staked out in a year-end interview aired this evening by Global News.

Asked by Global’s Jacques Bourbeau about the pension debate, the Prime Minister made no mention of the purported fragility of the economy and its ability to absorb a CPP premium hike. Instead, Harper went straight to the ideological heart of the matter, after a bit of throat-clearing about the low rate of poverty among Canadian seniors and the fact that many Canadians, between their own savings and their company pensions, are “in very good financial shape for their retirement.”

“The more worrisome group,” Harper went on, “is a group of people who have reasonably affluent lifestyles but just don’t save. They have the opportunity to do so, so I don’t think the challenge is to raise CPP taxes on everybody. It’s to try and figure out how to get the people who actually need to save to do the saving they need to do.”

Contrast the Prime Minister’s view of the problem at hand with what his finance minister said early last month when asked by reporters in Toronto about boosting the CPP. “I can see it being good in the long run for Canadians, at the right time,” Flaherty said. “But I would want to see significantly more economic growth than we have now before we imposed an additional burden on Canadian employers and employees.”

Yet Harper didn’t breathe a word about the ostensible challenge of carefully timing CPP premium increases so they occur when the economy is in better shape. He sure didn’t indicate that he thought doing so might be “good in the long run.” No, he rather bracingly defined the the challenge as getting through to that minority of Canadians don’t save enough even though they “have the opportunity.”

There’s plenty in Harper’s stance to argue about, of course. But he has at least cleared up the terms of this important debate by explaining the fundamental underpinning of his government’s position. The real reason Flaherty couldn’t talk through the matter fully with the provincial finance ministers seems to have had little to do with the timing or mechanics of CPP expansion, or the present state of the economy.

Instead, the Prime Minister frames the issue in terms of what sorts of things individuals should do on their own and when the state should step in. This is not the sort of stuff finance ministers typically hash out, but an excellent topic for voters to consider during an election campaign.