Sure, our PM is growing suspicious, isolated and rage-prone. Otherwise, great guy. 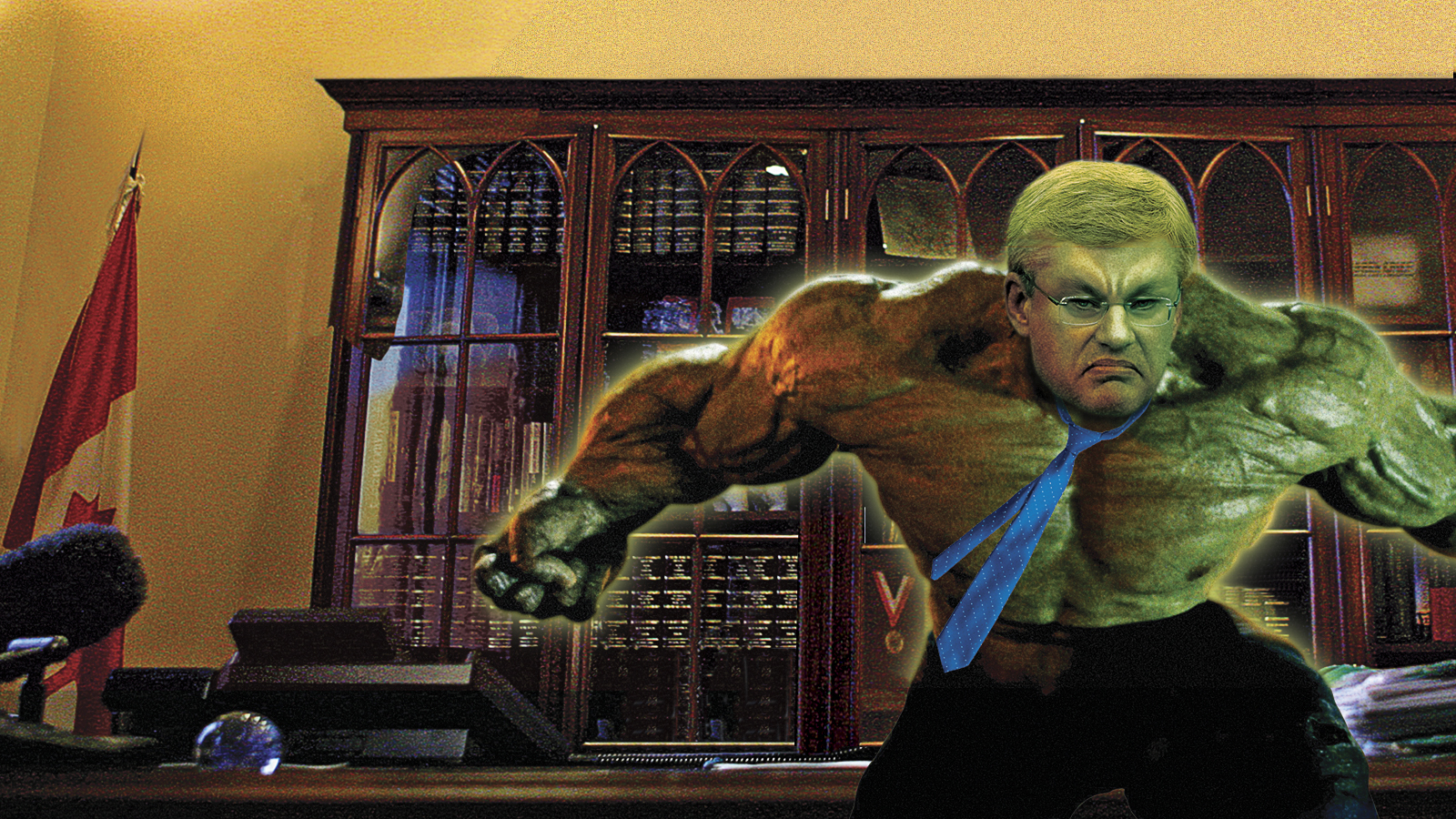 What’s the deal with our PM? Lately, Stephen Harper has been picking a lot of fights—with rivals, with the Ontario premier, even with the chief justice of the Supreme Court. I’d hate to be the drive-through speaker at Wendy’s right now.

Voice: Please pull up to the first window.

Harper [strangling speaker box]: NO ONE IS THE BOSS OF ME.

And then there are some of his former advisers, who’ve gone public with unflattering observations of Harper’s management style and character traits.

Bruce Carson, a senior aide from 2004 to 2009, said the PM is becoming increasingly isolated and is prone to losing his temper and shouting profanity at underlings. Meanwhile, Tom Flanagan—a key player in Harper’s rise to power—used the pages of his latest book to describe the PM this way: “He can be suspicious, secretive, and vindictive, prone to sudden eruptions of white-hot rage over meaningless trivia.” Other than that, great guy.

Flanagan goes on to claim that Harper at times falls “into week-long depressions in which he is incapable of making decisions.’’ So basically, he’s Nixon without the charisma, or Hamlet with more hmm.

Gerry Nicholls—who worked closely with Harper a number of years ago—tried to defend the PM, saying, “Only once did I see him erupt at somebody, and he later told me it was just an act. He was trying to send that person a message.” Riiiight—the old “I was totally just kidding about having an inherently volcanic nature” excuse. I believe that’s the “I have a black friend” of temper denial.

These kinds of “behind-the-scenes” disclosures are bound to happen when you go through staff the way Harper does. The PM has more former communications directors than Ryan Gosling has current abs. But let’s not read too much into these revelations. From time to time, we all get a little grumpy and recklessly impugn the character of the chief justice of some court or another. Plus, there are pros and cons to any leader’s temperament. Harper’s isolation affords him the opportunity to keep an eye out for those troubles lapping at our shore, like some fiscal lighthouse keeper of yore. EU credit market deterioration, ho!

Still, there are political implications. Whether he likes it or not, Harper is carving out a reputation as a cross between Howard Beale and Howard Hughes. I’m as mad as hell and I’m going to let my fingernails grow as I sit alone in this darkened room!

Meantime, NDP Leader Thomas Mulcair is so prone to fits of rage that he’s acquired the nickname Angry Tom—which, by the way, is a pretty lazy nickname. Wouldn’t it be catchier to call him Tommy Tantrum or Beardy McFurious? Angry Tom sounds like a cartoon monkey or a hot sauce.

Anyway, the point is: All this indignation and spleen opens the door for Justin Trudeau to make demeanour a major wedge issue in the next election. He just needs to be likeable and avoid public demonstrations of angry finger-pointing or tirade sweat.

And he should come up with some policies that speak to an easygoing manner. When I am prime minister, not only will smiles be free—but also handshakes, high fives and bro hugs. And I’ll keep a positive vibe going across the country by introducing a National Bummer Registry. Have you lost weight, Canada?

For some time now, there has been speculation about when Harper is going to retire. Some have convinced themselves that our Prime Minister, after more than eight years in office, must, on some level, be eager to bid adieu to public life and return to his first love: warning small children to keep off his property.

That’s great and everything, except it overlooks one key question: Why would Stephen Harper retire? What’s he going to do instead? Launch attack ads against the weeds on his lawn? (“Dandelions: not a flower.”) This is a man who loves power, loves being the decider, loves showcasing his smarts. There aren’t a lot of jobs out there for hermetic autocrats. (I can think of two others: CEO and Unabomber.)

So yes, maybe Stephen Harper seems a little withdrawn and miserable these days. But he is always going to be that way. Right now, this job—it’s likely the most happiness that being miserable is ever going to bring him.