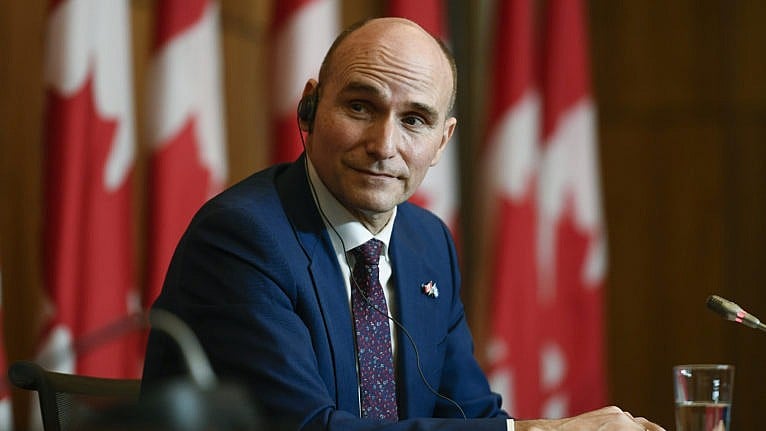 Minister of Health Jean-Yves Duclos participates in a news conference on the COVID-19 pandemic and Health Canada’s approval of the antiviral treatment Paxlovid in Ottawa, Jan. 17, 2022. (Justin Tang/The Canadian Press)

Limited supply: Health Canada approved Pfizer’s antiviral treatment for COVID-19 on Monday, but supplies of Paxlovid are limited, so the Public Health Agency of Canada is asking provinces to prioritize the people most at risk of serious illness, CP reports.

Clinical trials showed the treatment, which helps prevent the SARS-CoV-2 virus from reproducing in an infected patient, was almost 90 per cent effective at reducing hospitalization and death in high-risk patients if given within three days of infection, and 85 per cent if given within five days. The medication requires three pills at a time, twice a day, for five days. It is the first oral COVID-19 treatment that can be taken at home to be approved in Canada but Tam admitted there may be some logistical challenges getting the drug to the right people quickly enough.

Unserious: Chinese health authorities have claimed that Omicron was introduced to a resident of Beijing through a piece of mail from Canada, which experts say is ludicrous, CP reports. A Chinese news outlet first reported that the Jan. 7 infection of a Beijing resident was the result of mail from Canada. Margaret McCuaig-Johnston, a China expert at the University of Ottawa,  said that’s an absurd suggestion: “Unlike the early days, scientists have clarified that it does not stay on surfaces. To suggest that it would be on mail that came over days from Canada is ludicrous.”

Testing goes on: The global Omicron wave is too severe to drop mandatory COVID-19 tests for air travellers arriving in Canada, Jean-Yves Duclos said Monday, the Star reports. Earlier Monday, Pearson airport, Air Canada and WestJet published an open letter to Duclos, asking him to drop the testing requirement and shift testing resources to other settings, like schools. Duclos said no: “At the moment, it’s not going to happen. We are probably, in Canada, not even at the peak of infections.” Some experts argue the testing requirement makes less sense now that Omicron is so prevalent that provincial testing regimes can’t keep up with infections.

Bad call: The Alberta NDP is calling for Justice Minister Kaycee Madu to resign after learning he called Edmonton’s police chief after receiving a distracted driving ticket, the Calgary Herald reports. CBC News reported Monday that Madu was pulled over on March 10, 2021 and fined $300 for being on his cellphone in a school zone. He later called Edmonton police Chief Dale McFee to discuss the ticket.

No foul: The federal ethics commissioner says Dominic Barton, Canada’s former ambassador to Beijing, did not violate ethics rules when he accepted an offer to chair Rio Tinto, the Globe reports. Two NDP MPs asked for a probe, suggesting Barton was in breach of the Conflict of Interest Act because he met with executives of Rio Tinto shortly before the end of his time as a diplomat. But Mario Dion found there was no violation because Barton “did not have direct and significant dealings with Rio Tinto while he was Canada’s ambassador in China,” a spokesperson said.

Troops in Ukraine: Canadian special forces have been deployed to Ukraine amid rising tensions between the NATO military alliance and Russia, Global News reports. Sources told Global that the deployment is part of an attempt by NATO to deter Russian aggression in Ukraine.

Distracted driving? Doug Ford was mocked and praised for acting as “taxi” and “snow plow” during a massive snow storm in Toronto on Monday, Yahoo reports. There was so much snow in the city, that the school board cancelled school for two days straight.

Good news: John Horgan has completed cancer treatment, the Vancouver Sun reports. “They had the phasers on stun and my treatment is complete,” Horgan said in a handwritten note he posted to Facebook on Monday. In October, Horgan announced that he had discovered a lump on his neck and that doctors recommended a biopsy.

Election promise: In the heat of the election campaign this fall, the Liberals promised to “table legislation to ensure that every business and organization that decides to require a proof of vaccination from employees and customers can do so without fear of legal challenge,” Campbell Clark reminds us in the Globe. Such legislation might be useful to companies dealing with a raft of such lawsuits, except that four months later there is no sign of the legislation, and likely never will be.

Bile machine: Susan Riley, writing in the Hill Times, laments that Erin O’Toole, “a formerly likeable, middle-of-the-road backbencher and junior minister in Harper’s government—is behaving like an unhinged bile-machine.” He may be bad, she concludes, but the alternatives seem to be worse.

First to be second: Alexa McDonough’s main achievement at the national level could lie in her 1995 victory as the second woman to be elected to lead a federal political party, writes Susan Delacourt in the Star. Delacourt points out that the challenge for women isn’t getting the big jobs — it’s keeping them there.