Election Image of the Day: While the other federal leaders marched with climate change protesters, the Tory leader unhatched his plan to widen roads—which he said would cut emissions (it won't) and reduce commuter idling (it won't) 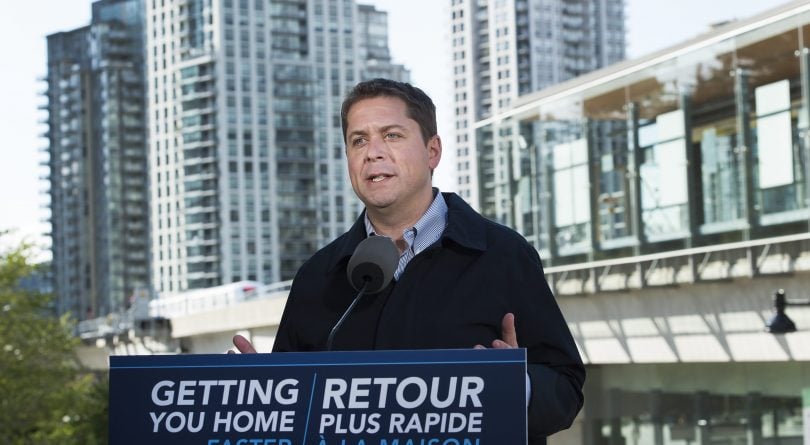 While three major party leaders marched with climate protesters today—Justin Trudeau and Elizabeth May in Montreal, where teenage activist Greta Thunberg joined (and met with Trudeau, only to criticize him to the media afterward), and Jagmeet Singh in Victoria, B.C.—Andrew Scheer took a different path. Instead of marching for climate action, he flew to Vancouver to announce plans for infrastructure upgrades in urban areas, specifically targeting suburban commuters. In addition to a new road tunnel in Montreal and funding for Toronto’s woefully overcrowded subway system, Scheer promised to prioritize the expansion of a popular B.C. tunnel from four lanes to eight. Doubling the tunnel’s capacity, he claimed, would not only save commuters time, but also reduce carbon emissions. But—wait, what? A reporter pressed him on the allegation, and he doubled down. “When you have a tunnel that does not have the capacity to handle the number of motorists who use it, that means there’s huge backlogs, and lots of time spent idling or moving very slowly, that leads to higher emissions,” he explained. It’s unclear whether Scheer has ever read a city-planning book in his life, or has heard of “induced demand,” the observable phenomenon that expanding road capacity actually increases traffic by encouraging drivers to use it. This has been proven time, time and time again. But let’s be honest: nobody’s voting Conservative because their top priority is climate change.